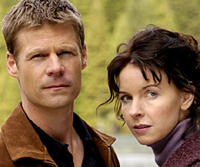 The 4400 (USA, Sundays, 9 p.m.)
This is exactly the kind of show that I wouldn't have the patience for during the regular season, but over the summer it's just good enough to keep me coming back. Last year's debut season told a fairly complete story in six episodes, so this season feels at times like the writers just unraveling threads with no clue as to where they're going to go. This week's episode hit a stride in several ways, though, with almost all of the primary characters actually present at the same event for the first time this season, and Richard and Lily's overlong on-the-run storyline finally in the past. I like that they have opened up a whole can of worms with evil baby Isabelle, and that there's a more intricate ongoing plot than just the 4400-of-the-week. A lot of the dialogue is still pretty stiff (along with the acting), and the show is far from subtle, but there's at least one exciting thing each week that makes me interested in coming back for more. Plus I still miss The X-Files.

The Closer (TNT, Mondays, 9 p.m.)
This has fast become my favorite show of the summer, and one of my favorite shows on television, period. I normally have no interest in police procedurals, but this has far more going on than crime-of-the-week stories. Honestly, the cases are not all that fascinating - I mean, they're interesting enough to hold my attention, but I doubt they're breaking any new ground when it comes to TV cop shows. What I love on this show is the characterization and dialogue, especially from Kyra Sedgwick and the great JK Simmons. There are so many little moments between Brenda and her co-workers that so perfectly bring out who they are that I really couldn't care less what criminal they are chasing this week or whether they'll catch him. It's possible the police stuff will eventually drive me away, but as long as we keep learning a little bit about these people every week, I have a feeling I won't ever get bored. 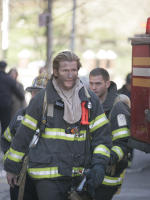 Rescue Me (FX, Tuesdays, 10 p.m.)
Unlike so many rapturous TV critics, I was a little lukewarm on this show last season. It has a lot of things going for it, but over the course of the summer I got incredibly tired of watching a group of reprehensible people doing awful things. There is not a single character on this show that I remotely like or care to see do well. So far this season has continued to be unpleasant, with the added problem that the humor is barely there anymore, and a lot of the plotlines are horribly cliched. The main redeeming factor last season was the show's unpredictability, but now we've got a stalker, a guy addicted to pain pills and a romance between co-workers, and so for they're going exactly where you'd expect. Once the grittiness (aka swear words and sex) becomes routine, there's a lot less here than some people seem to think. On the other hand, I'm still watching because there is a certain interesting truth to the characters, no matter how terrible they are as people. The writers can't write women for shit, and this is a horribly misogynistic show under the guise of "that's just how people talk," but as an exploration of the basest and most repulsive forms of male bonding, it still has a strange appeal.
Posted by Josh at Sunday, July 10, 2005

I really think The 4400 is building up to something. I didn't think so until this episode, but now I'm sure of it. At any rate, there's so much potential that the writers would have to be idiots not to have some big twists coming up. (And an evil baby with malicious psychic visions? How cool is that?)

I really want to believe that you're right, but this whole season has seemed very haphazard, and any time the random 4400 of the week shows up, they always just say, "Well, clearly this person's power will have some important consequence that we have yet to foresee." I worry that the writers are totally winging it, although I admit that this last episode, with its convergence of various plot threads, made it look like things are going somewhere. I sure hope so, but I remain skeptical.