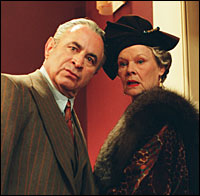 Mrs. Henderson Presents (Judi Dench, Bob Hoskins, Kelly Reilly, dir. Stephen Frears)
My review in Las Vegas Weekly
It's truly ridiculous that Judi Dench got an Oscar nomination for this role, which is the very definition of coasting. Otherwise, I have no problem with this movie. It's hokey and inconsequential, but it has its charms, and if all you want to do is watch Judi Dench be Judi Dench and see some naked breasts along the way, then have at it. Opened limited Dec. 9; in Las Vegas this week 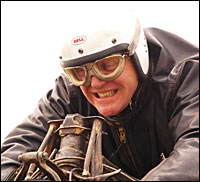 The World's Fastest Indian (Anthony Hopkins, dir. Roger Donaldson)
My review in Las Vegas Weekly
I really have no problem with this movie, either, even though I gave it a slightly more negative review. It's kind of plotless and rambling at times, which makes it a little less compelling than Mrs. Henderson, but Hopkins gives a really nice and subdued performance for once, and, again, if you want to watch Anthony Hopkins be Anthony Hopkins and see some fast motorcycles along the way, then have at it. Opened limited Dec. 7; in Las Vegas this week
Posted by Josh at Friday, February 03, 2006