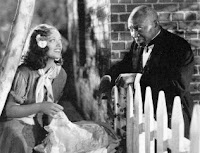 It's sort of shocking to see this movie right now, just airing in the middle of some random weekday on TCM (it's also available on a Warner Archive DVD), with its extensive and prominent use of blackface that takes up almost the entire first half of the film. I'm used to the occasional use of blackface in a musical-comedy capacity in films like Holiday Inn, and even in those cases it's hard to take. But Operator 13 puts star Marion Davies in blackface as an integral part of the plot, an ostensibly serious story about Union spies during the Civil War, and then takes the opportunity to have her play a horrific caricature of an African-American woman. Offensiveness aside, the jarring tonal disconnect is just one of this terrible movie's many faults. 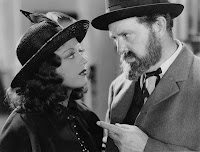 Davies plays actress Gail Loveless, who's recruited by the U.S. government and given the titular designation as a covert agent, sent to infiltrate a Confederate camp while posing as the black maid of another actress-turned-spy. Not only is Davies' performance a crude stereotype, but her makeup is also so unconvincing that it's hilarious to hear other characters dismiss her as a "colored girl" when she looks like a white woman covered in shoe polish. Davies affects a comically exaggerated "Negro" voice that clearly would fool no one, certainly not all the actual black people who take her on faith as one of their own. 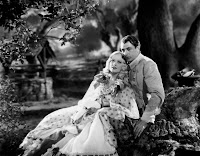 That debacle occupies the first half of the movie, but when Gail's fellow agent gets her cover blown, Gail ends up on a new mission, this time as her normal Caucasian blonde self, posing as a Northern Confederate sympathizer taking refuge in the South. There she re-encounters a handsome Confederate officer played by Gary Cooper, and they of course fall instantly in love. The movie doesn't spend a whole lot of time on the star-crossed-lovers angle, though, and the two characters share virtually no romantic moments, instead just blandly declaring their love for each other before being forced to part ways. The movie ends with the abrupt and unexplained reconciliation of the lovers following the war, which is dispatched in a montage lasting about 30 seconds. Disjointed, unconvincing and frequently offensive, Operator 13 is barely even worthwhile as a historical curiosity.
Posted by Josh at Wednesday, June 13, 2012