Often touted as the punk-rock answer to This Is Spinal Tap, Bruce McDonald's mockumentary Hard Core Logo is a lot darker and more serious than Rob Reiner's heavy metal satire, and its mix of goofy humor and bleak character study doesn't always fit together smoothly. There aren't a whole lot of full-on laughs in the story of an influential but forgotten Canadian punk band getting together for a short reunion tour, but the low-key humor can be satisfying, especially when it's pointing out, as Spinal Tap did effectively, the disconnect between the band members' conception of their own importance and the reality.

It's easy to laugh at the delusional self-conceptions of Hard Core Logo frontman Joe Dick (Hugh Dillon) and guitarist Billy Tallent (Callum Keith Rennie), both of whom fancy themselves the main creative force behind the band and important musicians in their own right. But it's harder to buy into the deeper emotions that McDonald tries to sell, the pathos of these aging rockers whose potential windows of stardom have passed them by. The mockumentary format precludes showing the most raw, intimate moments, so when Joe takes drastic, violent action at the end of the movie, it seems to come out of nowhere just to provide a shock moment for the movie to end on. 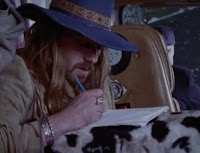 The other two band members are even goofier than Joe and Billy, which makes their serious moments even less convincing. It can be fun to watch the antics of spacey bassist John Oxenberger (John Pyper-Ferguson) and dim-witted drummer Pipefitter (Bernie Coulson), but their subplots don't fit in as well with the overall narrative. John in particular ends up in such a dark place that his earlier comic-relief moments are sort of soured. The characters overall seem to hit rock bottom as the movie ends, kind of knocking the wind out of the comedy, although the final title cards bring things back to a more lighthearted place. It leaves things on a puzzling, unresolved note, which is strangely fitting for this odd little movie.
Posted by Josh at Sunday, October 14, 2012