It's a day late, because with CineVegas going on, something had to give, and this ended up being it.

An Inconvenient Truth (documentary, dir. Davis Guggenheim)
I haven't seen this movie, and I don't plan to, and here's why: I am sick to death of the sanctimonious hype about this being a movie that will "change your life" and that everyone "must see." Two people I know from college have all but said that you are a bad human being if you don't see this movie. And it's not like I was super-excited to see it anyway, since most of the overwhelmingly positive reviews focus not on its merits as a movie (although they generally seem to agree that it's competently produced), but on the alleged importance of the message. First of all, the worst possible way to get me to listen to your message is to accuse me of being a bad person if I don't. And secondly, I honestly just don't care about the message anyway. I'm not saying that I don't believe global warming is real, I'm just not interested in hearing about it, or doing anything about it. If the whole planet sinks into the ocean one day, it doesn't much matter to me, and Al Gore isn't about to change my mind. If that makes me a bad person, oh well. Opened limited May 26; in Las Vegas this week 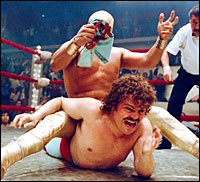 Nacho Libre (Jack Black, Ana de la Reguera, Hector Jimenez, dir. Jared Hess)
My review in Las Vegas Weekly
I saw Napoleon Dynamite when it was only just on its way to becoming a cultural phenomenon, so I feel like I was able to give it an honest appraisal without being tainted by all the hype and/or backlash. And I think that it's a pretty funny movie, albeit overrated. So I was hoping that Hess could avoid buying into his own hype and just deliver another funny movie, but he's looking more and more like a one-trick pony. This movie isn't very funny and it's certainly not distinctive in the way that Napoleon Dynamite was. It's just another dumb comedy full of fart jokes, and certain people may really like it, but it's not the stuff of lasting careers. Wide release
Posted by Josh at Saturday, June 17, 2006

i think it's really unfortunate that you dismiss this movie so easily. i haven't seen it either, but i'm willing to entertain the idea that there's something i could learn from it. but i'm really surprised that you can sit there and say that the only reason you're not going to see a movie is that some idiots didn't recommend it in the right way. it is pretty ridiculous and childish. that you follow that with such dismissive and contemptuous language further indicates that your bias against environmentalism/ists is overriding your ability to even try to appreciate this film.

the fact that you say that you don't care about global warming if it's true is also really surprising to me. i've been reading your articles and blog for a while now, and i'd gotten the impression that you were something of a libertarian. the libertarian heritage has always been staunchly pro-environment because ruining the environment is an offense against others' liberties, which is a fundamental violation of individual rights. it seems like you are being inconsistent, but then again, i don't know you.

please think about what i said and reply--i'm eager to hear your response.

See, this is why I write a blog about pop culture, not politics.

You're not necessarily wrong to categorize me as having libertarian tendencies, although I'm not serious enough about it to have any real knowledge of "libertarian heritage," as you say. And although I agree with most libertarian values, I'm not exactly passionate about them. The truth is, my political philosophy is less libertarian than it is pure selfishness. To put it bluntly: I don't care what happens to other people as long as I am doing okay. If we're killing Iraqis, or detaining people without trial, or denying gay people the right to marry, or whatever, I don't really care since I'm not an Iraqi, or a detainee, or a gay person.

To bring it back to global warming, if the ecosystem changes drastically and the next generation ends up underwater, it doesn't matter to me. I don't plan to have kids, and as long as I'm not around to deal with it, the entire human race could drown for all I care. I don't really have any interest in inconveniencing myself for the benefit of future generations.

As for the movie, I'm willing to acknowledge that I might learn something from it, and if I'd been assigned to review it or if there had even been a press screening in Vegas, I would have gone to see it and tried to judge it with an open mind. But since that didn't happen, I'm not interested in making an extra effort to see it instead of spending my time on a movie I'm actually excited about seeing. And it's not just "some idiots" that recommended it in such a shrill, judgmental way. The entire promotional campaign of the film is based on the idea that people have a moral obligation to see the movie, and that to me is indicative of the tone of the film itself. It's just not something I want to bother with, and in this case, I have a choice, so I'm exercising it.