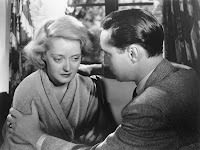 Bette Davis was nominated for and won her first Oscar for Dangerous, but she maintained that she didn't deserve it, and the general consensus is that it was really a consolation for not having been nominated the year before for Of Human Bondage. Davis is excellent in Of Human Bondage, but she's excellent here as well, even if the movie in general is less than spectacular. It's a somewhat rote melodrama with Davis as a washed-up actress (already at 27 she was adept at playing these regretful, broken women) who falls in love with an architect played by Franchot Tone. Davis' Joyce Heath is a bitter alcoholic who pushes people away because she's afraid of being hurt, and Tone's Don Bellows is a seemingly upstanding engaged man who throws away his reputation and potentially his career to be with Joyce.

Don and his fiancee Gail (Margaret Lindsay) have possibly the most businesslike break-up of all time, one of a few scenes that gives the movie the sense of tired obligation rather than sensuous excitement. But Davis gives her all as Joyce, throwing herself into the role of a capricious, often hurtful woman. She's as effective in the scenes of Joyce raging drunk as she is delivering one of the most snide and cutting monologues of her career, telling off the secret husband who refuses to divorce her. Joyce and Don seem so self-destructive that they obviously belong together, especially since Gail is utterly bland, and Joyce's husband is a stubborn stick in the mud. 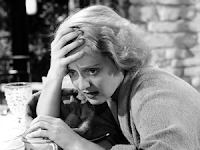 Sadly, the movie is not willing to take any chances, so the latter part of the story unfolds schematically to punish the lovers for their transgressions, and the abrupt, completely unbelievable happy ending has to put things back in line with conventional morality. Even when playing the victim, though, Davis keeps her ferocity, and she makes Joyce into a prouder and more admirable character than she might have been in the hands of a lesser actress. Dangerous on the whole may not be awards material, but it's hard to fault the Academy for singling out Davis' wonderful performance, which ranks as one of her best.
Posted by Josh at Saturday, April 24, 2010