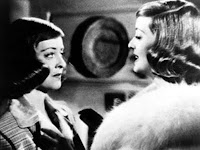 I kind of went about this backward, first seeing the second movie Bette Davis made in which she played twin sisters who love the same man (1964's Dead Ringer), and then seeing this first one much later. Dead Ringer is superior in pretty much every respect, however, even though the movies share a few key plot elements. While Dead Ringer is a cynical film noir, A Stolen Life is a melodrama typical of Davis' '30s and '40s work, an often maudlin weepie with choppy pacing and a rushed ending. It seems to be moving in several directions at once, trying to be at least three different movies over the course of its 108 minutes. Only the first of those approaches really works.

The movie starts slowly, with Davis' socialite and aspiring artist Kate meeting Bill (Glenn Ford) as he offers her a ride on his boat to the island off the Massachusetts coast where her family has a cottage. Kate falls in love with Bill, and then about 25 minutes into the movie it's revealed that the sweet Kate has a petty, jealous twin sister named Pat, who wastes no time in stealing Bill away. The romantic machinations are a little rote, but they give Davis the chance to play both the swooning naif and the heartless bitch, both of which she does reasonably well (although of course she's always better at being heartless). Then Pat marries Bill and the sisters separate, and the movie turns into some weird social drama about Kate's contentious collaboration (and brief hint at romance) with a working-class artist who's full of obnoxious self-righteousness. 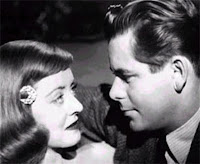 That artist, played by Dane Clark, is a grating caricature of someone's idea of avant-garde culture, and he ultimately serves no purpose in the movie's overall development. We're still forced to sit through his condescending lectures on why the blue-blood Kate isn't a real artist or a real woman, and then expected to sigh as she falls for his sexist drivel. Except he basically disappears in the final third, which belatedly gets around to the same business that was the whole plot of Dead Ringer, as Kate tries to take over Pat's life after Pat dies accidentally via drowning. This could be the plot for a whole movie (and obviously was later), but here it's used mainly as a plot device to get to the prescribed happy ending, with Kate and Bill together despite all indications that they shouldn't be. It's a sloppy resolution to a sloppy movie, with a fairly tame performance from Davis and some very dodgy effects to get the two sisters in the same frame. It's obvious that Davis' second time around playing twins worked out much better.
Posted by Josh at Tuesday, April 27, 2010