A few years ago, when I first got interested in seeking out Bette Davis movies, I rented 1962's What Ever Happened to Baby Jane?, which I think was probably the one Davis movie besides All About Eve that I could name off the top of my head. As I said back then, it was probably not the best starting point, and despite its reputation it's really not a very good movie. But it was enormously successful at the time and a bit of a comeback vehicle for both Davis and Joan Crawford, so the two stars plus director Robert Aldrich and screenwriters Henry Farrell and Lukas Heller were all set to reunite two years later for Hush...Hush, Sweet Charlotte, another lurid thriller about aging female relatives harboring seething resentment for each other.

Except Crawford so hated working with Davis that she dropped out of the movie after four days and was replaced by Olivia de Havilland, which I think may be the single deciding factor that makes Sweet Charlotte a better movie than Baby Jane. Davis and Crawford work so hard to out-act each other in Baby Jane that it's a wonder there's any scenery left by the end, and it gets so exhausting over the course of the film that you lose any sort of emotional investment. In Sweet Charlotte, Davis does nearly as much overacting as she did in Baby Jane (and the Oscar-nominated Agnes Moorehead is even hammier), but she's balanced out well by de Havilland, who shows such restraint that the twists in her character's story actually turn out to be sort of surprising. Even as the stakes rise toward the finale, de Havilland stays remarkably grounded, and that gives her brief outbursts greater impact. 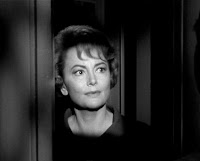 To be fair, Davis is playing an unhinged recluse whom everyone believes hacked up her married lover more than 30 years ago, so she has a certain license to overdo it. And amid all the screaming and eye-bulging she does get some moments of real pathos in there. The opening credits play over a long take of Davis against inky black shadows, conveying all the years of Charlotte's despair with just her eyes. It's pretty impressive, but it doesn't sustain, and de Havilland definitely comes out ahead by the end.

There are other welcome old faces here, including Joseph Cotten and Mary Astor in her final performance. Aldrich seems determined to give all of them every opportunity to act their heads off, and they mostly do (Astor is nicely restrained, though). He plays up the overwrought horror of the story with lots of low-angle shots and shrill music cues. It's almost as silly as Baby Jane, but that unplanned contrast in the performances (Crawford no doubt would have overacted like mad) makes it much more effective.
Posted by Josh at Saturday, April 03, 2010