Bette Davis was nominated for her seventh Oscar for Mr. Skeffington, and it's definitely the kind of role we think of as Oscar bait nowadays: She plays the same character over a span of nearly 30 years, going from frivolous 20-something to world-weary 50-year-old, in a period that covers a whirlwind of huge historical events (World War I, the Depression, World War II). And she dives in with vigor as would be expected, playing up her coquettishness as a younger woman and then gradually aging into bitter decrepitude, all with complete believability. It's strange to see this movie after watching so many late-period Davis movies, because in the final third she's basically made up to look like the version of herself that would become so common in movies 20 years later (she was 36 at the time). The make-up is less than convincing in close-up, but the effect is still striking in hindsight.

The movie itself is less effective, with a labored message and a bloated running time. It starts out lively enough, with Davis as the flighty socialite fending off suitors left and right, keeping up the illusion of money when in reality she's flat broke. Then she marries Claude Rains' stalwart banker and becomes Mrs. Skeffington (he's the title character), all for the sake of keeping her standard of living and bailing out her no-good brother. That's when we start skipping through the years, as Davis' Fanny continues to entertain suitors while leaving her husband at home, bears a daughter for whom she feels no affection, and becomes increasingly vain, caught up in the idea of her beauty lasting forever. 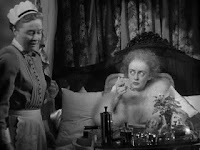 Since this is a 1940s Hollywood melodrama, Fanny of course gets her comeuppance, as her beauty goes all at once thanks to a battle with diptheria, and she finds herself alone and unloved. At that point in the movie, Davis goes full-on Oscar bait, and that combined with the make-up and the bludgeoning score just becomes too much. What had previously balanced histrionics with a surprising amount of humor and a range of interesting characters becomes a one-woman clip reel, and as much as I love Bette Davis, I found it pretty tiresome. The tragedy just becomes so thick that the movie paradoxically seems less serious, because it's no longer playing fair. Cut things off at 100 minutes or so, leave Fanny's fate to chance, and you have an entertaining and well-crafted drama. Let the movie play out to the end, though, and you have an ordeal.
Posted by Josh at Wednesday, April 21, 2010