Warning: Spoilers for both versions of The Mechanic.

The new Jason Statham-led remake of The Mechanic, a mostly forgotten 1972 thriller starring Charles Bronson, is itself mostly forgettable, just another in a long line of Statham action movies in which he shoots and punches people and looks pretty badass doing it. I like Statham as an action star, and I think that when given the right material (in movies like Crank or The Bank Job), he can really deliver. He's physically impressive but also a pretty decent actor, and he can add a bit of sly humor to a scene when it's called for. (Statham definitely beats out Bronson, who pretty much always sounds like that old Simpsons parody where he threatens to "fix Emmett.") Statham does what he can in The Mechanic, but it's a B-movie throwaway with nothing creative to add.

Taken on its own, neither version of The Mechanic is anything special, but it's interesting to compare the way B-movies then and now went about thrilling their audiences. In the original, directed by Michael Winner (who also directed Bronson in three Death Wish movies), the kind of jazzy experimentalism of mainstream 1970s American cinema seeps through in the wordless opening sequence (15 minutes before there's any dialogue) and the amoral, almost nihilistic tone. In broad strokes, the movies have the same plot: Veteran hitman Arthur Bishop (Bronson/Statham) is ordered to take out his longtime friend and mentor (Keenan Wynn/Donald Sutherland), which he does with little hesitation. He then finds himself taking on his mentor's son, Steve (Jan-Michael Vincent/Ben Foster), as a protege while the son has no idea that Arthur killed his father.

In the original, both Arthur and Steve are completely cold-blooded killers; we never get the sense that Arthur cares (or even knows) why he's killing the people he has to kill, and he shows virtually no remorse over having to off his old friend. Steve, too, seems to relish the joy of killing once Arthur takes him under his wing, and is completely indifferent to the fact that his father was murdered. In both versions of the film, Steve eventually tries to kill Arthur -- in the original, it's because Steve has become an effective hitman on his own, and Arthur's employers hire him to take Arthur out. Just as Arthur killed his own mentor without a second thought, so too does Steve blithely kill Arthur. It's only as Arthur is in his death throes that he admits to the murder of Steve's father, to which Steve responds with a smirk and a shrug: "Oh, you killed him?"

In the new version, Steve is tortured by his dad's death and driven to revenge -- part of the reason Arthur takes Steve in is to prevent him from doing something foolish in pursuit of ill-advised vengeance. When Steve discovers that it was Arthur who killed his father, he can't hold back, and he rigs an explosion to kill Arthur. Of course, a modern action movie can't end with the death of the hero, so while Bronson's Arthur dies writhing on a hotel-room floor after being poisoned, Statham's Arthur stealthily rolls away from his truck instants before it explodes, escaping to ride away into the sunset at the end of the movie. Steve isn't so lucky: In both versions, he succumbs to a car bomb planted by Arthur before Steve turned on him, clearly meant as betrayal insurance. But the effect is different: In the original, both amoral, hedonistic men finally pay the price for their arrogance, while in the new version the hero defeats the villain and lives to fight another day.

And that's the main thing: In 1972, Bronson could play a basically heartless killer as the main character of a cheap thriller and never have to deal with crises of conscience or moral equivocation. He was an assassin and he killed people -- end of story. But in 2011, Statham can't do the same thing. His Arthur has to kill only bad people (arms dealers, drug kingpins), and when he betrays his mentor, it has to be because he was being deceived, and he ultimately has to seek vengeance on behalf of the wronged party. The new film concocts a conspiracy and a villain, one that Arthur and Steve can unite in defeating because they both want to enact justice for Steve's father. In Winner's film, there's no justice except perhaps for the karmic justice that leaves both main characters dead at the end. In Simon West's take, the bad guys get punished and the good guys walk away. Moral complexity is gunned down, beaten senseless and blown to bits.
Posted by Josh at Thursday, January 27, 2011 No comments:

I did a short interview with actor and comedian Baron Vaughn, a Las Vegas local who's starring on the new USA drama Fairly Legal, and the show is a good fit for his breezy, goofy style. It's even more lightweight than the typical USA series, if that's possible, with main character Kate Reed (Sarah Shahi) taking on mostly low-stakes cases as a legal mediator (she used to be a lawyer but left the profession after becoming disillusioned). It follows the standard USA model of self-contained stories with a light dusting of serialized elements, although any ongoing plots on this show are even more inconsequential than usual.

Over time I've given up on most of the USA shows I've been following just because they quickly become repetitive, and the only one I do still watch (Royal Pains) keeps me coming back because of the character dynamics, not the procedural stories. Fairly Legal has some mildly amusing characters (including Vaughn's Leonardo Prince), but they're not really compelling enough to carry the show, nor do they get enough time to develop beyond a few brief details (Kate's angst gets a decent amount of screentime, but it's a little overdone). Legal will fit in well with USA's brand without coming close to transcending it, and that brand has become increasingly formulaic.

It sounds like the set-up to a joke: A vampire, a werewolf and a ghost move into a house together. But Being Human treats this idea with total seriousness, with the result being a supernatural drama that's a little too heavy on the angst. I've never seen the British series that this new American version is based on, so I can't say how faithful it is or how well it captures the feel of the original. But on its own it's a mildly interesting show that will probably stand or fall on how well it moves beyond the typical supernatural cliches. Right now I'm not really intrigued by the latest iteration of a secret vampire cabal or a bloodsucker trying to reform; the vampire stuff on this show often feels like a de-sexed version of True Blood.

The other two main characters have a little more potential; werewolf Josh (Sam Huntington) is endearingly neurotic, and ghost Sally (Meaghan Rath) has a sweet vulnerability and nice spunk. Still, there are so many supernatural-themed movies and TV shows out there that it's really hard to figure out a new direction for this material, and so far (I've seen the first three episodes), Being Human hasn't done it. The mythology is either rote or left unmentioned (there's barely an effort to explain why vampire Aidan is able to walk around during the day), and instead the focus is on the characters' struggles with their monstrous nature. In Aidan's case, it's a bunch of vampire cliches, although Josh has a little more complexity to his neuroses (he does get to be human for all but one night each month), and Sally's melancholy is more identifiable. There isn't enough yet to set this show apart from other supernatural-themed series, but there is enough that I'll probably watch it a few more times to see where things go. 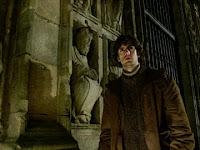 Earlier, things get off to a slow start, and once director and co-writer Xavier Villaverde answers the question of whether Jacobo is really possessed or suffering from mental illness, the excitement of the mystery quickly fades. The movie opens with a wonderfully disturbing sequence of young Jacobo running and hiding in his father's cavernous art studio, full of hideous sculptures that seem to stare at him. At the end of the movie, we see this sequence again with all the events laid out as they happened, and the feeling of dread and evil is completely gone. Retitling 13 Curses may have been a misleading move, but a movie that actually lived up to that title would probably have been more interesting.
Posted by Josh at Thursday, January 13, 2011 No comments: