Nothing about Olympus Has Fallen called out for a sequel, and I'd be surprised if anyone involved in its production expected there to be a follow-up. But the movie was successful enough that three years later Gerard Butler returned as Secret Service superhero Mike Banning, once again forced to protect U.S. President Benjamin Asher (Aaron Eckhart) by murdering as many terrorists as possible. London Has Fallen is even more hyper-violent than its predecessor, with more grossly xenophobic pandering, and Mike comes across less as a freakishly competent agent than as a psychopath who gets off on killing.

While the action in Olympus was pretty much confined the under-siege White House, London takes place across the city of London, as well as above it, allowing director Babak Najafi to stage more elaborate action sequences, although the shoddy effects (even shakier than in the last movie) hold him back from doing anything particularly impressive. There are car chases and helicopter crashes and lots of explosions, but none of it carries any weight. Late in the movie, there's a stitched-together single-take shot of Mike infiltrating a terrorist stronghold, and it looks just like gameplay footage from a video game, with Mike as the deliberately blank protagonist. That's representative of the movie as a whole, which has a sort of plug-and-play feel with characters thrown into a generic action-movie template.

That template involves some anonymous Middle Eastern terrorists staging an attack on world leaders who are in London for the funeral of the British Prime Minister. Olympus sacrificed the leader of South Korea as a plot catalyst; here the filmmakers raise the stakes by killing at least five heads of state within a few minutes. Of course Asher manages to escape thanks to Mike's projected invulnerability and unerring aim (he shoots multiple bad guys in the head before even getting Asher into their getaway car), and then the terrorists are focused solely on tracking him down so they can complete their revenge for an American drone strike on the head terrorist's family.

Although Creighton Rothenberger and Katrin Benedikt return as the screenwriters (with additional writing from several others), London is more focused on snarky dialogue and mean-spirited jabs than Olympus was. People most remember the infamous "Go back to Fuckheadistan" line, but Mike spends the whole movie throwing out racist and dehumanizing insults that make him sound like he places no value on human life. It's a strange approach to a character who's meant to be a hero, someone with a stronger moral code than the bad guys. But Mike's really just the American flip side of the equally vengeance-driven Middle Eastern terrorists. It turns what should be a fun action movie into an angry rant about foreign policy, making it hard to enjoy even on the level of mindless trash.
Posted by Josh at Thursday, August 22, 2019 No comments:

When Olympus Has Fallen was released in 2013, most of the media attention was focused on it as the first of two very similar movies about terrorists attacking the White House, released just months apart. Yet somehow, while both Olympus and Roland Emmerich's White House Down (released three months later) were idiotic, loud, overblown action movies with nonsensical plotting and terrible dialogue, Olympus became a huge surprise hit, spawning an unlikely franchise for grim, single-minded Secret Service agent Mike Banning (Gerard Butler).

As a character, Mike is completely uninteresting, with barely any personality or back story in this movie, even with an opening prologue that provides him with motivation to seek redemption. As a conduit for violence, he's brutally efficient, plowing his way through dozens of faceless henchmen in his single-minded mission to rescue captive U.S. President Benjamin Asher (Aaron Eckhart). The movie opens with a car accident in a snowstorm as Asher and his family are on their way to a Christmas party, and Mike is following behind. Mike saves Asher from a car that's skidded off the road and is dangling from a bridge, but Asher's wife (Ashley Judd) plummets to her death, and Mike is tortured by his inability to save them both.

A year and a half later, Mike has been relegated to a desk job at the Treasury Department, but of course he manages to infiltrate the White House when it's taken over by a Korean terrorist organization. Mike is so absurdly competent that literally every other character, aside from Asher and his aides, is disposable cannon fodder. Either they're easily dispatched minions of terrorist mastermind Kang Yeonsak (Rick Yune), or they're fellow U.S. operatives who lack Mike's skills and apparent invulnerability (he makes it through the entire movie without so much as a humanizing flesh wound). Mike single-handedly takes down the bad guys, to the point where he's giving Speaker of the House (and acting president) Allan Trumbull (Morgan Freeman) orders, as the country's top military officials sit dumbfounded in a control room.

Butler is one of Hollywood's most inexplicably successful actors, and his performance here is just as flat and one-dimensional as usual, complete with his typically terrible American accent. Poor Radha Mitchell is stuck in the suffering-spouse role as Mike's nurse wife in a handful of scenes, but Mike never comes off like a real person. The easy shorthand for this movie is "Die Hard in the White House," but John McClane had a genuine emotional life that made his heroism more meaningful (at least in the first movie). The filmmakers here (including director Antoine Fuqua in one of his worst efforts) are interested only in excessive violence and over-the-top patriotism, from the slow-motion unfurling of the American flag to Melissa Leo's secretary of defense literally reciting the Pledge of Allegiance as the bad guys drag her away. It's crass, disingenuous pandering that turned out be disgustingly effective.
Posted by Josh at Wednesday, August 21, 2019 No comments:

It's pretty amazing how much air travel has changed in the last 80-plus years, as is plain to see in the otherwise forgettable 1936 B-movie 13 Hours by Air. Directed by journeyman Mitchell Leisen and starring affable but bland Fred MacMurray as pilot Jack Gordon, 13 Hours strolls leisurely through its brief 74-minute running time, only generating mild suspense toward the end. The title refers to the time it takes for a United Airlines flight to get from New York to San Francisco, making numerous stops along the way. Jack is first a passenger before taking over as pilot on the second half of the journey, but his fellow passengers mostly remain the same, including socialite Felice Rollins (Joan Bennett), with whom he shares a low-key flirtation. 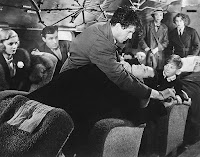 MacMurray and Bennett have some appealing chemistry, but their romance, like everything in this sedate movie, is pretty underwhelming. There are only a handful of passengers on the flight, including an annoying spoiled brat named Waldemar (Bennie Bartlett) and his exasperated nanny (Zasu Pitts); a pair of suspicious men (Brian Donlevy and Alan Baxter) who turn out to be a bank robber and the FBI agent tracking him; and a haughty aristocrat (Fred Keating) trying to stop Felice from getting to San Francisco for reasons that are not very interesting once they're revealed. There's only slight intrigue in seeing these various plot threads develop, and the movie mostly proceeds at the same unhurried pace as its titular flight. 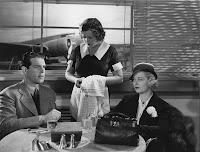 Eventually, there's a bit of danger, as the plane is forced into an emergency landing by inclement weather, and the bank robber decides to finally reveal himself and threaten his fellow passengers. Even with all the gunplay (of course in 1936, anyone could bring a gun on board an airplane without any interference), nobody seems like they're in much danger, and loudmouthed Waldemar ends up saving the day somehow. Even dedicated MacMurray or Bennett fans could easily skip this one, as both actors coast through the undemanding roles. The best reason to see the movie is really to witness the early incarnation of commercial air travel, when passengers could just wander into the cockpit or open the outside door mid-flight. That stuff is far more attention-grabbing than anything in the sleepy plot.
Posted by Josh at Tuesday, August 13, 2019 No comments: