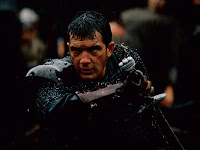 In junior high, I was a huge Michael Crichton fan; Jurassic Park was one of the first "adult" novels I ever read, when I was in fifth grade, and I eagerly devoured Crichton's books alongside my other middle-school favorites, Stephen King, Clive Barker and Anne Rice. Crichton's short 1976 novel Eaters of the Dead was sort of an outlier, a historical thriller dressed up to seem like nonfiction, with an academic narrative style that often undermined the story's potential excitement. By 1999, when the notoriously troubled film adaptation of Eaters of the Dead (retitled The 13th Warrior) was released, my Crichton fandom had largely subsided, and I never had any interest in seeing what turned out to be a poorly reviewed box-office failure. 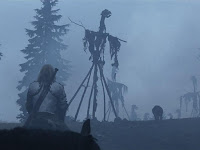 It'd be nice to say that the movie turned out to be underrated, but the best I can say for it is that it doesn't come across as quite the disaster that one might expect from a movie that underwent extensive reshoots, helmed by a different director, after bombing at test screenings. I don't remember the plot details of the novel (which I probably read close to 25 years ago), but the movie hangs together well enough as a story, even if the narrative doesn't really go anywhere. Absent Crichton's meticulous (fake) historical references, Warrior is just a mediocre action movie with dubious period accuracy, cribbing a bit from Beowulf (although honestly I didn't realize that until reading up on it later) and a bit from the real life of 10th-century Arab explorer Ahmad ibn Fahdlan (played, of course, by the Spanish Antonio Banderas). 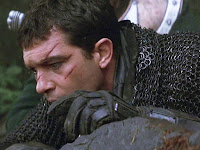 While on a diplomatic mission, Ahmad encounters a group of Vikings who enlist him to join their band of warriors (as prophesied, the 13th member must be a foreigner) and travel north to a village ravaged by mysterious cannibalistic assailants. Apparently these savages are meant to represent the monster Grendel from Beowulf, but the entire story builds to the revelation that they are not supernatural creatures, merely primitive humans (in the novel, they are specifically identified as remnants of Neanderthals), making it hard to know how to interpret their depiction (which seems vaguely racist at times, although against what real-life ethnic group is never clear).

The movie spends a lot of time building up Ahmad's rapport with his Viking compatriots, including an absurd montage in which he learns their entire language in what appears to be a few days, so that the characters can all talk to each other in English onscreen. That kind of clumsy storytelling might be indicative of where things went wrong, although it's generally hard to tell which parts of the movie were created by original director John McTiernan, and which were later added by Crichton himself, who was the uncredited director of the reshoots. Either way, the early part of the movie is a bit of a slog, but once the savages start attacking the village, things perk up a bit, and McTiernan (I'm assuming) stages a great nighttime battle sequence lit only by torches as the Vikings struggle to fight off what they believe may be actual demons.

Things go downhill from there, and the attack by the Vikings on the savages' lair (meant to most directly evoke Beowulf) is confusing and anticlimactic, as is the rushed finale (which Crichton shot to replace McTiernan's poorly received original ending). The Vikings themselves never really develop into distinctive characters, and while Banderas gives Ahmad some moments of quiet strength, he remains mostly inscrutable as well (his fling with a Viking woman barely makes an impression). Diane Venora gets second billing but virtually no screen time as the queen of the besieged village, another sign of what may have been left on the cutting-room floor. A handful of online posts clamor for a release of the original director's cut, but the movie doesn't give the impression that there's brilliance to be salvaged somewhere within.
Posted by Josh at Sunday, March 13, 2016 No comments:

For all its pretense at getting to what's "real," The Real O'Neals is as tacky and glib as any sitcom on the air, treating the supposedly serious issues of its characters with a dismissive shrug. There's no sense of the real difficulties facing the formerly upstanding Catholic O'Neal family as they deal with various hidden problems, all of which bubble to the surface in the overwrought pilot episode. Parents Eileen (Martha Plimpton) and Pat (Jay R. Ferguson, a long way from Mad Men) are getting divorced, football-playing older son Jimmy (Matthew Shively) is anorexic, daughter Shannon (Bebe Wood) is a kleptomaniac, and younger son Kenny (Noah Galvin), who also narrates the show, is gay.

Kenny's coming-out motivates the explosion of family secrets, but his newly expressed sexuality and his mother's negative response to it are depicted with the same breeziness, just wacky quirks among this deeply repressed family. Advice columnist and outspoken LGBT activist Dan Savage is one of the producers (and a loose inspiration for the main character), but none of his passionate advocacy comes across in the way the show portrays Kenny. Kenny's siblings' problems are given even less weight, to the point at which it's hard to understand what place they even have in the show's concept. It would be one thing if this was a challenging show mining dark humor from uncomfortable situations, but it's just as corny and contrived as the average family comedy. The actual jokes, with wacky mishaps and tiresome fantasy sequences (check out the ABC cross-promotion with the extensive Jimmy Kimmel guest spot in the second episode!), don't live up to the potential complexity of the concept.

As she proved on Raising Hope, Plimpton is great at playing an exasperated matriarch, and Ferguson, whose work on Mad Men was underrated, has a few solid moments as the clueless dad. The kids are less impressive, especially Galvin, whose voiceover narration should tie the show together. His observations are neither funny nor insightful, over-explaining the central concept (that the seemingly perfect family is not actually perfect) in a way that only highlights the disconnect between what the show is aiming for and what it actually accomplishes.