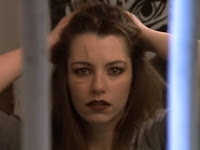 Presented by Troma, Hellblock 13 is the kind of micro-budget exploitation movie that filled video-store shelves in the '90s, with an audience primarily composed of teenage boys eager for any movie featuring boobs and/or gore. Hellblock has a bit of both, although perhaps not as much as one might expect from a movie with this pedigree. It's a sort of low-rent take on Creepshow, an anthology of three EC-style horror stories, with a framing sequence that offers its own horrific twists. B-movie favorites Gunnar Hansen and Debbie Rochon star in the framing sequence, with Rochon as a serial killer about to be executed and Hansen as her executioner. Rochon's Tara has been keeping a notebook full of scary stories that are relayed to her by the ghosts in the prison (or something), and she convinces the nameless executioner to let her read him some of them. 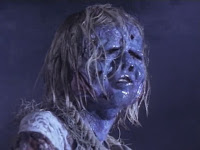 So the three other segments are meant to be Tara's stories, although they don't really connect to her vaguely witchcrafty practices or to each other. Nor do they make much sense, really. The first one involves a woman whose two kids have gone missing, and it's never clear whether the woman actually killed her kids and is being pursued by their vengeful ghosts (since she's tormented and killed by a ridiculous-looking drowned-kid ghoul), or someone else killed the kids and set their ghosts on her, or it's something else entirely. The waterlogged kids are kind of hilariously clumsy-looking, and the woman's completely bored response to everything that happens to her (being accused of murder, being attacked by ghosts, being proposed to by her boyfriend) seems like more a product of bad acting than a deliberate storytelling choice.

The second segment is similarly baffling and similarly grotesque, with an abused trailer-trash housewife attempting revenge on her husband, only for the spell she procures from a local witch to backfire (it's not quite clear how) and turn him into a hulking monster (featuring more terrible prosthetics). This story just kind of peters out, with the only possible lesson being that it's a bad idea to attempt to escape an abusive relationship. The third story is the most coherent, with a biker gang initiating its newest member via a secret ritual honoring the spirit of a dead biker mama. The new member is an undercover cop, and he gets his comeuppance at the hands of the vengeful biker-mama spirit. It's simple and straightforward, and it gives the movie the opportunity for some gratuitous biker-chick toplessness and lesbianism.

The framing story wraps up with Tara getting her revenge on her captors by killing herself before they can kill her, then returning as a ghost (or something) and executing her executioner. Before killing herself, she writes "Publish Me" in blood on her cell walls, so the whole thing is apparently an elaborate ploy to get a book deal. That kind of haphazard silliness pervades the movie, which isn't really campy enough to be funny but certainly isn't actually scary or creepy, either. Rochon's exuberantly evil performance is the movie's highlight, but even that is only good for a handful of entertaining moments. 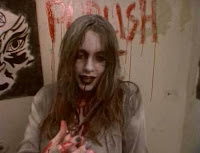 Director and co-writer Paul Talbot made three of these straight-to-video horror anthologies in the '90s and then apparently got out of the movie business, and it's hard to see anything particularly promising in his flat, functional style (it doesn't help that the version I watched on Amazon looked like it was transferred directly from VHS). B-movie aficionados (especially fans of Rochon or Hansen, who played Leatherface in the original Texas Chain Saw Massacre) could find a bit of enjoyment in this movie, but even they might struggle to make it to the end.
Posted by Josh at Wednesday, April 13, 2016 No comments:

Syfy has made a significant effort recently to rebuild its reputation as a place for intelligent science fiction, with series like The Expanse and The Magicians, and at first glance, Hunters seems like it could be part of that same trend. Based on the novel Alien Hunter by renowned genre writer (and alleged alien abductee) Whitley Strieber, Hunters is sort of like 24 meets Invasion of the Body Snatchers, with an elite government agency battling against alien terrorists hidden among the human populace. It's a silly, pulpy premise that could have been campy fun, but creator Natalie Chaidez (a writer and producer on Syfy's 12 Monkeys) plays it with deadly seriousness. The tone is so grim and gritty that it's laughable, especially with the weak acting, chintzy special effects and overall blatant cost-cutting.

Shot in Australia (presumably to save money) but set in the U.S., Hunters features a cast of mostly Australian actors doing questionable American accents, and sticks to generic-looking locations that lack geographic specificity (although theoretically the show takes place in the Washington, D.C. area). Everything about the show is just slightly off, in a low-budget knockoff kind of way. The characters work in an underpopulated warehouse-style office, for an agency with the absurd name of the Exo-Terrorism Unit (or ETU, strikingly similar to 24's CTU). The frequent shots of alien guts are excessively gross but also extremely fake-looking. The aliens' main form of communication is a kind of chattering that is meant to sound creepy but quickly becomes annoying, especially because it crops up in every attempt at a suspenseful moment, and also before and after every commercial break. It's like the producers were determined to build the entire series around one particularly cool piece of sound design that they commissioned.

Star Nathan Phillips plays the standard macho, tortured agent who crosses the line but gets results, who has a personal grudge against the alien terrorists who kidnapped his wife. Britne Oldford is slightly better as the ETU agent who is actually an alien herself, although she grew up believing herself human and doesn't know where the aliens come from or what they're meant to do. The main distinguishing mark on the aliens is a rash that looks like extremely dry skin, which leads to a hilarious scene in the second episode in which the anguished hero is devastated to discover his missing wife's cabinet full of moisturizer. Playing this scene as an emotional bombshell is indicative of how seriously the producers take this nonsense, and no one in the cast (even TV veteran Julian McMahon, playing the main super-evil alien terrorist) is equipped to pull it off. Hunters desperately wants to be a serious allegory for modern terrorism and an intense action thriller, but it fails at both, and in doing so loses the opportunity to at least come up with some enjoyable B-movie cheese.