In 1956, Storm Center was probably a bold political statement, coming out against the censorship of Communist literature and strongly criticizing witch hunts based on perceived Communist affiliation. It's an admirable stance for a movie to take in the midst of a period of great paranoia and political pressure, but viewed in hindsight more than 50 years later, it just comes off as preachy, simplistic and didactic.

It doesn't help that Bette Davis basically plays a flawless martyr, not exactly her strong suit. She stars as small-town librarian Mrs. Hull, who's beloved by seemingly everyone in the town, kind and helpful to children and dedicated to her job of promoting literature and learning. When the town council, led by an ambitious young member played by Brian Keith, insists that Mrs. Hull remove a pro-Communist book from the library shelves, she refuses on principle, and thus begins a campaign to not only fire but also discredit her, such that nearly the entire town eventually turns against this nice old lady.

The nice old lady who loves books versus the cynical political climber is a pretty lopsided contest, and it's not like director and co-writer Daniel Taradash makes much of an effort to give Keith's character any nuances or depth. Mrs. Hull, too, is pretty one-dimensional, although Davis mines a bit of pathos out of her despair as the whole town (including the little boy who used to idolize her) shuns her for being a supposed Commie. Taradash goes overboard in making his point, though, having that little boy, played by the supremely annoying Kevin Coughlin, turn into a sullen delinquent when he learns that his favorite librarian is a traitor to America, and resorting to setting the library on fire before the town comes around to re-embracing Mrs. Hull.

Storm Center likely provided a valuable service at the time, offering up a comparatively measured (aside from the library burning down) counterpoint to anti-Communist hysteria. But its careful didacticism is what makes it such a chore to watch today, and even Davis' occasional moments of fierce determination can't overcome the stodgy moralizing.
Posted by Josh at Monday, July 30, 2012 No comments:

Completely undermining the claims of Friday the 13th: The Final Chapter, Friday the 13th: A New Beginning, the fifth movie in the repetitive horror series, opened less than a year after its predecessor, promising, well, a new beginning for the aging franchise. It's the first sequel in the series not to open with an explicit recap of previous installments, and the first Friday the 13th not to take place at Crystal Lake. It opens instead with a dream sequence featuring The Final Chapter's Tommy Jarvis (Corey Feldman), who imagines Jason rising up from his grave to kill again.

That, of course, is exactly what the audience expects as well, but director and co-writer Danny Steinmann confounds expectations by moving away from Jason and Crystal Lake and cutting ahead several years to the now-teenage Tommy (John Shepherd) on his way to a mental institution. Like many horror-movie protagonists before and after him (including Laurie Strode and Kirsty Cotton), Tommy has been so traumatized by his experience with a psychotic killer that he requires constant care and supervision. And although Tommy seems like he's going to be the main character of the movie, he actually barely speaks and disappears for long stretches in favor of the same standard group of horny delinquents as in every other installment.

The facility where Tommy is sent is sort of a progressive home for wayward teens, which provides plenty of fodder both for the requisite gratuitous nudity and for Jason to hack and slash his way through. But wait, is that really Jason doing the killing? Spoiler for 27-year-old movie: No, it's not, and the movie is set up like a murder mystery, with Steinmann providing several suspects for the faux Jason running around in a hockey mask and wielding a machete. As always, the characters are less than one-dimensional and essentially interchangeable, and the revelation of the killer's true identity is seriously anticlimactic since we've previously seen the character utter maybe two lines in two scenes. 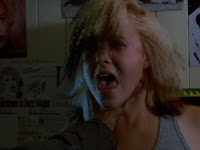 The one interesting thing A New Beginning has going for it is Tommy's trauma, but given how little screen time he actually has, Shepherd doesn't have much to do except look sullen and/or tortured. The scarred final girl (or guy) from a slasher movie has become as much of a cliche as the slasher itself, and Steinmann fails to explore the concept in any kind of compelling way (for one of the most interesting looks at slasher PTSD, check out Rob Zombie's underrated Halloween II). The movie ends (spoiler again) with Tommy completely cracking and becoming the killer we've suspected him to be all along, but audiences were so insistent on Jason's return that the whole idea was abandoned in the next movie anyway.
Posted by Josh at Friday, July 13, 2012 No comments:

Producer Terence Wrong has made a career out of creating serious but accessible documentary series about urban hospitals and other big-city institutions. NY Med is his third hospital series for ABC, after Boston Med and Hopkins, and it doesn't mess with the formula, presenting a straightforward look at the practice of medicine in two different New York City hospitals, with minimal flash and no narration. Most of this material is inherently fascinating, and Wrong and his crew need only stand back and document the life-saving surgeries and emergency treatments the doctors perform.

But this is network TV, so NY Med isn't without its manipulative sentiment. There are plenty of sappy music cues and heartstring-tugging interviews with family members, and Wrong is good at drumming up suspense by cutting from, say, a potentially unsuitable liver being prepped for transplant to something like a drunk moron stumbling into the ER. Those smaller segments do a nice job of breaking up the heavy life-or-death stories, but it's sometimes frustrating to be watching doctors nervously anticipating a test result to find out if a tumor is cancerous and then have to wait through a superfluous segment about some nurse's dating life before finding out the answer.

Wrong does go astray with those segments that leave the hospitals to follow a young doctor as he returns to his old haunts in New Orleans (cue the theme song from Treme!) or a hottie nurse as she vacations in Miami with her meathead boyfriend. Those concessions to reality-TV conventions feel like cheap sell-out moments, as does the inclusion of the self-aggrandizing talk-show host Dr. Oz, who may still practice medicine but mostly offers up lame platitudes about how love is the most important element in recovering from heart surgery. Luckily, Wrong has plenty of other doctors and patients to focus on, and no single personality dominates the show. For fans of medical dramas who'd like to see how this stuff works in the real world (with the added element of things not always working out as scripted), NY Med is as close as you're going to get.

TNT's new procedural Perception belongs to the subgenre we might call "douchebag solves crimes," along with shows like Monk, Psych and The Mentalist. The main character is an insufferable, arrogant asshole who nearly single-handedly solves complex cases, no thanks to the incompetent rule-followers around him. His insensitivity and rudeness are excused not only by his crime-solving genius, but often also by some tragic personal flaw (mental disorder, murdered family member, etc.). It's an archetype going back to Sherlock Holmes, and it's not an inherently bad set-up for storytelling, although it's become awfully prevalent in TV crime procedurals.

The problem with this device in Perception is that it's executed so poorly, and the main character is so grating that he engenders no sympathy whatsoever. Eric McCormack plays neuroscience professor Daniel Pierce with a perpetual smirk and condescending air, and even his moments of vulnerability and compassion come off as arrogant. Not only is Daniel a brilliant academic/detective, but he also suffers from paranoid schizophrenia, which in the show's skewed world just makes him better at solving crimes (and more of an inconsiderate jerk). Sure, he hallucinates people who aren't there, but those people help him solve crimes!

The first episode features a schizophrenia-related twist that's probably meant to be mind-blowing but is just lazy and obvious, and the way that Daniel's delusions contribute to his crime-solving stretches believability the first time, let alone the third or fourth. The cases themselves are nothing special, and the show has to bend over backward to include some sort of neuroscience-related element in each one. As the FBI agent partnered with Daniel (and one of his former students), Rachael Leigh Cook is completely miscast; she comes off like a teenage girl playing dress-up. The whole enterprise is slapdash and annoying, scraping the bottom of the barrel of mental disorders and specialized expertise that could theoretically aid in solving crimes. If TV has to be filled with endless recycled crime procedurals, couldn't we at least lose the desperate gimmickry?