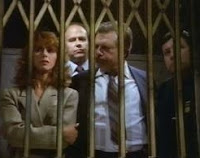 It's not actually a pilot for a TV series, but the 1990 made-for-USA movie Nightmare on the 13th Floor could very well have been the extended first episode of a forgettable procedural about a travel writer who solves crimes on her various trips. Michele Greene is actually pretty charming as Elaine Kalisher, who's assigned to write an article about the historic Wessex Hotel in Los Angeles and ends up stumbling on a Satanic murder cult. The plot is totally idiotic and takes way too long to get to its predictable reveals (even though the movie only runs 85 minutes), but there's a kind of comforting familiarity to the tone and style, which matches the kind of reruns USA was probably airing before and after showing this movie. 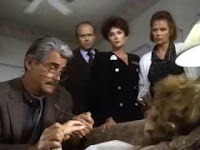 The opening even features Elaine at home in Florida before her trip, bantering with her sassy kid neighbor, as if establishing a supporting cast for a series that will never come. Once in LA, she checks in to the fancy Wessex, but while exploring the hotel for her article, she gets stuck between floors in the service elevator, accidentally witnessing the murder of a man on the hidden 13th floor. All the employees insist that there is no 13th floor and that she must have been hallucinating (after taking a bump on the head when the elevator jolted to a stop), and a seemingly kind local doctor (played by James Brolin) assures her that it's all in her imagination.

Of course, all these people are part of the conspiracy, and there's a nice touch as Elaine describes the old-timey 13th floor and its gaslights while being told that her own observations aren't to be trusted. Writers J.D. Feigelson and Dan DiStefano don't really do anything else with the idea of a woman's trauma being minimized and disbelieved, but it's still a smart reference for a movie that's mostly just interested in grinding through plot mechanics. Elaine is actually very determined and resourceful and never really doubts herself, pushing forward until she discovers the (obvious) sinister truth. 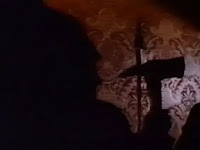 There's not a lot of suspense in that discovery, and since this movie was made for basic cable in the '90s, almost all of the violence takes place offscreen, with virtually no blood. Director Walter Grauman tries to lend some style to that necessary constraint, showing the shadow of the killer's axe descending on each victim right before a scream and a cut to the next scene, but it's more cheesy than evocative. That applies to the movie as a whole, which might have been a little bold for USA in 1990, but now just seems clunky and quaint.
Posted by Josh at Wednesday, February 13, 2019 No comments: