Also known by the more accurate title City in Panic, the 1986 Canadian exploitation movie 13 is a weird mix of surprisingly forward-thinking social commentary and typically grubby low-budget slasher-movie aesthetics. The acting is terrible, the pacing is awkward, the dialogue is blunt and utilitarian, and some of the camerawork is seriously questionable (although I saw the movie on Amazon Prime in what was obviously a rip from a degraded VHS copy, so I may not be able to accurately judge the visual style). But this is a movie from 1986 that explicitly takes on the AIDS epidemic, with an often compassionate (if also sometimes clueless) perspective on tolerance and understanding for those afflicted. 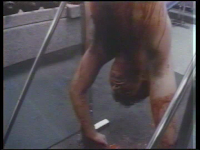 That is, of course, contained within a plot about a serial killer stalking the streets of an unnamed city (shot in Toronto), and an edgy radio talk-show host basically taunting the killer. The movie's hero is Dave Miller (David Adamson), who's kind of a smarmy know-it-all, and who becomes bait for the killer known as M when he encourages the mysterious figure to call in to his show. M brutally slashes his victims and carves an M into their flesh, and police soon discover that all of the victims have AIDS, and most are gay men. There are some crude ideas about homosexuality and the spread of AIDS in this movie, but there's also a blatantly homophobic and sexist police detective who is consistently chastised and corrected by his colleagues, as a sort of avatar of outdated, intolerant attitudes (that also hinder the investigation).

Somehow Dave's friends and colleagues seem to be disproportionately afflicted with AIDS (and are all keeping it a secret), so a bunch of people that he knows fall victim to the killer. Some of the murders are staged with style, including an opening that mimics the famous shower scene from Psycho and a particularly gruesome scene in which a man gets his penis chopped off at a glory hole. The movie tries to walk a line between salaciousness and thoughtfulness, and it doesn't really succeed, in part because the acting is so uniformly awful that none of the more sensitive moments are particularly convincing, and in part because the low-budget effects are also not all that convincing, despite the homages to classic films (Fritz Lang's M, namesake of the killer, also gets referenced). The AIDS angle is really just a framework for your typical serial-killer cheapie, with a rushed resolution to its mystery topped off by some condescending moralizing by Dave in a closing voiceover. It's not exactly a shining example of social progress, but at least it has a few distinctive elements.
Posted by Josh at Monday, August 13, 2018 No comments:

The stilted cowboy poetry of 'The Rider'

Positioned somewhere between naturalistic drama and impressionistic documentary, Chloé Zhao’s The Rider never quite captures the strengths of either one, even with a cast full of compelling characters (or are they subjects?). Zhao casts former rodeo competitor Brady Jandreau and his family and friends as versions of themselves, telling a story drawn from their real-life experiences. The result is a movie that has moments of unvarnished honesty, but is also full of stilted, uncomfortable interactions with the occasional undercurrent of exploitation.

Brady Jandreau plays Brady Blackburn, who when the movie opens has just checked himself out of the hospital against medical advice following a serious head injury suffered in the rodeo ring. After a fairly graphic scene of Brady using a knife to pry out the staples holding a bandage to his head wound and a reunion between Brady and his dad Wayne (Tim Jandreau), the movie cuts to some amount of time later, with Brady’s hair now mostly covering the scar on his skull, although he’s clearly not completely recovered.

Brady may never completely recover, and the conflict between his desire to return to the rodeo and his need to preserve his fragile health forms the core of the movie. Brady putters aimlessly around the family home (which is a trailer), joking and arguing with his dad and his autistic sister Lilly (Lilly Jandreau). He reluctantly takes a job at a local grocery store, and also starts working as a horse trainer, even though he isn’t in stable enough physical condition to ride horses for any amount of time. Whenever anyone asks, he says he’s taking a little time off before returning to professional riding, although it’s pretty clear that he’s fooling himself.

Brady also spends time visiting his buddy Lane Scott (as himself), another former rodeo star who’s now mostly paralyzed and unable to speak, living in a full-time care facility. They watch videos from Lane’s rodeo glory days and even prop Lane up on a makeshift saddle to practice riding as if he, too, could someday return to the ring. These are the scenes that feel the most exploitative, as Scott (like Jandreau) suffered very real injuries (albeit in a car accident, not in the rodeo), as is readily apparent in his performance.

Brady’s interactions with Lilly also have a sort of queasy awkwardness, although most of the movie is more sensitive, especially to Brady’s internal conflict over whether to ignore his doctors’ advice and literally get back on the horse. There’s nothing quite as bad here as the non-professional performances in Clint Eastwood’s The 15:17 to Paris, but most of the dialogue scenes come off as artificial and forced, which is surely the opposite of what Zhao was aiming for. Brady Jandreau gives the most convincing, fully realized performance, conveying his anguish and melancholy in quiet scenes of solitude, as he slowly trains a new horse or just stares off into the South Dakota skyline, pondering his uncertain future.

That South Dakota scenery is one of the movie’s major assets, and Zhao and cinematographer Joshua James Richards take full advantage of it, shooting gorgeous vistas of empty, open prairie, capturing the loneliness and isolation (along with beauty and tranquility) that surround the characters. Zhao immersed herself in the South Dakota Native American community for both The Rider and her debut feature, 2015’s Songs My Brothers Taught Me, and her affection and respect for the culture and the people come through in the film she’s made. It’s a lovingly shot ode to a dying corner of American society—it’s just not particularly effective as a dramatic narrative.

Available on home video tomorrow.
Posted by Josh at Monday, August 06, 2018 No comments: