Just under the wire for the end of the year, here's my annual list of my favorite movies I saw for the first time this year that were initially released in previous years. (Some comments reproduced from Letterboxd.)

1. The Prime of Miss Jean Brodie (Ronald Neame, 1969) I watched this movie on an old tube TV in what was almost certainly the wrong aspect ratio, while I was visiting my grandmother over the summer (it was one of a random assortment of DVDs she had gotten from the library) -- and yet it completely captivated and surprised me the entire time. It's a brilliant inversion of the typical inspirational teacher drama, with a young (and lovely) Maggie Smith as a history teacher at a girls' school in Britain on the eve of World War II. At first she seems like the typical iconoclast who connects with students over the objections of the stuffy administrators, but soon it becomes clear that her influence is toxic and even deadly. The movie is impressively frank and forward-thinking about sex, not afraid to take dark turns, and incredibly well-acted. It was easily the most welcome surprise of my movie-watching this year.

2. The Bridge on the River Kwai (David Lean, 1957) After seeing Unbroken, I have an even greater appreciation for this classic World War II epic about prisoners of war being forced by the Japanese army to help build a bridge in Thailand. Not only is the movie's sheer scope amazing (the final sequence, for which the filmmakers blew up an actual bridge, is one of the best in movie history), but the characters are also incredibly well-drawn, with Alec Guinness, William Holden and Sessue Hayakawa giving great, multi-layered performances. The movie is long but consistently engrossing, with a sense of tragic inevitability as it reaches its end. I can only imagine how immersive it would be to see on a big screen.

3. King of the Hill (Steven Soderbergh, 1993) I'm glad I managed to watch this before it left Netflix streaming (with literally a minute left), because it's easily one of Soderbergh's best, and possibly the most heartfelt, emotionally affecting movie he ever made. Jesse Bradford (who has gone on to a mostly undistinguished career) is wonderful as resourceful teen Aaron, who is forced to fend for himself thanks to a combination of irresponsible and/or sick parents, poverty and callous authority figures. The cast is filled with future famous faces, including Adrien Brody, Katherine Heigl, Lauryn Hill and Amber Benson, all of whom give strong performances. Soderbergh realizes the Depression-era setting masterfully, and his screenplay finds the perfect balance between nostalgia and disillusionment.

4. Ain't Them Bodies Saints (David Lowery, 2013) "The best Terrence Malick movie of 2013," I called this on Letterboxd a few months after seeing Malick's To the Wonder, which I did not care for. But I wouldn't want to reduce Lowery to a simple Malick imitator; although he also uses hushed narration (in the form of letters sent from one character to another) and idyllic nature shots, he's more plot-focused than Malick, and offers up more concrete character detail. Casey Affleck, Rooney Mara and Ben Foster are all excellent, giving the movie's central tragic love triangle a sense of real stakes, without one obvious correct path. Lowery builds up emotions that are real and honest, tied to a suspenseful, thrilling narrative, and that's more than Malick has been able to do for a while now.

5. Gone With the Wind (Victor Fleming, 1939) I'm grateful for this year's 75th-anniversary theatrical re-release, because otherwise I probably would have kept putting off seeing this movie (it takes dedication to set aside four hours for a single movie). It's quite the theatrical experience, too, complete with overture and intermission, and I think seeing it with an enthusiastic audience helped me to get swept up in the epic story. The flaws (mainly in the whitewashed portrait of slavery and Southern life and the gender politics) are obvious, but as an embodiment of old Hollywood grandeur, it's pretty spectacular. And Vivien Leigh is amazing. I was kind of blown away by the depth and complexity of Scarlett O'Hara, especially given how sexist and limited the movie's view of women can be.

6. A Life Less Ordinary (Danny Boyle, 1997) This has to be due for a reassessment, right? I remember it getting mostly negative reviews when it was released, and in general I think it's dismissed as one of Boyle's lesser films. Sure, it's a bit of a mess, but it's a delightful mess, with winning performances from Cameron Diaz and Ewan McGregor and an invigorating anything-goes mentality. The one lovely mid-film musical number makes me think it would probably work like gangbusters as a stage musical.

7. Easter Parade (Charles Walters, 1948) In past years, the TCM Festival has been responsible for a number of top picks on this list, and while I didn't make any amazing discoveries there this year, I did catch up with some enjoyable classics and obscurities, including this beloved Judy Garland/Fred Astaire musical. It's a strong mix of plot-driven and revue-style musical, with an infectious sense of joy and a typically spectacular performance from Garland, who is absolutely magical. I still haven't seen a lot of classic musicals, but whenever I see Garland onscreen, I want to see more.

9. Cutie and the Boxer (Zachary Heinzerling, 2013) I have very little patience for the social-issue advocacy that dominates documentaries these days, so I'm always happy to see acclaim and attention for a movie like this, a lovely and moving personal story about people who've lived fascinating lives. Both temperamental artist Ushio Shinohara and his endlessly patient wife Noriko are complicated, talented people who can't be reduced to simple talking-head interviews, and Heinzerling takes in the range of their daily experiences with insight but without judgement.

10. Donnie Brasco (Mike Newell, 1997) It's sad that we're at a point where it's a relief to see both Johnny Depp and Al Pacino playing normal human beings in a movie. They both do solid work here, in a crime drama that may be derivative of better movies but still packs a punch thanks to the slow-burning tragedy that is the relationship between the two main characters.

'Mozart in the Jungle'

Classical musicians seem like the least likely suspects for an edgy, adult-oriented dramedy, and the pilot for Amazon's Mozart in the Jungle tries way too hard to convince the audience that oboists and cellists and conductors get up to just as much debauchery as rock musicians or actors or athletes. Instead of trusting the audience to be interested in a look into this little-seen world, the show piles on the sexual innuendo, drinking and back-stabbing, and while it's mildly entertaining, it ends up short-changing the show's main unique quality (that it's about classical musicians).

Gael Garcia Bernal gets top billing as a bad-boy conductor (who's been on the cover of Rolling Stone!) brought in to shake up the stagnant New York symphony orchestra, but his character is pretty cartoonish so far. More appealing is the actual main character, a young up-and-coming oboist named Hailey (Lola Kirke, sister of Girls' Jemima Kirke), who gets a shot at a spot in the orchestra thanks to a time-honored cliche (playing beautifully when she doesn't realize an important person is listening). Kirke is charismatic and down-to-earth, and Hailey seems like a person worth watching over multiple episodes. Saffron Burrows is fun as the man-eating cougar of a cellist, but she's every bit as cartoonish as Bernal's Rodrigo.

Co-created by Jason Schwartzman and Roman Coppola, Mozart in the Jungle should exude more New York sophistication and wit, but instead it mostly feels like Amazon's attempt to play catch-up with the likes of Entourage or House of Lies. I've only seen the pilot, so maybe the rest of the season ends up being more character-driven and less self-consciously salacious, but the first episode doesn't really have me eager to find out.

The first and final thirds of Todd Douglas Miller's documentary Dinosaur 13 are pretty riveting (if incredibly one-sided), which almost makes up for the way the middle third gets bogged down in the kind of tedious legal minutiae that would barely pass muster in a Dateline segment. Although there are people who argue otherwise, Miller makes a strong case in the first part of the film that paleontologist brothers Pete and Neal Larson suffered a gross injustice when the U.S. government seized a Tyrannosaurus rex skeleton that they had unearthed in South Dakota in 1990. The Larsons come across as simple, hard-working businessmen who love paleontology and are geekily excited by their discovery. Pete Larson's wife even expresses something akin to jealousy when describing how "Sue," as they named the T. rex, was the real great love of his life. 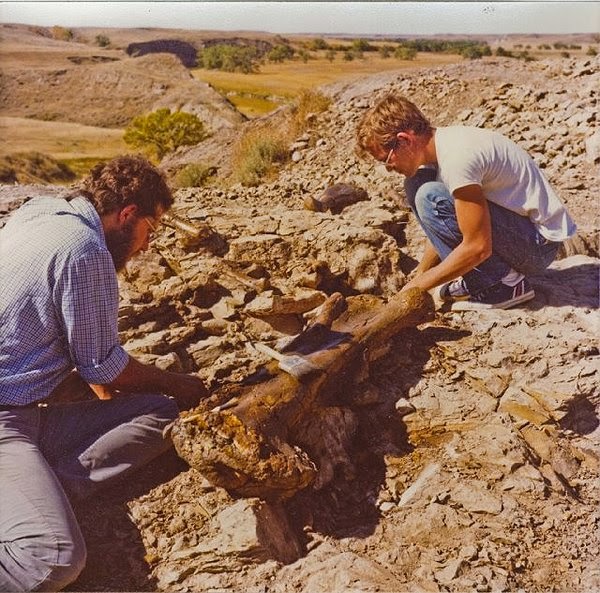 Miller lays the pathos on thick, but he does it well, and it's hard not to feel outraged (along with all the citizens of the Larsons' small South Dakota town, whose protests are seen in archival video) when the government swoops in, taking advantage of the questionable legal status of the land where the skeleton was found, and takes the Larsons' find away from them. But the movie then shifts to the long legal case against the Larsons and their associates, which was less about Sue and more about an alleged pattern of misrepresentation and potential thievery in the business of finding and selling fossils. Although Miller does interview an IRS investigator who was part of the case against the Larsons, every other person in the movie is horrified at these trumped-up charges against the good-hearted brothers, and the relentless bolstering of their case paradoxically ends up making it sound suspect. Also, the detailed account of the testimony and lengthy trial on nearly 150 fraud-related charges is boring and only tangentially related to the fascinating story of Sue (who remained in federal custody for years while the Larsons were investigated and tried).

Eventually the story returns to Sue, who was auctioned off at Sotheby's in highly dramatic fashion and ended up at a world-class museum in Chicago (which to me seems like a much more appropriate location for sharing with the public than the middle of nowhere in South Dakota). The Larsons are at least gracious in defeat (and poor Pete was clearly railroaded by the system when he was sentenced to two years in prison for impropriety related to customs declarations), but their story too often comes across as sour grapes. Miller based his movie on a book by Pete Larson and his wife, so there's no secret where the movie's sympathies lie. The story is fascinating enough not to need such blatant heartstring-tugging, though, and the movie only intermittently gets that across.
Posted by Josh at Saturday, December 13, 2014 No comments: