VODepths: 'Burlesque,' 'Punching Henry,' 'This Is Everything'

Burlesque: Heart of the Glitter Tribe (documentary, dir. Jon Manning) This documentary about burlesque performers in Portland is more of a commercial for local stage productions than an insightful or entertaining exploration of the art form. Manning gives no context for burlesque either as a historical practice or as a resurgent trend, instead just alternating talking-head interviews with performance footage, all of it looking like a low-budget newsmagazine. It's all resolutely superficial, with only brief digressions about some of the performers' personal lives, all of which are quickly moved past in favor of more underwhelming live performances. There's very little structure to the movie, which jumps around from subject to subject without any narrative progression, and doesn't have a clear starting or ending point. Building to a competition (many interviewees are credited as winners of past titles) or a benefit performance might have given the movie a better hook, and placing the community in the context of the city and/or the larger burlesque movement might have shown why these particular people should represent the entire current scene. As it is, this is a sizzle reel for a third-tier reality show, and barely adequate at that. Available on Amazon and iTunes.

Punching Henry (Henry Phillips, Ellen Ratner, J.K. Simmons, dir. Gregori Viens) Henry Phillips is the kind of comedian who garners lots of respect from other comedians but has never broken through to mainstream success, and his 2009 autobiographical feature Punching the Clown has built up a small cult following. Punching Henry is a quasi-sequel but seems to stand on its own (I never saw the previous movie), depicting the fictionalized life of Phillips (playing himself) as a struggling comedian. Phillips (who co-wrote the movie with director Gregori Viens) clearly called in a lot of favors, and famous comedians including Tig Notaro, Jim Jefferies, Sarah Silverman and Doug Stanhope show up in supporting roles. The problem is that Phillips himself has no charisma, no screen presence and almost no funny jokes. The episodic movie follows his misadventures in Hollywood, with some vaguely Curb Your Enthusiasm-style cringe humor and some really outdated, broad swipes at social media and viral marketing. Phillips' comedy is mostly in song form, and his folky compositions are at best semi-funny, and often just in a conceptual way. I'm sure he's a great guy for other comedians to pal around with, but this movie offers a good demonstration of why he's not more famous. Available on Amazon and elsewhere.

This Is Everything: Gigi Gorgeous (documentary, dir. Barbara Kopple) Most of YouTube Red's feature films have been low-budget, low-concept cash-ins for insular YouTube celebrities, and this documentary about transgender beauty vlogger and YouTube star Gigi Gorgeous could easily have been the same thing. But Oscar-winning director Barbara Kopple (Harlan County U.S.A., Shut Up & Sing) elevates the material, and what had the potential to be a crass promotional piece ends up as a slightly more sophisticated and sensitive promotional piece. As a YouTuber from her early teens, Gigi has plenty of footage to document her transition from shy gay boy to glamorous woman, and Kopple supplements it with talking-head interviews (mostly featuring Gigi's family) and plenty of intimate moments, including multiple surgeries. It's a mostly uplifting, positive story, as Gigi has a supportive family and plenty of resources to fund her transition exactly the way she wants to, and there are only a handful of slightly negative moments that pass quickly. The early steps of Gigi's journey are more compelling than her more recent celebrity adventures, since she's ultimately still a narcissistic, somewhat annoying online and reality TV star, even if she's dealt with a lot of adversity to get there. Available on YouTube Red.
Posted by Josh at Monday, March 20, 2017 No comments:

The kind of movie that would probably go direct to HBO these days, Thirteen Days is a solid if occasionally hokey account of the 1962 Cuban Missile Crisis, depicting the political maneuvering in the White House among President John F. Kennedy's team of advisers. In particular, it focuses on Ken O'Donnell (Kevin Costner), a longtime Kennedy associate whose steady clear-headedness is portrayed as the secret weapon holding the White House team together. In reality, that may not have been the case (sources seem to disagree on how important O'Donnell really was), but it works for the movie, giving the audience an everyman character to identify with who isn't one of the most famous politicians in American history.

Even those famous politicians, brothers John and Robert Kennedy (played by Bruce Greenwood and Steven Culp, respectively), come across as grounded and real, relatively young men who find themselves in charge of an entire country and responsible for keeping it from being consumed by nuclear war. The movie portrays the warmongering American military leaders as nearly as much of a danger as the Soviets, eager to push the country into war at every provocation. Thanks to counsel from O'Donnell and from his brother, Kennedy holds the line, and his confrontations with seasoned military commanders (who are older than him and clearly consider themselves wiser) are thrilling to watch.

The movie is a pretty engrossing procedural even when it isn't filled with tension, showing how various officials perform their duties during a crisis that lasts nearly two weeks (hence the title), and how recent presidential appointees mesh with career military and political officials. One of the movie's best moments comes as U.N. ambassador Adlai Stevenson (Michael Fairman), a veteran of multiple failed presidential campaigns and a relic of the country's political past, prepares for a showdown with the Soviet U.N. ambassador, and Robert Kennedy anticipates pulling Stevenson out because he doesn't have the spine to stand up to the Soviets. But Stevenson comes through in a big way, proving that the generations of patriots can work together for a common cause. It's a rousing and effective message that seems almost quaint in the current political climate.

Costner is solid as O'Donnell, although he lays on the Boston accent perhaps a little too thickly. And while it's a smart choice to build the movie around a relatable guy, the scenes between O'Donnell and his wife and kids are all dreadfully cheesy, hammering home the idea that the idyllic home life of Americans could be destroyed in an instant if the government didn't find a way to avert nuclear war. The stakes are clear enough in the high-level political meetings without the blatant tugging on the heartstrings. Still, the sentimental scenes (including some inspirational moments with military pilots) are minimal, and they're outweighed by the smartly written political maneuvering. If it were made for HBO now, Thirteen Days would probably win a ton of Emmys, instead of barely making a dent at the box office as it did when it was released theatrically.
Posted by Josh at Monday, March 13, 2017 No comments: 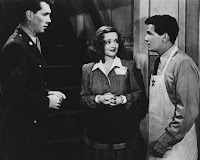 In my ongoing (albeit recently slowed) efforts to cover the entire Bette Davis canon, I've always skipped over 1944's Hollywood Canteen whenever it showed up on TCM, because all I read about it was that Davis' role was little more than a cameo. But thanks to the episode of Karina Longworth's You Must Remember This podcast about the movie and the real-life Hollywood Canteen, I learned that Davis' connection was a lot stronger than I previously thought. The truth is that Davis really doesn't make much more than a cameo in the movie, but she's one of the driving forces behind the fascinating Hollywood Canteen project, and so while she's not credited as a producer on the film, she's in some ways responsible for its entire existence. 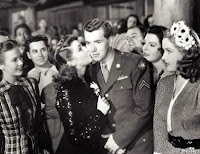 As a movie, Canteen isn't particularly good, although it's a fascinating historical artifact for anyone interested in classic Hollywood (which is why it was a perfect subject for YMRT). Davis and John Garfield founded the actual Hollywood Canteen in 1942 as a haven for members of the military spending time in Los Angeles awaiting deployment overseas. It recruited cast and crew from Hollywood studios to work as everything from entertainers to waiters to dishwashers in a nightclub that was free to anyone enlisted in the military service (including women and service members from allied foreign countries). It's the kind of apparently uncomplicated patriotism that would never happen in Hollywood today (which isn't necessarily a bad thing), and the movie reflects the wholesome positivity that the project was meant to embody. It's more or less a feature-length version of a "buy war bonds" ad, albeit with as much propaganda for Hollywood itself as for the war effort. 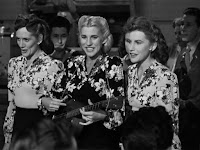 The thin plot involves two soldiers, Robert Hutton's Cpl. Slim Green and Dane Clark's Sgt. Nowlan, on leave from the Pacific theater for a few days before shipping back out to war. They hang out at the Canteen, where Slim inexplicably charms all the celebrities and becomes the beneficiary of loads of special treatment, including a weekend spent with starlet Joan Leslie (who was a big name at the time but has since been mostly been forgotten). Meanwhile, Nolan eventually hooks up with a sassy studio messenger girl played by Janis Paige, who displays far more personality and independence than the saintly Joan. All of this stuff takes up maybe a third of the movie and just sort of trails off at the end; it's strange that Slim and Joan (playing herself, like the dozens of other celebrities in the movie) have a traditional romance, since it seems to imply that going to the Canteen allows soldiers to hook up with famous actresses. And Joan is portrayed as such a sweetly wholesome young woman (she lives with her parents and won't allow Slim to accompany her inside the house when they're not home) that the movie's contrast with Hollywood debauchery borders on self-parody. 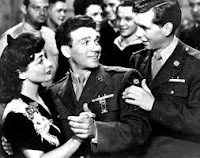 The rest of the movie is devoted to musical performances at the Canteen, from acts including Roy Rogers, the Andrews Sisters, dancers Antonio and Rosario, Jimmy Dorsey, Eddie Cantor and more. Some of these performances are entertaining (the Andrews sisters are fabulous) and some are kind of a chore (a dreadful bit featuring Jack Benny and a famous violinist goes on forever), but they're all more fitting for a variety show than a movie, even a musical revue. There are also numerous patriotic speeches, mostly from the cameo-ing celebrities (whose names are conveniently announced by the main characters). Davis plays an almost entirely expository role, showing up every so often to explain the purpose of the Canteen or to award Slim some new, entirely undeserved perk. She's upbeat and friendly, which is a bit off-brand for her but makes sense given that she's there solely to promote this huge charitable endeavor she's in charge of. It's not a notable onscreen role for her, but it's a pretty impressive document of one of her biggest offscreen achievements.
Posted by Josh at Monday, March 06, 2017 No comments: