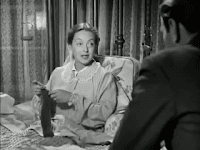 Although she gets a fancy "Also Starring" title card in the opening credits, Bette Davis doesn't actually show up until Phone Call From a Stranger is nearly over, and her role is the kind of maudlin old lady that she rarely played, even later in her career. The real star of Phone Call is Davis' husband at the time, Gary Merrill, and Shelley Winters plays the kind of sassy-dame role that Davis would have gotten if this movie had been made a decade or two earlier. The movie is awkwardly structured, with the scenario indicated by the title not coming up until halfway through the story, and the relaxed first half is a lot more enjoyable than the heavy-handed, melodramatic second half (of course, Davis only gets called on for the heavy-handed melodrama).

In that first half, Merrill's lawyer David Trask is a passenger on a flight to Los Angeles, where he bonds with three other passengers as they wait for the delayed departure, and then again when they have to make an emergency landing in Utah to sit out a storm. David befriends struggling singer/actress Binky Gay (Winters), loudmouthed novelties salesman Eddie Hoke (Keenan Wynn) and brooding doctor Robert Fortness (Michael Rennie), and they exchange contact information so they can stay in touch after they go their separate ways. There's a loose hangout vibe to these early scenes, even when Robert discloses a dark secret to David so he can ask for legal advice. 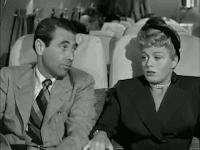 The exchanging of contact info becomes crucial to the second half of the movie, after the plane crashes and David is one of the only survivors. He takes it upon himself to contact the families of his three dead friends (I guess the rest of the dead passengers are out of luck), both learning and imparting important lessons in each case. The movie devotes lengthy flashbacks to each passenger's sob story, robbing a lot of the liveliness and fun from the characters in the process. Binky is unable to please her overbearing mother-in-law. Robert is tormented by a fatal mistake that ended up estranging him from his family. And Eddie uses an old sexy photo of his wife (Davis, finally) and a jovial attitude to mask his difficulties at home.

David, too, has domestic troubles, and he's on the plane fleeing from his cheating wife, who's at home with their children, begging to be forgiven. He doesn't get a flashback, but he explains his situation pretty thoroughly, and he has a couple of fraught phone conversations with his wife. His final revelation that he should go back to his family and forgive his wife is jarring and abrupt, and it makes it seem like the only reason he offered closure to these other families was so he could find an excuse to go back to his own. Davis, as Eddie's disabled wife, gives a florid speech about forgiveness and love, which is obviously meant to be a big showcase for her but just sounds hokey and pathetic. If she showed up in the movie as a favor to Merrill, she wasn't able to do enough to save it.
Posted by Josh at Thursday, April 04, 2019 No comments: