The Cabin in the Cotton opens with an overwrought disclaimer describing the historical conflict between plantation owners and sharecroppers in the American South, and assuring moviegoers that the producers of the film have no desire to take sides. That dull evenhandedness infuses the rest of the film, which works hard to portray the disagreements between the rich landlords and their indentured workers as something to be solved with minor compromise, rather than as a system built on inequality and prejudice. 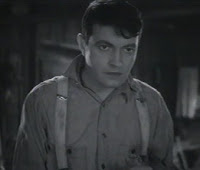 Not that the filmmakers have an obligation to present a detailed political critique within the context of what is essentially a B-level melodrama, but the movie spends so much time foregrounding the social commentary that it would be nice if it were less laughable. A big part of the problem is leading man Richard Barthelmess, a silent-era star who didn't have much of a career once sound came in. He looks sallow and lifeless as sharecropper's son Marvin Blake, who ends up caught between working for the rich plantation owner and helping his friends and relatives who work the fields. There's a weird undercurrent of anti-intellectualism to the story as well, since Marvin's ambitions to succeed in school are what take him away from his roots into the corrupt world of the upper class, and he's relentlessly mocked for his book-learnin' by the people he grew up with.

He's also torn between the wholesome but boring girl next door (literally) and Madge, the sexually aggressive daughter of the plantation owner. Naturally, Bette Davis' performance as Madge is the best thing in the movie, and she's excellent at playing the sultry, snobby rich bitch. She shamelessly throws herself at Marvin, using her feminine wiles to manipulate him into betraying his class, and then snubbing him when he speaks up in favor of the poor. Davis' performance is playful and seductive, and features one of her all-time greatest (and most quoted) lines: "I'd like to kiss you, but I just washed my hair." As great as Davis is, however, she and Barthelmess have no chemistry, since he plays his entire part like he's suffering from mild indigestion (including his big speech at the end). Still, the movie is a great example of how Davis could shine in even the dreariest material.
Posted by Josh at Wednesday, May 29, 2013 No comments:

The 2001 remake of William Castle's 1960 schlock-horror classic 13 Ghosts (which I wrote about a year ago) was part of a short-lived initiative to revive Castle properties as modern horror B-movies (it followed a 1999 remake of House on Haunted Hill), but it takes only the barest elements from the original movie, changing a hokey family ghost story into a loud, R-rated killing spree. Plot-wise, there's still a down-on-their-luck family inheriting a creepy house from their deceased uncle, and the house is still filled with the titular ghosts (only 12, as the 13th is slated to be one of the family members), but the approach is completely different.

While the ghosts in the original turned out to be sort of harmless, here they are bloodthirsty and deadly, and once the family members end up inside the house, they're almost immediately hunted by the murderous apparitions. The house itself is the movie's most impressive element; it's a marvel of production design, a shifting puzzle box of glass and metal gears that one character reveals is "a machine designed by the devil and powered by the dead." Nearly the entire movie takes place in this one location, over the course of a single night, and director Steve Beck (a special-effects veteran making his directorial debut) creates a claustrophobic atmosphere as the characters run back and forth between corridors and locked rooms.

The characters themselves, however, are pretty one-dimensional, and the plot is full of so much mystical mumbo jumbo that it ends up being total nonsense. The ghosts, although certainly gorier than those in the original, aren't very scary, and the incoherent plotting takes away much of the potential suspense. The cast is a mix of talented actors slumming for a paycheck (Tony Shalhoub, F. Murray Abraham, Embeth Davidtz) and C-level performers you'd expect to see in a movie like this (Matthew Lillard, Shannon Elizabeth, rapper Rah Digga), but everyone ends up on the same mediocre level.

They're really just pieces to move around the elaborate set and react to the less impressive special effects. The filmmakers recycle one of Castle's gimmicks by updating the idea of special glasses being used to see the ghosts, but since the movie wasn't ever shown in 3D, the point is kind of lost. As schlocky as Castle's work was, at least it had a personal touch; this version is merely a product trading on vague name recognition.
Posted by Josh at Monday, May 13, 2013 No comments: