Shot somewhere around 1999 but not released until 2005, Lucky 13 probably only found distribution after such a long time thanks to co-star Lauren Graham's Gilmore Girls fame. It certainly doesn't deserve attention for anything else -- not its lame, half-assed story, weak dialogue, annoying characters or unfunny jokes. And certainly not for charisma-free leading man Brad Hunt, whose performance is so smarmy that I initially assumed he must be the writer and director as well, putting together a vanity project about how attractive and charming he is.

But no, Hunt is just the crappy actor hired by actual director Chris Hall to play 20-something loser Zach, who's spent his entire life pining away for his neighbor Abbey (Graham). When Abbey announces she is moving to New York City to become an artist, Zach finally asks her out on a date, and he has just a few days to make himself the perfect boyfriend material for Abbey. Thus he decides to revisit all 12 of his past girlfriends to learn why he could never hold onto a relationship.

This is a pretty standard contrived rom-com setup, but Hall and his co-writers completely screw it up with terrible pacing, lame jokes and barely sketched characters, including all of Zach's exes, many of whom barely even get any lines. Only a couple of his exes actually serve their ostensible plot purpose and give him some advice; otherwise they just show up for bad jokes or as background filler. I'm not entirely sure there are even 12 of them.

In addition to Graham, Lucky 13 is full of soon-to-be-famous faces, including Kaley Cuoco, Jenna Fischer, Taryn Manning, Ever Carradine, Pamela Adlon and Sasha Alexander (also a producer on this mess). There's also Harland Williams in a surprisingly subdued performance as Zach's goofy best friend, plus X's John Doe and That '70s Show's Debra Jo Rupp as his parents. The movie isn't worthy of any of their talents.
Posted by Josh at Saturday, April 13, 2013 No comments:

Alfred E. Green directed Bette Davis in a number of her early films, including the 1932 hidden gem The Rich Are Always With Us. Green's The Golden Arrow isn't as entertaining as The Rich Are Always With Us, but it has a similar cheeky tone and playful attitude toward the quirks of the idle rich. Davis stars as what at first appears to be the heiress to a cosmetics fortune, a spoiled young woman who spends all her time lounging about on her yacht off the coast of Florida and entertaining various suitors. But Davis' Daisy is actually an actress hired to pretend to be a cosmetics heiress, in order to drum up publicity for the company.

This particular bit of information doesn't come to light until about halfway through the movie, after which Daisy has already proposed marriage to humble newspaper reporter Johnny Jones (perpetual Davis co-star George Brent), as a mutual business arrangement so he has leisure time to write his novel and she can fend off the advances of her persistent suitors. Except he still thinks she's a real heiress, and her bosses at the cosmetics company don't want her getting married at all. Got that? It's a convoluted setup that gets even more ridiculous as the movie goes on, but Green plays it all as light farce, and Davis has loads of fun as the street-smart dame who's infiltrated high society.

The ending involves a set piece built around some uncomfortable domestic violence humor, and the story kind of runs out of steam by that point anyway. But Davis and Brent have decent chemistry (although Brent is, as always, sort of bland by comparison), and the bits of sly commentary about the indulgences of the rich are entertaining and sharply delivered. It's rare to find a gem among these generic programmers that Davis made early in her career, so even though The Golden Arrow has its flaws, it still qualifies as a pleasant surprise.
Posted by Josh at Friday, April 05, 2013 No comments: 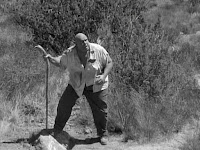 Sadly, last year I missed out on the White Elephant Blogathon, in which bloggers submit movie suggestions to a pool and then write about a randomly chosen selection from another blogger, but I'm back on board this year. The first year I participated, I got something boring (Dr. Dolittle: Million Dollar Mutts), and the second year, I got something terrible (Scorpion Thunderbolt), and this year I got a movie that's both boring and terrible, Coleman Francis' The Beast of Yucca Flats. 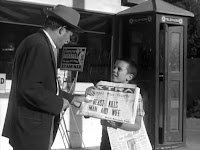 Although Beast is probably best known for its appearance in an episode of Mystery Science Theater 3000, I did not cheat -- I watched the original film without any comedic commentary, although I did check out some MST3K clips online. And boy is this a movie that needs comedic commentary to liven things up. It's only 54 minutes long, but it feels like a lifetime, with maybe 10 minutes of plot crammed into endless scenes of cars driving and parking (seems Francis must have been a big influence on Birdemic's James Nguyen), all narrated semi-coherently by Francis himself, since there was no sound recorded during production.

That means that either Francis is narrating in his rambling, ponderous style (sometimes filling in plot and character details, sometimes waxing poetic about nuclear armageddon), or he's throwing in awkwardly dubbed dialogue that can only be delivered when characters are offscreen or have their faces obscured in some way (since none of the words match up to the movement of the actors' mouths). It's possible to achieve a sort of otherworldly effect this way, and the movie's opening scene (which seems to have no connection to the rest of the story), in which a nearly naked woman is strangled by an unseen brute as a clock ticks loudly, is actually pretty creepy. 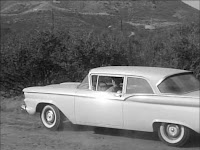 But the rest of the movie is just moronic, with a Soviet scientist played by Ed Wood favorite Tor Johnson getting caught up in a nuclear blast and transformed into the beast of the title. Mostly that means he lumbers around the sparse landscape, occasionally listlessly choking some anonymous passerby. Francis fails at creating suspense or even shocks; Johnson looks less like a beast and more like a guy with a bad sunburn. He clumsily stalks incompetent cops and an annoying family on vacation, but none of the performances have enough energy to make the threat seem urgent or even particularly dangerous. When the beast is defeated, it's the final anticlimax in a movie that's just one long disappointment.

Kenji Fujishima wrote a fascinating post on my pick, Cannibal Women in the Avocado Jungle of Death, which I definitely need to revisit.
Posted by Josh at Monday, April 01, 2013 2 comments: