For a film made in 1933, Ex-Lady features remarkably progressive values, but its open-mindedness (helped by being made before the implementation of the Production Code) only carries it so far. It's refreshing and even a little jarring at first to see single career woman Helen Bauer (Bette Davis) carrying on a sexual relationship with ad executive Don Peterson (Gene Raymond), and to stand up to her very old-fashioned parents when they try to pressure her into getting married. It's obvious these two are having plenty of premarital sex with no consequences, and that they are completely happy about it. 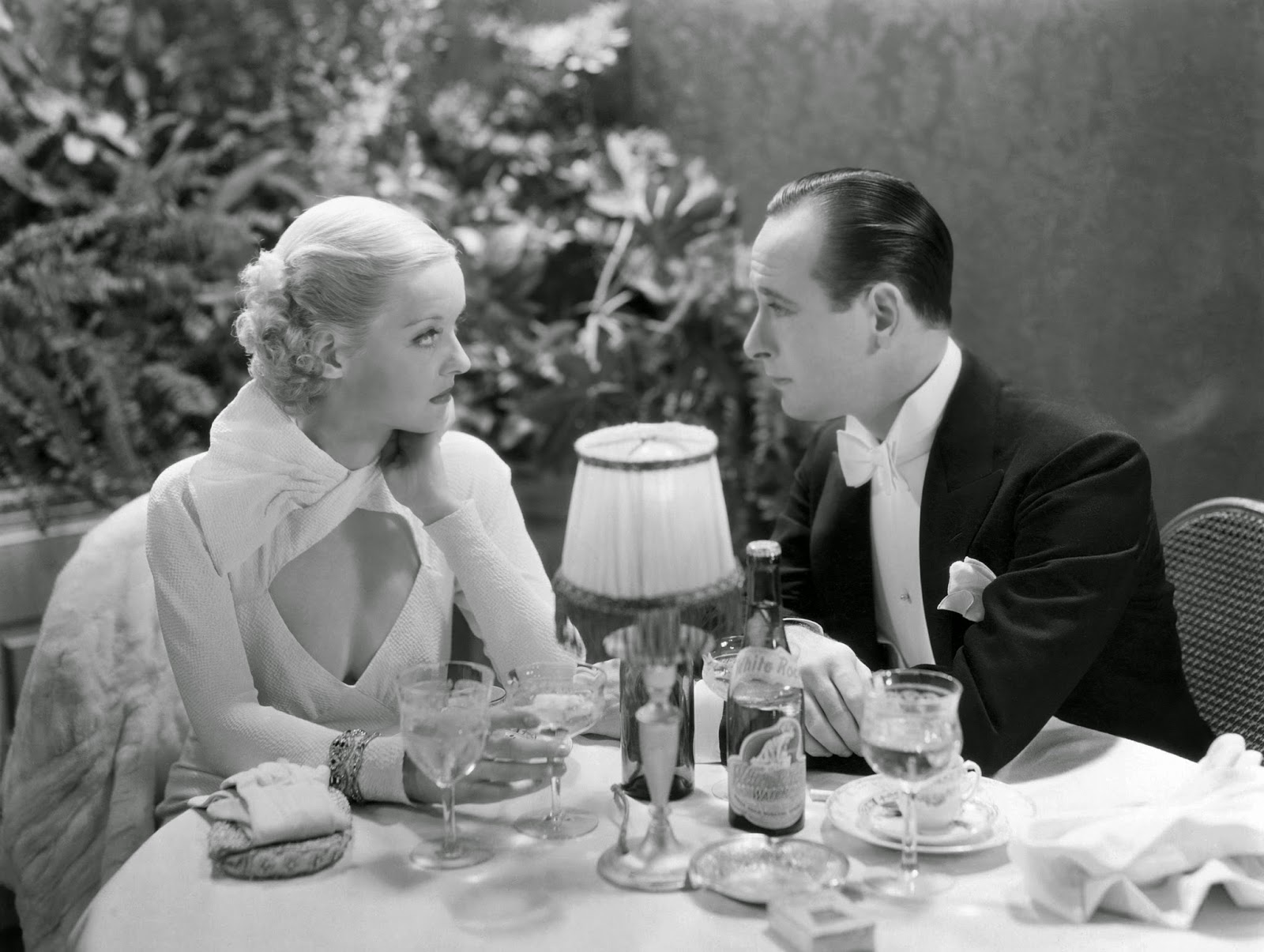 Unfortunately, the movie has them get married anyway, at Don's insistence, although at least becoming a wife doesn't mean that Helen has to stay home and cook all day. She joins Don's advertising firm as a junior partner, and it's clear throughout the movie that her skills as an illustrator and graphic designer are in much higher demand than Don's skills at whatever he does. But this isn't quite the proto-Mad Men it sounds like; the intrigue is mostly dull and plodding, and the characters lack the spark they seemed to have at the beginning of the movie. Once married, Helen and Don immediately get into a rut, made worse by financial troubles at the ad agency.

Despite their early hedonism, they both turn out to be rather dull, and even Helen's antipathy toward marriage is more about her being a stubborn stick in the mud than a free-spirited lover. She decides that getting married was the cause of their problems, just as she predicted, so they decide to separate and become lovers again, living apart and going on dates every so often, while half-heartedly pursuing (but never consummating) dalliances with other people. There's no sense of what drew Helen and Don together in the first place, nor any real sense of what then pushes them apart. The movie ends with the pair making a renewed commitment to married life, but again, it's hard to see what has changed that will make their second effort any more successful.

As usual, Davis is strongest when she's playing Helen as a feisty, independent woman, and she's less appealing once Helen gets needy and indecisive. Raymond is more of a blank slate, and he plays Don as a reluctant reactor, just as likely to go along with Helen's progressive marital ideas as he is to fall back on convention, depending on who's around. It makes for a mismatched relationship, with little audience investment in whether the pair will stay together or not. As carefree, rule-flouting lovers, they're refreshing, but as a couple, they're a total bore.
Posted by Josh at Monday, January 26, 2015 No comments:

The generic title of Man Seeking Woman doesn't indicate the surreal tone of the comedy starring Jay Baruchel as a lonely single guy in Chicago, and it isn't going to do the show any favors in its struggle to find an audience. Relegated to FXX, the network where FX sends shows to die (exception: It's Always Sunny in Philadelphia), Man Seeking Woman seems destined to air for a single low-rated season and then disappear, leaving only semi-fond memories. It's not a terrible show, but it's not distinctive enough to overcome its disadvantages, nor is it outrageous enough to compete with It's Always Sunny, whose 10th season serves as a lead-in.

The bare bones of the premise are as simple as the title implies: After getting dumped by his longtime girlfriend, slacker temp Josh (Baruchel) is looking to meet someone new. He has a best friend (played by Eric Andre) and a sister (played by Britt Lower) who help him. But Josh's mundane relationship struggles are portrayed with a heavy dose of surreal fantasy that exaggerate the metaphorical difficulties of dating. Ever feel like you've been set up on a blind date with a troll? Josh ends up having dinner with an actual troll, who lives under a bridge and eats garbage. Ever feel like your ex's new significant other is the worst person in history? Josh's ex-girlfriend turns out to be dating Adolf Hitler (played by Bill Hader). And that's just in the first episode.

While these bits offer amusing takes on the overblown drama of relationships, every joke is drawn out into a set piece that lasts several minutes, meaning that they're consistently beaten into the ground. When Josh gets dragged into a relationship courtroom for perceived violations against his new girlfriend, it's sort of funny, but by the third time he's there defending his case, the joke has entirely lost steam. I was mistakenly hoping for a grounded but raunchy romantic comedy along the lines of the excellent You're the Worst (which recently received the FX kiss of death by being transferred to FXX), and the weird thing about Man Seeking Woman is that it's still trying to be that kind of show amid all the fantastical touches. But the fantasy bits just end up putting the emotions in air quotes, since every step in Josh's dating journey becomes a belabored sketch. A show about a single guy who actually dates trolls and fends off sex aliens might be refreshing, but Man Seeking Woman reduces those elements to cheap punchlines in what turns out to be a pretty unremarkable romantic comedy.

It's been several years since I wrote about the Thai thriller 13: Game of Death (also known as 13 Beloved), which was apparently a huge hit in Thailand, winning awards and spawning a sequel as well as an American remake, 13 Sins. The remake sticks to the same basic premise, with a downtrodden loser getting a mysterious phone call offering him huge amounts of money to engage in ever-more-depraved acts, starting with something mildly unpleasant and ending in murder. Like the original, 13 Sins has a tough time modulating its tone, shifting from dumb comedy to brutal horror to sappy melodrama, and not finding much success in any of them. 13 Sins also alters and adds to the mythology behind the sinister game, using it to bring in a final-act twist, but not in a way that makes the story more effective or illuminating.

Mark Webber, who's been solid in indie-movie supporting roles, is a bit of a wet blanket here as sad-sack main character Elliot Brindle, whose troubles include losing his job, trying to plan a wedding to his pregnant fiancee, and having to care for both a mentally challenged brother and a racist, destitute elderly father. He doesn't really hesitate to play the game that starts with the command to kill a fly, and soon he's gleefully engaging in mayhem and property destruction. But his journey from meek and passive to wild-eyed and aggressive doesn't have much depth, and it's hard to care about whether or not he can complete his tasks and turn his crappy life around.

Director and co-writer Daniel Stamm doesn't help things by giving extra focus to the nonsensical mythology, with Ron Perlman wasted in a supporting role as a detective tracking Elliot, and Pruitt Taylor Vince playing a stereotypical conspiracy theorist who helpfully explains the backstory. It just leads to disappointment with the anticlimactic twist at the end, and the supposed ethical dilemmas presented by the situation aren't as complex as the movie makes them out to be. Devon Graye is irritating as the mentally challenged brother, who, in typical movie fashion, is as intelligent or oblivious as the plot calls for him to be at various times.

The movie closes on a dumb laugh line that undermines the potential horror of what came before, not that it was all the disturbing to begin with. The higher production values give this version of the story some added gruesomeness (although the infamous shit-eating challenge from the original is left out), but that doesn't give it any added intensity. The original may be inconsistent, but at least it has some vision behind it; this is just an anonymous retread.
Posted by Josh at Tuesday, January 13, 2015 No comments: