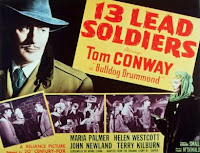 Bulldog Drummond is a sort of second-rate Sherlock Holmes, created in 1920 by author Herman Cyril McNeile under the pen name Sapper. He starred in 17 novels from 1920-1954, as well as 26 movies from 1922-1969, played by 15 different actors. According to Wikipedia, he was an important influence on later pulp characters, as well as on James Bond, but he seems pretty much unknown today (although he may be more popular in the U.K., where the novels originated). 13 Lead Soldiers is one of the later Drummond films, and the second of two to star Tom Conway as the main character. It's a pretty rudimentary murder mystery, with a running time of just 64 minutes and a limited number of characters.

The lead soldiers of the title are antiques from the era of William the Conqueror, two of which are stolen when their owner is murdered at the beginning of the movie. Drummond, a wealthy war veteran and armchair detective, is enlisted by the owner of two more soldiers to find out who is behind the murder. The eventual reveal involves hidden treasure and secret passageways, but it's all treated as very mundane, and Drummond and his sidekick Algy Longworth (John Newland) never get particularly worked up about the crime-solving or the danger they're potentially in.

They spend far more energy competing to seduce the women they're interrogating and/or protecting, and a running subplot in the movie involves Longworth pretending to be Drummond because he believes it will help him score with the ladies. The condescending sexism pervades the movie, but apparently it's mild compared to the racist and xenophobic attitudes Drummond expressed in many of McNeile's novels (maybe that's why he's no longer appreciated). As a murder mystery, 13 Lead Soldiers is rote and mediocre, although Conway has a bit of debonair charm as Drummond (who was apparently more of a thug in other portrayals). As a forgotten piece of pop-culture history, however, it can be fascinating. (Watch the whole thing for yourself on YouTube.)
Posted by Josh at Thursday, June 13, 2013 No comments:

ABC Family's original dramas seem to have two basic modes: Wholesome family-driven shows like Switched at Birth and the recent The Fosters, and superficially "dark" teen dramas like Pretty Little Liars and The Lying Game. Twisted falls in the latter category, with its ominous murder mystery and pouty, tortured teens. It's all completely sanitized and safe, despite the dead teenage girl who shows up in the premiere (and whose murder presumably forms the main plot thread of the season). There's another offscreen death at the beginning of the episode, as 11-year-old Danny (Avan Jogia) kills his aunt for mysterious reasons. Five years later, he's out of prison and attempting to restart his life by returning to his close-knit hometown and attending high school with his former best friends Jo (Maddie Hasson) and Lacey (Kylie Bunbury).

Danny looks way too much like a model to have spent the past five years in juvenile detention, and in general the show's "menace" is pretty laughable. The rest of it is generic teen-soap nonsense, enlivened slightly by Hasson's appealing performance as the too-pretty high school "outcast" and Denise Richards' basically reprising her role from the modern classic Wild Things as Danny's bitchy, self-centered mother. The banter is half-baked (although the show does its best to coin "socio" as a new slang term, referring to Danny's possible sociopathic nature) and the characters are mostly one-dimensional. Fans of Pretty Little Liars and The Lying Game may find some entertainment here, but all I really want from ABC Family is another season of Bunheads.

I like The Rock, but man is he phoning it in as the host of TNT's muddled Survivor/Fear Factor/The Mole hybrid The Hero. About half of his hosting segments just involve him talking in front of a green-screened backdrop in the same style as the contestant confessionals, and he's not even present for all of the big physical challenges in the first episode. He may be one of the show's producers, but the whole thing seems sort of beneath him, since he's a legitimate movie star at this point. He's also pretty much the only entertaining aspect of this show, which has a weak premise and a cast full of reality-TV stereotypes.

I'm pretty sure that signing up for a TNT reality show automatically disqualifies a person from being a hero, but the idea here is that the nine contestants are competing for some nebulous title of "hero," which is defined partly by completing intense physical challenges that involve facing fears, partly by resisting and/or giving in to temptation when faced with offers of compensation in exchange for screwing over fellow contestants, and partly by some undefinable quality that will be judged by the audience, who ultimately get to vote for the winner. In practice this means some standard-issue reality-competition set pieces (rappelling off the side of a building, crawling through a maze in the dark) and even more standard-issue reality-TV bickering, which is about as far from heroic as it gets.

The Rock does his best to play up the idea that this all has something to do with heroism, and his most amusing habit is constantly addressing the audience as "America" ("Hola, America" is the first line of the show). Despite higher production values than some cable reality shows, and impressive-looking locations in Panama, The Hero is not nearly as exciting as The Rock pretends to think it is.