At least in its first two episodes, The 100 seems to be struggling between a gritty, Battlestar Galactica-style sci-fi drama and a swoony teen romance, and since it airs on The CW, there's a good chance that the second mode will ultimately win out. Like Battlestar, the show follows a tiny core of humanity that has survived the near-destruction of Earth and is living in cramped spaceships; in this case, survivors of a nuclear holocaust have been inhabiting a complex of multiple space stations for nearly 100 years since nuclear war wiped out most of Earth's population. The scenes that take place on the space stations, with character played by actors like Henry Ian Cusick, Isaiah Washington, Paige Turco and Kelly Hu, have a strong Battlestar vibe, as worn-out commanders and officials try their best to make impossible moral decisions.

But the core of The 100, and the source of the title, are the 100 teenage characters who are sent back to the desolate Earth to see if it can be re-inhabited. They're all convicts who would probably have been sacrificed in the resource-deprived society in space, so they're prone to violence and rebellion, and that plus their teenage hormones makes for a very volatile situation on the ground. While there are some Lord of the Flies-like moments of violent chaos, the show is just as interested in which of the pretty people will hook up with each other, and there are plenty of Tumblr-ready relationships being formed already. With its rudimentary production values and inconsistent acting, The 100 feels a bit like an old-school basic cable series, but airing on Syfy or USA probably would have freed it from the obligation to appeal to a teenage fangirl audience. On The CW, the 'shippers are likely to end up at the helm.

First off, I was one of the Kickstarter backers of Veronica Mars, so it wouldn’t be entirely wrong to consider me in the tank for the movie. But that’s pretty much the entire point of a movie financed via nearly $6 million in donations from fans of the 2004-2007 cult TV series. Unlike Serenity, the 2005 movie adaptation of Joss Whedon’s little-watched TV series Firefly, Veronica Mars isn’t really designed to introduce a new audience to the title character (Kristen Bell) and her friends and enemies. While it does feature a stand-alone plot (and take place nine years after the end of the TV series), the movie is structured around callbacks and inside jokes, the kind of references that will make hardcore fans gasp with delight (as they did at the midnight screening I attended).

That’s not to say that the movie is nothing more than fan service. The callbacks and references were an important part of the TV series, too, so it makes sense that creator Rob Thomas (who directed and co-wrote the movie) would include them in the movie version. A big part of the appeal of Veronica Mars both as a TV show and as a movie is the collection of shady characters in Veronica’s hometown of Neptune, California, to which she returns after a nine-year absence. Since the show ended, former teenage detective Veronica has graduated from Stanford with a degree in psychology and come in at the top of her class at Columbia Law School, and she’s up for a job at a prestigious Manhattan law firm when she gets a call from old flame Logan Echolls (Jason Dohring), who’s been charged with the murder of his rock-star girlfriend (who also happens to be an old high school classmate).

Veronica’s return to Neptune to help Logan conveniently coincides with her 10-year high school reunion, which is a good excuse for Thomas to trot out brief appearances from a whole range of supporting players from the TV show. The central mystery isn’t as compelling as Veronica’s investigation of her best friend’s death during the show’s first season, but the involvement of Logan as the prime suspect definitely ups the stakes for Veronica. Whenever it seems like Thomas is just placating fans with familiar references, he’ll throw in an unexpectedly strong emotional moment between Veronica and Logan or Veronica and her private-eye dad Keith (Enrico Colantoni).

It also helps that Bell is always at her best as Veronica, and she slips back into the role like no time has passed. Thomas and co-writer Diane Ruggiero are still great at coming up with snarky banter and hard-boiled narration for Veronica, and although the movie may be clumsy at times, it’s always entertaining. Fans may quibble about certain aspects of the story (more time for Veronica’s buddies Wallace and Mac, who seem to get short shrift in favor of Veronica/Logan swooning, would have been nice), but ultimately Thomas, Bell and the entire cast and crew have done exactly what they promised their Kickstarter backers they would do. It’s hard to argue against such an obvious labor of love.
Posted by Josh at Friday, March 14, 2014 No comments:

Although the title of 13 Eerie does actually refer to something in the movie, it still comes off like one of those low-budget genre movies that added the number 13 to its title to make it seem more menacing (as I have mentioned before). Theoretically, the title is the designation for the plot of land where a forensic science professor (Michael Shanks) is conducting his final field exam for a group of six students. It's part of the grounds of abandoned penitentiary Eerie State, presumably the 13th sector in the area. The professor's exam involves strategically placing dead bodies in various places on the grounds, and then having his students examine them to determine the cause of death. I kind of doubt that real forensic science courses actually involve this sort of exam, although I suppose that if people donate their bodies to science, maybe they are okay with having them molested by forensic science students in a random field somewhere. I'm not entirely sure that these bodies were donated, though, since the professor's colleague tells him at the beginning of the movie that the exam better not take too long, because the bodies have to be returned to the morgue.

Whether it's realistic or not, it's kind of a clever setup for a zombie movie, which of course is completely botched. Wouldn't it be scary if the supposedly dead bodies that the students are working on suddenly came back to life and attacked? Yes, that would be scary, but that's not what happens here. Instead, there are some zombies just hanging around the area, apparently waiting for some students to show up so they can be eaten. The zombies are remnants of some vaguely defined experiments that occurred at the prison many years ago, before it was shut down. So they stalk the students while the asshole professor denies that anything weird is happening and orders the students to get back to work. Eventually after a couple of the students get zombified, the professor acknowledges that bad shit is going down, and he teams up with the students to run away from the zombies.

That's about all there is to this movie. The characters are less than one-dimensional, and the interesting setup dealing with forensic science is pretty much abandoned once the zombie attacks start (it's not like the students use their scientific knowledge to defeat the zombies, which would be interesting). The acting is serviceable, and the cast includes C-listers like scream queen Katharine Isabelle and former Roswell star Brendan Fehr. The effects are decent for a low-budget production, but there's nothing particularly creative or gruesome. The second half devolves into some rote running and fighting, and the ending is laughably abrupt. What starts out as somewhat creative quickly becomes generic and forgettable.
Posted by Josh at Thursday, March 13, 2014 No comments:

The business model for the so-called 10/90 shows (with a 10-episode first season followed by 90 more episodes over the course of about two years) like Tyler Perry's TBS sitcoms and FX's Anger Management emphasizes quantity over quality, so it's not surprising that FX's George Lopez vehicle Saint George, another 10/90 project, comes off like an assembly-line product. With its ugly, flat visual style, cheap-looking sets, abrasive laugh track, broad acting and hackneyed jokes, Saint George is as generic as sitcoms get, a little like the prefab reruns on TV Land, only not quite as appealing. 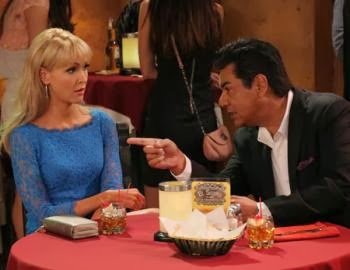 Lopez stars as what is basically a fictionalized version of himself (named George Lopez), of course, a semi-retired energy-drink mogul who's taken up teaching for reasons that are not explained in the pilot. He's recently divorced but still close with his ex-wife, who's a key member of the supporting cast along with his preteen son, his mother, his uncle and his cousin. They all exist pretty much solely to make jokes at George's expense, but it's not like George is much more of a well-rounded character than they are. He doesn't spend any time running his business and barely spends any time teaching, his relationship with his ex-wife seems friendly, and the worst he has to deal with are some harsh but loving words from his mother.

Although the supporting cast includes hardest-working man in straight-to-video movies Danny Trejo and veteran character actor David Zayas, the performances are all aimed at the cheap seats, augmented by an overbearing laugh track. The jokes are lame and obvious, and frequently sexist as well (a whole storyline in the first episode involves George's cousin texting random women pictures of his penis as some sort of dating strategy), especially when they focus on George's sexually voracious colleague. Lopez is more likable than Charlie Sheen, so Saint George isn't as painful to watch as Anger Management, but there's the same sense that everyone involved is just trying to churn out as much product as they can as quickly as possible so that they can get it over with.