I'm not certain exactly how many fighting men are in the 1960 Civil War drama 13 Fighting Men, or how they're meant to be counted, but either way I'm pretty sure there aren't 13 of them. There are fighting men on both sides of the North/South divide in this movie, which takes place just as the Civil War has ended and the two armies are no longer meant to be at odds (or at least not violently). Conveniently, the main characters find out about this development via a newspaper headline that reads "Civil War Over." That's indicative of the kind of bland, straightforward storytelling on display here, despite occasionally lively moments of interpersonal conflict.

A regiment of Union soldiers led by the upstanding Capt. John Forrest (Grant Williams) is escorting a U.S. Treasury agent and his literal box full of gold coins back to safe territory when the slimy Maj. Simon Boyd (Brad Dexter), leader of a rogue Confederate unit, finds out about the gold and decides he and his men should take it for themselves. The Union troops take shelter in a farmhouse, and most of the movie involves the Confederates laying siege to the house, determined to get the gold by any means necessary. The frontier siege and the conflict over a cache of gold make Fighting Men more like a Western than a war movie, and indeed the war is used mostly as background for a stodgy morality play. 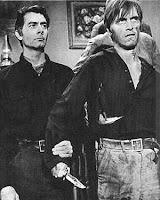 Boyd and his men aren't the only greedy ones, and Forrest faces betrayal and potential violence from some of his own men, as well as the residents of the farm, who find themselves caught in the middle of the battle. Screenwriters Robert Hammer and Jack W. Thomas find some nuance in the various motives of the characters, who aren't all just either selfish thieves or honorable patriots. The Treasury agent guarding the gold is a cold bureaucrat, more concerned about government property than about the lives of the soldiers, and the lady of the house, Mrs. Prescott (Carole Mathews) is a pragmatic schemer whose life has been destroyed by a war she had no part in. Boyd is a pretty one-dimensional villain, but his soldiers aren't just minions who fall in line. 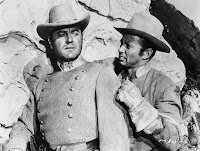 Mathews is good as the devious Mrs. Prescott, but the otherwise all-male cast is pretty stolid, and there isn't a lot of suspense or excitement in the lengthy stand-off. The movie runs only 69 minutes, but director Harry W. Gerstad still takes his time getting all the major players together, and the meatier drama doesn't really start until the second half. Even then, the threats never seem particularly dire, and the violence is all bloodless and brief. The moral issues of the war itself are never raised, and the characters' various positions on right and wrong play out in largely expected ways. Like the movie itself, they're just going through the motions.
Posted by Josh at Sunday, January 13, 2019 No comments: