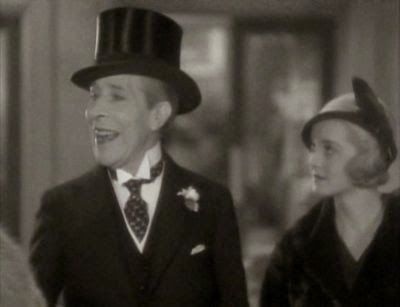 The last third or so of the movie shifts focus to the action referred to in the title, after Monty learns to read lips to compensate for his deafness. He discovers that he can use binoculars to read the lips of people across from his lavish apartment overlooking Central Park, and he finds a renewed appreciation for life in eavesdropping on people's private business and then anonymously meddling to make their lives better. Although he's doing good, he takes a sort of perverse pleasure in "playing God" to the less fortunate (in addition to being a brilliant pianist, Monty is also a fabulously wealthy heir). I guess this is meant to be a redemptive story about the power of faith, but it ends up being more about the power of entitlement. Even the resolution of Monty and Grace's courtship hinges on his pathological eavesdropping, when he discovers that she has a more age-appropriate love interest. The absurdly self-sacrificing Grace is determined to marry Monty out of some misguided sense of duty, but, rich-old-guy saint that he is, he lets her off the hook. Monty ends the movie rejuvenated by his role as a benevolent busybody and able to finally play music again, but, like the movie as a whole, it doesn't feel like much of a triumph.
Posted by Josh at Monday, August 24, 2015 No comments:

There is some weird stuff lurking in the world of straight-to-video kids movies, like the apparently quite popular Monster High series of animated movies, which are essentially feature-length commercials for Mattel's line of dolls. Basically goth versions of Barbie, the dolls combine monster traits (vampires, werewolves, Frankenstein's monster, etc.) with skimpy outfits, heavy makeup and high heels. They are, of course, marketed at tween girls. The Monster High world includes various merchandise, video games, books and web series in addition to the movies, and watching 13 Wishes (the second full-length movie in the series) gave me only a brief glimpse into this bizarre world.

13 Wishes actually got a two-day event-style theatrical release in the U.K., but it's clearly tailored to the home video market and especially to the non-discerning tastes of kids who will buy anything associated with their favorite brand. The ugly computer animation looks like it came from a mobile-phone game, the voice acting is perfunctory, and the muddled story delivers simplistic lessons while barely managing to drag its plot out over 73 tedious minutes. At the same time, it's bright and cheerful and largely inoffensive, at least if you can get past the overly sexualized looks of the teenage female characters. Looks aside, their behavior is wholesome and positive, and the movie emphasizes friendship, acceptance and selflessness.

The story involves Monster High freshmonster Howleen Wolf discovering a magic lamp and releasing a genie, who then grants her 13 wishes (which kind of seems like a lot, but it allows me to include this masterpiece in my ongoing series of posts, so I'll accept it). The genie (named Gigi) has a sort of evil twin, a shadow creature called Whisp who tries to influence Howleen to make selfish choices with her wishes and eventually wish Whisp into ultimate power so she can rule the world (or something). The plot is both convoluted and inconsequential, and seems to exist mainly to send the various characters into different dimensions so they can wear new outfits that can then be made into dolls that Mattel will sell (obviously the primary goal of these movies).

Despite all being based on different monsters, the female characters are fairly interchangeable; they all have the same basic body type and facial expressions, just with different color skin and outfits. Some of them have inexplicably exaggerated accents (Howleen and her sister sound like they come from the Bronx, and a sea monster character has an Australian accent), but otherwise they speak in the same teen-girl cadence. The humor is pretty bland (although I did catch and appreciate a Heathers reference) and the moral of the story is predictable, as Howleen learns to appreciate what she has and that wishing isn't a shortcut to a better life, etc. As toy commercials that contribute to the objectification of young women go, 13 Wishes could certainly be worse.
Posted by Josh at Thursday, August 13, 2015 No comments: