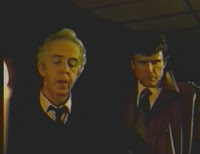 Like 13teen, Last Stop on 13th Street is a cheapo B-movie slapped with a new title featuring the number 13 to make it sound more ominous. To be fair, it was originally released as Alien Zone, which is a far more nonsensical title, since there are no aliens anywhere in the movie (it's also known in some releases as The House of the Dead, which is by far the most accurate title), and there is at least a street (never indicated as 13th Street, though), at which one of the movie's main characters makes a last stop. But the title really has nothing to do with the plot, which features a philandering salesman making a wrong turn and ending up taken in by a charmingly sinister mortician (Ivor Francis, giving the movie's most effective performance). 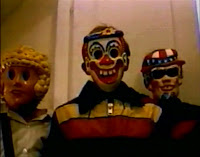 The movie then turns into a sort of second-rate Twilight Zone or Tales From the Crypt, as the mortician takes the salesman through his parlor, opening a series of four coffins and telling stories about the inhabitants of each. The stories are pretty half-baked: A shrill teacher is murdered by some sort of child-monsters; a creepy guy films himself seducing/murdering women (featuring the least convincing onscreen strangulation I've ever seen), then gets caught; two master detectives entertain a deadly rivalry; and a callous businessman is tortured by unseen forces. 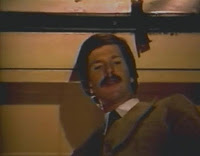 The detective story at least has a pair of fun performances and a satisfying (if painfully predictable) ending, and I could see it actually being a lesser episode of one of the shows the movie is copying. The rest of the stories are poorly paced and completely ineffective at creating suspense, and the framing sequence ends with the obvious twist that the adulterer is now the mortician's latest victim. The version of the movie I saw via Amazon Instant (obviously ripped from an old VHS tape, complete with tracking problems and murky, degraded image) is only 77 minutes long, and IMDb claims that there's a 100-minute cut out there somewhere, which might alleviate some of the choppiness, but is unlikely to improve the tedious plotting, lackluster acting and ugly visuals.
Posted by Josh at Wednesday, March 13, 2013 No comments: