Japanese animation is one of my serious movie blind spots; I've seen only a handful of movies (three, I think, counting this one), and I find much of the style off-putting, although I realize it's unfair to generalize an entire varied genre that way. The point being, I may not really know what I'm talking about here, and seasoned anime fans could probably offer up better context for The Professional: Golgo 13, the first animated feature based on popular, long-running Japanese comics character Golgo 13 (aka Duke Togo).

Golgo 13 comics have been published continuously since 1969, and the character was adapted into two live-action movies (in 1973 and 1977) before this, as well as a later direct-to-video animated special and an animated series in 2008. I remember first hearing about the character thanks to the 1988 Golgo 13 video game for the original NES, but I don't think I knew much about him. Not that there's really that much to know: Golgo 13 is a mysterious assassin-for-hire whose nationality, age and real name are unknown. At least in this movie, he's essentially invincible and infallible, never missing his targets and never getting killed or more than lightly injured, despite being shot at by dozens of trained killers, caught in explosions and thrown from moving vehicles.

He also rarely speaks and never changes his grim facial expression, even while being surrounded by attackers or having sex with beautiful women (possibly the funniest moment in the movie occurs when some random hottie is writhing in ecstasy on top of Duke, and he just lies there, completely stoic). It all makes him into a completely uninteresting character, so the movie has to rely on the various villains, sex partners and hangers-on for its meager character development. The story is episodic in the movie's first half, but eventually ties together when Duke finds himself on the run from a cabal of CIA, FBI and military forces hired by an ultra-wealthy industrialist to take him out. Since he might as well be a superhero, things don't really go as planned for the bad guys.

Golgo 13 is full of anime's visual trademarks, including speed lines, abstract action sequences, split screens and static backgrounds. It also has one of the earliest uses of computer-generated animation, which as expected looks awkward and stiff. To me, the movie is hokey and laughable (the horrendous smooth-jazz score is particularly egregious), but some fans at least seem to regard it as an anime classic. With its insanely over-the-top violence and sex, overwrought dialogue and hammy acting (from the drawings as well as the voices), it's really just another artifact of '80s movie excess.
Posted by Josh at Sunday, January 13, 2013 No comments: 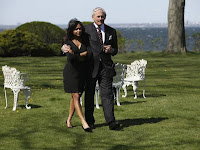 At the end of each of the last few years, I've posted a list of my favorite movies from other years that I saw for the first time during that year (here are my lists from 2011, 2010, 2009 and 2008), but for various reasons (mostly an increase in non-movie-related writing assignments), I didn't see as many older movies this year as I have in recent years. So rather than fill out a list with movies I wasn't that enthused about, here instead is a shortened list of my top six non-2012 movies that I saw for the first time in 2012.

1. Bonjour Tristesse (Otto Preminger, 1958) Thank goodness for the TCM Classic Film Festival, at which I saw three of the movies on this list, including this wonderful unheralded masterpiece from Preminger, a filmmaker with a long, eclectic career spanning thrillers (Laura, Anatomy of a Murder), musicals (Carmen Jones, Porgy and Bess), romances (Forever Amber, Daisy Kenyon) and social-issue dramas (The Man With the Golden Arm, Advise & Consent). Bonjour Tristesse is none of those, although it is at times thrilling, romantic and socially relevant, all while maintaining a completely unique and surprising tone. Jean Seberg is delightful as a flighty young woman who both wants to rebel against her playboy father (David Niven) and keep him all to herself. Preminger mixes a breezy, adventurous sensibility with a core of real heartbreak and loss.

2. Cry Danger (Robert Parrish, 1951) Another discovery from TCM Fest, this clever, well-written noir both embraces and subverts familiar genre elements, including the femme fatale and the convoluted double-crossing. A passion project for star Dick Powell, it showcases him at his best playing a sardonic criminal looking to recover some money owed to him, a seemingly simple task which naturally spirals out of control. Rhonda Fleming is also very entertaining as the love interest/obstacle, and the movie skillfully integrates dry wit with genuine menace. Read more in my review.

3. Girl Shy (Fred C. Newmeyer and Sam Taylor, 1924) One more selection from TCM Fest, this one a silent comedy starring Harold Lloyd, who often ends up being an afterthought compared to Charlie Chaplin and Buster Keaton. But to be honest I enjoyed this more than any Keaton or Chaplin movie I've seen (which is admittedly not that many), finding it creative and heartfelt and genuinely funny in a way that those other movies just haven't been for me. Lloyd stages some amazing set pieces (including a mind-boggling car chase), but he also does a great job of developing a believable tragic character within the context of the over-the-top comedy.

4. Rampart (Oren Moverman, 2011) Every year I end up spending a bunch of time in January and February catching up on some notable end-of-year releases from the previous year, and this is one acclaimed 2011 movie that I didn't end up seeing until it opened in Vegas in March. The film itself can be a little unfocused, but Woody Harrelson's performance as a conflicted corrupt cop is excellent, and I like how Moverman is more concerned with character study than with procedural details, despite the story's basis in a real-life scandal. Read more in my review.

5. Ben-Hur (William Wyler, 1959) I appreciate when theater chains and companies like Fathom Events hold special screenings of older films on big screens, and I always mean to attend more of them (they often fall on evenings when I have to attend press screenings). This is one of the few I managed to make it to this year, and seeing this movie in a theater (actually on the oversized XD screen at the Cinemark South Point here in Vegas) was a really impressive experience. This is pretty much the definition of epic filmmaking, and Wyler conveys the scope and grandeur of the story in a way that I'm not sure anyone can anymore. Even with all the advances in modern special effects, the chariot-race sequence in this film is still one of the most astonishing things I've ever seen onscreen. The sheer scale of the movie can get exhausting, and I found the insistent, overt preaching at the end a little frustrating, but overall this is a pretty amazing cinematic achievement.

6. The Lady Eve (Preston Sturges, 1941) This is the third time I've had a Sturges movie on this list (I listed The Palm Beach Story in 2010 and Sullivan's Travels in 2008), and I'm repeatedly amazed at his cleverness and creativity, especially within the confines of Hollywood studio movies in the 1940s. The plot twists in the movie, featuring Barbara Stanwyck as a con artist with whom Henry Fonda falls repeatedly in love, are completely outlandish, but Sturges commits to them in such a wholehearted way that they feel almost natural. That's his consistent skill: Telling stories that are completely unpredictable and surprising, yet hold together remarkably from moment to moment. The Lady Eve is easily up there with his best work.

Honorable mention to two movies that I saw this year for the second time but enjoyed much more than I had initially: Josie and the Pussycats (Harry Elfont and Deborah Kaplan, 2001), which is even more incisive and amusing in its music-biz satire now than it was a decade ago; and The Exorcist (William Friedkin, 1973), which probably suffered from heightened expectations the first time I saw it, but which really impressed me years later (on the big screen, like Ben-Hur), with the intensity of its emotional drama and the seriousness of its religious inquiry (plus Linda Blair's amazing performance).
Posted by Josh at Wednesday, January 02, 2013 No comments: