Triskaidekaphilia: 'Thirteen Conversations About One Thing' (2001)

Although it's probably one of the better-known movies with the number 13 in its title, I've been putting off watching Thirteen Conversations About One Thing since I first started this project nearly six years ago. I've watched plenty of obscure and awful low-budget movies before getting to this generally well-respected indie drama, because I remember disliking it so much when I first saw it, probably soon after it was released on home video. At that time, it was a critically acclaimed Sundance favorite that I was eager to see, and I came away seriously disappointed. I thought that maybe this time, with the expectation that I would find the movie irritating and pretentious, I might be pleasantly surprised. But no, I had pretty much the same reaction as last time. This is a self-important bit of meaningless nonsense, featuring good actors struggling with schematic, mannered writing.

The one moment I remembered clearly from my first time watching this movie was tortured attorney Troy (Matthew McConaughey) repeatedly reopening a cut on his forehead as a sort of penance for the hit-and-run car accident that caused it. It's an apt metaphor for director and co-writer Jill Sprecher's film, which obsessively picks at and reopens the same thematic wounds over the course of its running time. As the title implies, the movie focuses on characters discussing the same basic issues over and over again, although the "one thing" is never directly specified. It's something like fate or chance or happenstance, with Sprecher interweaving the stories of four New Yorkers dealing with existential crises. There's Troy the lawyer, who boasts about putting bad guys behind bars but then runs like a coward when he accidentally hits a woman with his car; there's college professor Walker (John Turturro), who feels unsettled after a mugging and is having an affair with a colleague; there's Gene (Alan Arkin), a middle manager at an insurance company and a curmudgeonly pessimist; and there's Bea (Clea DuVall), a sunny, optimistic housekeeper whose attitude changes after she's hit by a car (driven by Troy). 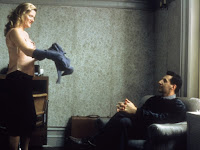 All of their stories are heavy and overwrought (the final act includes two suicide attempts, one successful and one not), and every character speaks in a series of parables and proverbs that they have ready for seemingly any occasion (it's no surprise that Sprecher was a philosophy major in college). It's a showy demonstration of shallow philosophical ideas, with heavy-handed bits of symbolism (Walker, a physics professor, writes "irreversible" in big block letters on his classroom chalk board, after we see characters making life-altering decisions). The characters are more like archetypes of human behavior than real people, and the actors have trouble making them feel like more than academic exercises (although Arkin comes close). The cloying score and the rigid visual style, with transitions that always over-emphasize the symbolism, create this oppressively self-important tone that the story just can't back up. Its philosophy never graduates beyond freshman level.
Posted by Josh at Friday, November 13, 2015 No comments: