Other than DC Comics superheroes, the biggest trend in network TV this fall is romantic comedy, and ABC is premiering its two entries in the genre back to back tonight. Neither show is successful, although they fail for opposite reasons: Manhattan Love Story is as generic as its title suggests, a cardboard romance between two boring people whose entire personalities are built out of gender stereotypes; Selfie is a sitcom interpretation of My Fair Lady focused on modern social-media addiction, an overloaded high concept that trips on its own ambition.

Both shows star appealing actors who could be perfect for more genuine romances, but struggle to make the most of the material they're given. In Manhattan Love Story, the gimmick is that the audience can hear the inner thoughts of the main characters, but that just amounts to a lot of cliched narration about what men and women supposedly like, and stars Analeigh Tipton and Jake McDorman are stuck regurgitating stale ideas about horny dudes and shopping-obsessed ladies. When they are able to interact without the intrusive and reductive voiceover, their relationship is a little sweet, but it's also pretty dull. There's minimal entertainment in the background elements, which are mostly made up of slightly updated sitcom tropes about living in New York City. This is the kind of show that no one will remember when it gets canceled after airing half a season.

Selfie, on the other hand, is memorable, even if only for its sometimes cringe-inducing comedic set pieces, especially the opening bit involving copious amounts of vomit. Star Karen Gillan has incredible range, going from Doctor Who companion Amy Pond to grim alien warrior Nebula in Guardians of the Galaxy to unhinged horror-movie heroine in Oculus, and she shows yet another side of her talents as self-obsessed, self-loathing social-media addict Eliza Dooley. Gillan really commits to her performance, but that means that Eliza is so cartoonish and grating that it's hard to enjoy spending time with her. John Cho is much more low-key as the Henry Higgins analog, but he's also off-putting in how fussy and dour he can be. Unlike Manhattan Love Story, Selfie doesn't feature any actual romance in its first episode, and while the characters do have chemistry, it's also hard to imagine them ending up in a convincing relationship. Its quirky style makes it more likely to find an audience right away, but Selfie will have to tone down its excesses if it wants to sell viewers on a love story between the main characters.

'The Mysteries of Laura'

Did you know that a human woman can be both a mother and a competent professional? The Mysteries of Laura treats this like an earth-shattering revelation, which is emblematic of its shrill, condescending tone in presenting what should be a simple police procedural. Debra Messing plays the title character, that apparently freakish creature who both raises children and holds down a job in which she actually knows what she's doing. The pilot starts out with no mention of Laura's children, and then introduces them with a bit of infuriatingly contrived misdirection: Laura gets an emergency call to a school, where she comes upon what appears to be a grisly crime scene. Surprise, it's actually a mess created by her unruly sons! How wacky, that this woman deals with dangerous criminals and her rambunctious children in the same no-nonsense way!

The central mystery in the first episode is nothing special, but it's not egregiously terrible, either (although it does somewhat annoyingly dispatch with a character who appeared to be part of the main cast). The problem with The Mysteries of Laura is in all the elements that should set a procedural apart: the characters, the dialogue, the performances. Messing is annoying and whiny as this caricature of a career woman, and Josh Lucas is patronizingly smarmy as her ex-husband-to-be, who comes off as insensitive when he's meant to be charming. Their supposedly cute parenting tactics often come off as creepy, and their banter is grating rather than endearing. The episode ends with an idiotic twist that reduces Laura even further to a gender stereotype, just in case you thought the show was going to respect her professional abilities. A show with this little respect for its star, its main character and its audience doesn't deserve any respect in return.

The supporting cast of 2:13 includes Jere Burns, Teri Polo, Kevin Pollak, Mark Pellegrino and Dwight Yoakam. So why is some guy named Mark Thompson the star of the movie? If you're unfamiliar with the long-running Los Angeles morning radio duo Mark and Brian, you may be completely baffled by how this Thompson guy managed to get a movie made of his terrible screenplay, starring himself, with a bunch of competent, recognizable actors in the supporting roles. But Thompson (who is also an executive producer, along with his wife) is an LA radio icon and certainly quite wealthy, even if he and his partner Brian Phelps never quite achieved the national fame of people like Howard Stern and Opie & Anthony (they were syndicated for a while and had a short-lived TV show in the '90s).

So if Thompson wanted to write and star in a low-budget thriller, he undoubtedly had the money to bankroll it himself, hire a director (Charles Adelman) whose filmography consists primarily of bikini-model videos and convince solid working actors to take jobs acting opposite him and pretending he's remotely in their league. It's the definition of a vanity project, and not surprisingly it did not lead to a thriving movie career for Thompson (who has no subsequent movie or TV credits). Although I remember listening to the Mark and Brian show while growing up in Southern California, I didn't connect the two until after I finished watching the movie, and I spent the whole time trying to solve a much greater mystery than who was killing people and covering them in creepy masks: the mystery of how the hell Mark Thompson managed to become the star of this movie.

Because while Thompson's screenplay for 2:13 is terrible, it's really not that much more terrible than screenplays for dozens of other straight-to-video crime thrillers. With another actor in the lead role, 2:13 might have been slightly more tolerable, or at least less inadvertently hilarious. But Thompson overplays his cliched burned-out cop on the edge so excessively that every one of his actions becomes like a parody of a hard-boiled detective. Poor Teri Polo deserves hazard pay for having to pretend to be overwhelmingly attracted to this smug shlub, and their post-sex cuddling is some of the most awkward intimacy I've ever seen in a movie (thankfully the movie skips over the actual sex).

Thompson's Detective Russell Spivey is your basic tortured maverick who doesn't play by the rules, dealing with buried childhood trauma while tracking a serial killer who arranges his victims in ritualistic scenes complete with hand-painted masks. It's mostly standard-issue serial-killer stuff, all grim and ornate and pointless, complete with an overwrought backstory and predictable (yet also nonsensical) twist ending. Spivey is supposed to be some kind of master profiler, but he's prone to keen observations like "Emotions aren't possible without feelings," and he makes numerous dubious logical leaps in his efforts to capture the killer. (Even the title is part of that, since it refers to the time at which the killer always does something that turns out to not really be related to the murders.)

Despite his supposed keen psychological acumen, he's consistently stymied by the efforts of the therapist (Pollak) he's required to see following an on-duty mental breakdown. Those scenes are some of the movie's worst, with repetitive banter (Spivey's catch phrase is a sarcastic "Match?" when he tries to smoke a cigarette even though he knows it's not allowed) and a totally far-fetched hypnosis scene that of course sets the stage for the idiotic ending.

Since Thompson seems to have spent the entire budget on hiring semi-famous actors, the whole movie looks dingy and cheap, shot on unconvincing sets and locations and given a grimy visual style that's probably meant to make it look intense and brooding. Adelman may be great at shooting women in bikinis, but he can't do anything to improve Thompson's awful writing and even worse acting. Every time a new familiar face popped up, I felt bad for them for having been convinced to participate in this debacle. I'm sure the behind-the-scenes story of the radio DJ's vanity project, if it ever gets told, would be a lot more interesting than the movie itself.
Posted by Josh at Saturday, September 13, 2014 No comments: 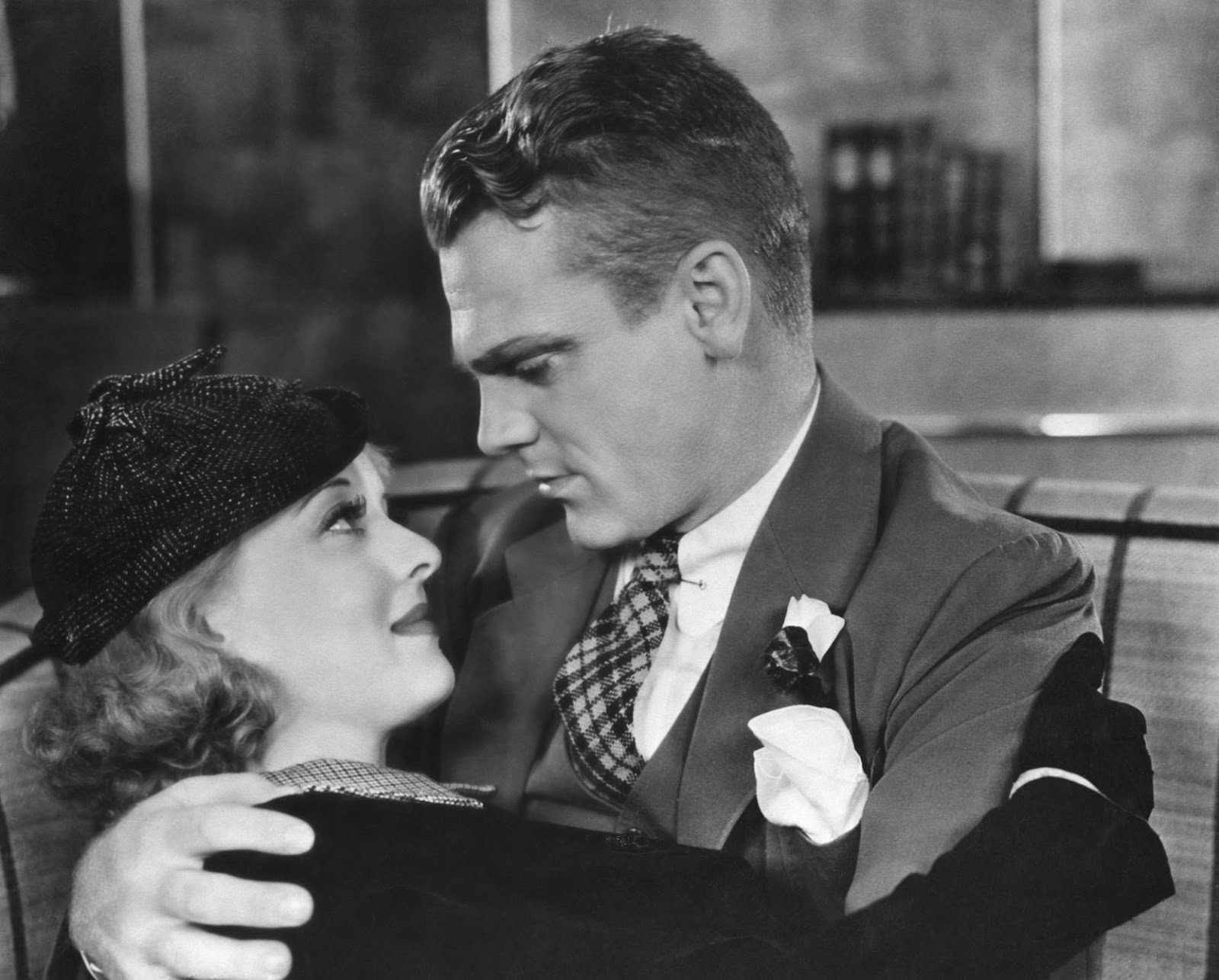 The title character of Jimmy the Gent is, of course, no gentleman, but I found it a little tough to take him as the charming rogue he's clearly meant to be. As Jimmy, James Cagney lays on his tough-guy accent so think that it's often hard to understand him, delivering every line with over-the-top smarminess and sleaze. At first he seems like the movie's antagonist, an unscrupulous businessman who tracks down unclaimed inheritances and directs them to their proper recipients, taking a healthy commission along the way, and not worrying too much if the money is actually going to the right person. Davis plays Joan, his former associate and former girlfriend, who now works for a more distinguished competitor, and is trying to distance herself from her criminal past. 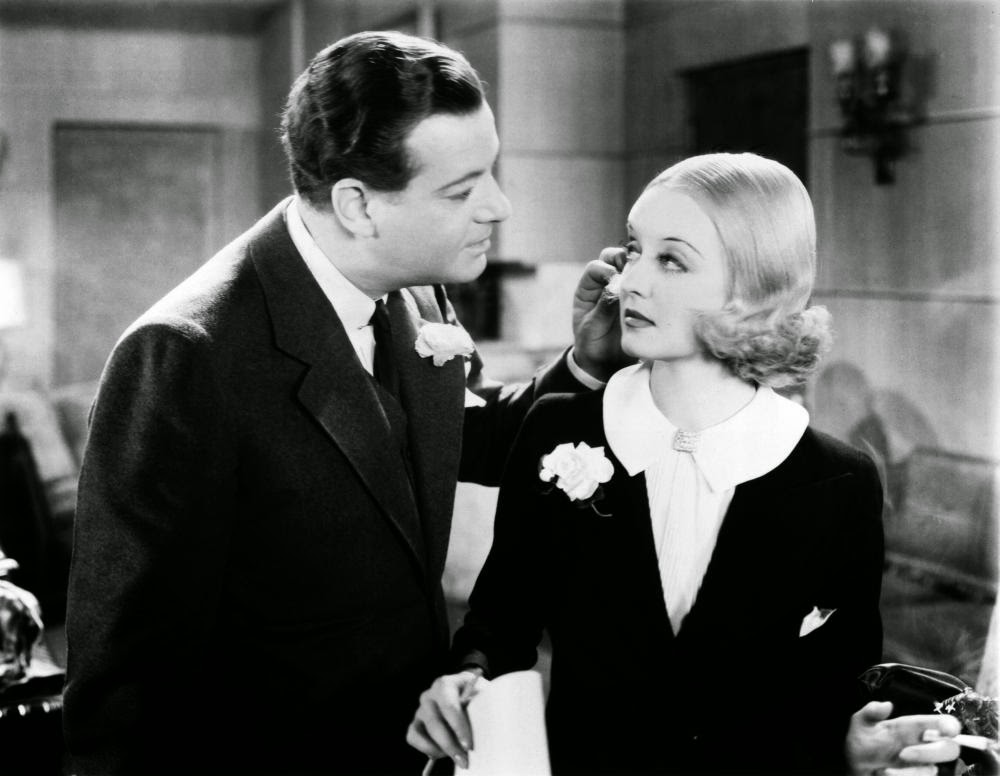 Jimmy engages in every underhanded tactic he can think of to steal Joan back from her new employer (who soon becomes her new paramour as well), including launching an extremely convoluted scheme to claim an inheritance on behalf of a man who's wanted for murder (it involves several quickie wedding ceremonies). Jimmy's slimeball persistence is neither funny nor endearing, and Davis' typical sharp-tongued, no-nonsense presence makes Joan into someone who obviously shouldn't take any of this guy's shit. Her new beau turns out not to be much better, but Jimmy's scheme to expose his rival is hardly ethical or selfless, and when he takes Joan back in his arms at the end of the movie, it's only as the result of more illegal activity. 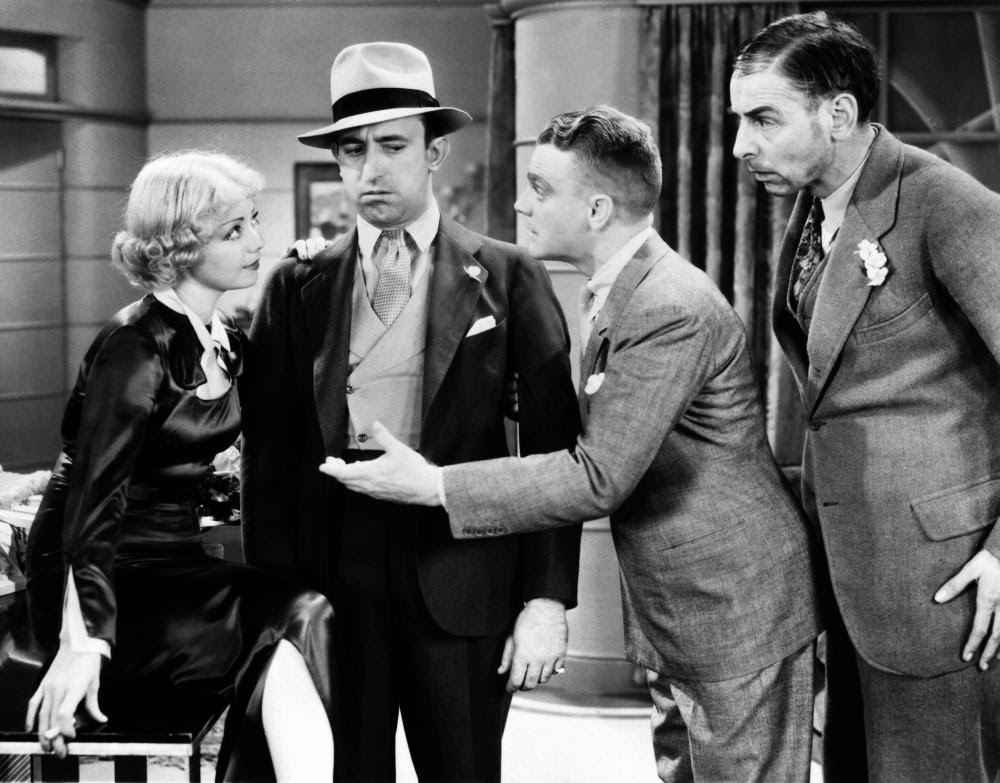 The retrograde gender politics of movies from the '30s are not exactly unexpected, and I'd be more forgiving if the rest of the movie were more entertaining or funny. But the plot is so haphazard and convoluted that it's distracting, and the humor is manic and broad (although I did like Alice White as Jimmy's dim-witted but chipper accomplice). Jimmy and his rival go to great lengths to sabotage each other while Joan, clearly smarter than either of them, ends up a pawn in their schemes. At the end, the winner takes the prize, another woman reduced to a trophy for men to fight over.
Posted by Josh at Tuesday, September 02, 2014 No comments: