Virtually no one watched last year's underrated (if uneven) FX animated series Unsupervised, so people probably won't notice how much it has in common with the new IFC animated series Out There. Although both shows have the familiar structure of dumb, vulgar animated comedies, both shows soon reveal themselves as something more thoughtful and true, more interested in the painful peculiarities of being a teen outcast than in crafting lame gross-out jokes.

Like Unsupervised, Out There focuses on a pair of teen misfits who team up against the world, two best friends who bond together almost out of desperation. Out There's Chad and Chris are more typical sullen teenage outcasts (as opposed to the relentlessly positive protagonists of Unsupervised), with crushes on girls and dreams of running away and frustrating parents who don't understand them. The actual plotting of the show isn't particularly groundbreaking, but creator Ryan Quincy has a distinctive personal perspective (much of the show is autobiographical) that shines through, especially in his narration and voicing of main character Chad.

Also like Unsupervised, Out There isn't actually all that funny, but while it does have jokes, it's also built around a sense of melancholy that pervades even the silliest moments. Quincy's narration has a literary quality that feels almost like a reading of a decent short story or personal essay, and there's a real sadness to the characters' efforts to look cool or escape their boring small town or impress a pretty girl. Visually, the characters look like sort of animal/human hybrids (Chad and his brother and father resemble relatives of Cousin Itt), but their behavior is completely grounded and realistic. Out There isn't brilliant -- it has plenty of clumsy moments and jokes that fall flat -- but it has a unique voice that deserves to find more of an audience than Unsupervised did.

I don't follow sports at all, but I find Shaquille O'Neal kind of fascinating because he's clearly so desperate to be an entertainer. While he was in the NBA, he took time out to star in terrible movies (Steel, Kazaam), record terrible albums (Shaq Diesel, Shaq Fu) and host terrible reality shows (Shaq's Big Challenge, Shaq Vs.). Now that he's retired from basketball, he's able to devote all of his time to pursuing his misguided goal of becoming America's most beloved seven-foot-tall TV personality.

The latest chapter in this ongoing effort is Upload With Shaquille O'Neal, a Tru TV show that's basically Shaq hosting America's Funniest Home Videos. Although the format is similar to Tosh.0 or MTV's Ridiculousness in that it features videos culled from the internet, the videos themselves are the exact same kind of thing you'd see on AFV, primarily focused on people falling down and/or hurting themselves comedically. It's no surprise, since AFV executive producer Vin di Bona is also behind Upload, and the format, with its family-friendly humor, "clip of the week" and slick announcer (I swear it's the same guy), is basically a copy of AFV.

As for Shaq himself, he's propped up by comedians Godfrey and Gary Owen as co-hosts, so he mostly sits there and laughs at the clips, and occasionally reads some corny jokes. He also stars in some lame sketches in between videos, which are about as clever as, well, Bob Saget's voiceovers on AFV. This is the kind of show you could watch with your entire family without worrying that anyone will be offended (or more than mildly entertained), and like AFV, it could run for years without anyone noticing. Wearing a sweater vest and delivering puns, Shaq has successfully transformed himself into Bob Saget circa 1992, and you get the impression he couldn't be happier about it.

In the last few weeks, we've had one terrible new network drama (The Following) about an insidious cult of serial killers, and another terrible new network drama (Zero Hour) about a convoluted, wide-ranging conspiracy. The CW's new drama Cult combines both of these misguided concepts into one series, and then adds in an evil television show for good measure. Creator Rockne S. O'Bannon (Farscape) has a decent reputation in genre TV, but the first episode of Cult is an incoherent mess, as laughably confused as Zero Hour and nearly as unpleasantly grim as The Following.

The idea is that a creepy TV show (which airs on The CW, of course) is somehow inspiring its most rabid fans to commit violent acts as directed by the main villain on the show. Or at least that's what seems to be happening, since the pilot is all about vague ominous hints and very few concrete details about what's going on. A disgraced reporter (Matthew Davis) whose brother has gone missing after investigating the show teams up with one of the show's researchers (Jessica Lucas) to dig into the mysterious activities of the fans, and they discover ... something sinister, although it's not exactly clear what that is.

Cult fails pretty miserably at creating a sense of danger and menace, exemplified by the "creepy" catch phrase that victims both on the show and in the real world utter just before dying ("Well hey, these things just snap right off"). All of the suspense is hilariously overwrought and completely unconvincing, and while there's a hint of campy satire in the portrayal of the network executive trying to give the show's reclusive-genius creator notes, Cult doesn't really have a coherent perspective on TV fandom or serialized genre entertainment. You'd think a genre TV show looking to engender a cult following would be good at representing a genre TV show with a cult following, but the show-within-the-show rings false. Thus we're left with the dour, incoherent mystery, which offers no enticement to tune in again. It's doubtful Cult will inspire its fans to do anything more drastic than change the channel.

According to Wikipedia, Z-grade filmmaker David DeCoteau has made more than 90 feature films in the past 25 years, and his latest assembly-line brand is the 1313 series, quickie straight-to-video "thrillers" marketed to a gay male audience despite containing no actual gay content whatsoever. Instead, these movies, all of which run less than 80 minutes and many of which were apparently shot in the same prefab mansion, feature shirtless young hunks wandering around aimlessly, working out, swimming and occasionally stumbling across something resembling a plot. There's no sex or even kissing, and no nudity beyond the kind of shirtlessness you could find in an Abercrombie & Fitch catalog.

Despite my dedication to this ongoing project, I have no intention of watching more than one of these 1313 movies, which by all accounts are interchangeable. So I picked what may be the first one (it's hard to tell, since DeCoteau churns them out so quickly), Actor Slash Model, which is at least a somewhat clever title for the story of a disgruntled actor murdering the pretty-boy models who keep getting the parts he wants. But as indicated above, the movie spends maybe 10-15 minutes on the actual plot, which boils down to the killer wandering around the empty mansion and killing vapid hunks one by one. DeCoteau is so focused on beefcake that he doesn't even bother delivering any thrills; the killer carries around what looks like a small kitchen knife, and each murder scene cuts away before we can see the actual stabbing. The knife is always clean afterward; it's as if the production didn't even have the budget for some fake blood and a prop knife.

DeCoteau's idea of suspense is to blare loud, "ominous" music over endless scenes of actors slowly walking through the empty house, calling out "Hello?" over and over again (these scenes go on for literally three or four minutes at a time). The actors are good-looking in a generic way, but, perhaps in an inadvertent nod to the plot, give terrible performances, and some can't even keep the other character names straight between scenes (DeCoteau's other "suspense" technique of replaying previous dialogue over the lengthy walking scenes ends up repeating one particularly egregious name mix-up over and over again).

I guess these movies must be some sort of success with gay viewers, because DeCoteau has made at least 14 of them (again, according to Wikipedia), but to me they seem insulting and condescending. DeCoteau panders to his audience by showcasing shirtless hunks, but then backs off from any themes or dialogue or plot points that might be relevant to the people he's supposedly trying to reach. I'm sure he'd defend his work as harmless fluff, but it's really just tedious nonsense, and anyone looking to ogle shirtless dudes can find numerous better ways to do so.
Posted by Josh at Wednesday, February 13, 2013 No comments: 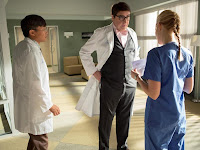 I don't trust David E. Kelley. It seems that no matter how his shows start out, they eventually devolve into the same Kelley formula of absurd twists, overly quirky characters and heavy-handed speechifying. His new medical drama Monday Mornings seems pretty subdued in its first three episodes, at least compared to the later years of shows like Ally McBeal and Boston Legal (the two Kelley shows I followed most closely), but it definitely has some of the Kelley warning signs. There are little character quirks that start to become more prominent (one doctor has a habit of swaying back and forth on his squeaky sneakers when nervous, a tic that director Bill D'Elia, a longtime Kelley collaborator, always shoots in close-up), and there is plenty of melodramatic grandstanding, which is pretty much built into the show's concept.

The title refers to meetings/inquisitions held by the chief of staff at the show's fictional Chelsea General Hospital in Portland, Oregon, at which he dresses down doctors for their various failings during the previous week. This gives Alfred Molina, as the chief of staff, the chance to deliver at least one self-righteous monologue per episode, and the actors playing the other doctors rotate their own impassioned speeches depending on the storyline. There's a lot of overwrought emoting from patients and doctors, which D'Elia highlights with showy camerawork, and the interpersonal drama is pretty underdeveloped. 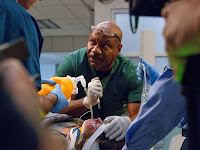 When the show isn't displaying Kelley's worst tendencies, it's a generic medical drama, with life-or-death cases, heartbreaking surgical complications and miracle diagnoses. I have a pretty low tolerance for that sort of thing, but fans of medical dramas may find something appealing in Mornings' various cases-of-the-week. Kelley has also assembled an impressive cast, including Molina, Ving Rhames, Jennifer Finnigan and Jamie Bamber, and there's an admirable diversity in the casting. But that can't make up for the problems with the writing and directing, and Kelley is probably just going to squander the show's strengths by the end of the season anyway.