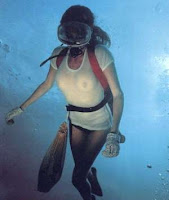 Thanks to the massive success of Jaws in 1975, novelist Peter Benchley became a hot commodity, and his second book, The Deep, was made into a movie two years later, with Benchley co-writing the screenplay. The Deep features Benchley trying to branch out from shark attacks into other sorts of undersea thrills, but he's better at creating an implacable, nonverbal menace than he is at putting together an exciting story about human beings. It probably doesn't help that The Deep's journeyman director Peter Yates is no Steven Spielberg. Still, there's some decent stuff in The Deep, primarily in the impressive underwater cinematography, and it features a very attractive Jacqueline Bisset in an essentially see-through wet T-shirt for the first 10 minutes of the movie, which was credited with much of the movie's box office success.

There's very little shark action going on here, though -- far less than I expected when I picked it for this project. Other than a few brief glimpses, the entire shark-related portion of the movie is limited to one scene. Bisset and Nick Nolte play a pair of tourists in Bermuda who stumble on the wreckage of a sunken World War II ship while diving. Amid the more recent debris are artifacts from an 18th-century Spanish royal cargo shipment, and the two amateurs hit up a local history and salvage expert (Robert Shaw, another Jaws connection) to learn about what they've discovered. Unfortunately for them, the WWII ship is full of thousands of vials of morphine that an unscrupulous soldier (Eli Wallach) was smuggling at the time, and a local drug lord (Louis Gossett Jr.) is eager to get his hands on them. 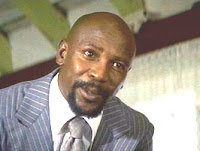 The drug lord tries to sabotage our heroes' efforts to get to the treasure, which is where the sharks come in: At one point his henchmen whip a bunch of sharks into a frenzy by chumming the water above where the divers are working, and there's a sort of swarm of sharks that's menacing at first but doesn't really amount to anything. Far more impressive is the giant moray eel that attacks from out of nowhere and, in the climactic battle, literally bites the drug dealer's head off. There's not much excitement elsewhere in the dull story, which plods along through a rote investigation into the origins of the treasure. The dive sequences, including the wordless eight-minute opening, are impressive, although more for the way they look than for any success at creating suspense. Benchley's career as a Hollywood hitmaker fizzled after The Deep (although he continued writing moderately successful books), and it's not hard to see why.
Posted by Josh at Sunday, July 31, 2011 No comments:

Back in 2008, the first little theme project I ever did for this blog was Shark Week, in which I wrote about seven shark-related movies over the course of a week coinciding with Discovery's much-loved event of the same name. I picked that theme for a week because I didn't think there was really enough content to sustain for much longer than that, at least not without covering a bunch of redundant shark-attack B-movies that are essentially all the same. Well, three years later I decided it was a theme worth revisiting -- not all shark-attack B-movies are the same, and I found a few that seemed intriguing to write about, along with some other shark-related oddities.

So once again I'm honoring the week about actual sharks with a week about movie sharks, and since last time culminated with Jaws, this time of course will culminate with the slightly less classic Jaws 2. Posting will start later today and go through August 6; in the meantime, check out the pieces from the original Shark Week:

The 1948 cheapo thriller Highway 13 comes on DVD as part of the Forgotten Noir series, and it seems pretty justifiably forgotten. Barely qualifying as a feature at just an hour long, it's a bare-bones tale of corruption and sabotage marked by clumsy writing, terrible set design and special effects, listless acting and rushed pacing. There's a certain sleazy charm to these anonymous programmers, and occasionally some of them exhibit flashes of real artistry (there's a reason a movie like Detour has become a classic). Highway 13 definitely doesn't fall into that category, though. 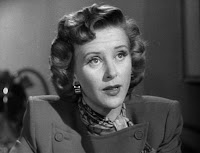 It also doesn't really qualify as a noir: It doesn't take place in a city; the action occurs mostly during the day; the hero is never corrupted or even really tested; and while one female character has a single nasty seduction sequence, I wouldn't classify her as a femme fatale. Instead it's just a straight-up crime story, with a trucking company suffering from a series of mysterious accidents along the titular highway in rural California. One of the company's drivers (Robert Lowery) takes it upon himself to figure out what's going on, and ends up suspected of the sabotage himself. The plot twists aren't particularly interesting or surprising, the acting is flat, the characters are one-dimensional (or, in several cases, no-dimensional), and the dialogue is amusingly bad. I laughed every time the head of the trucking company (Michael Whalen) showed up to express concern in the most unenthusiastic manner possible. As the movie starts he seems far more interested in his company's reputation for timeliness than in the fact that his wife was the victim of the latest accident. (Later, when it turns out that he was behind the whole thing and killed his wife on purpose, he's just as affectless and blase.)

Highway 13 barrels ahead so forcefully that you don't have a lot of time to stop and think about how stupid it is, although any time the movie shows a horribly unconvincing "mountain" backdrop or an absurdly explosive truck crash using miniatures, the lack of craftsmanship is immediately apparent. There isn't even a whole lot of titillation to captivate the drive-in audience; just bland innuendo between the hero and his girlfriend, and the aforementioned single seduction scene. Even the camp elements (including a curmudgeonly old diner owner prone to getting pies thrown in his face) are pretty lackluster. This one is likely to stay forgotten.
Posted by Josh at Wednesday, July 13, 2011 No comments: 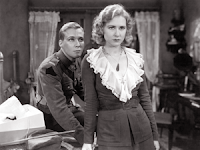 Of all the early Bette Davis movies that I record from TCM, most of which feature her in very small roles, Waterloo Bridge caught my eye because it was directed by James Whale, best known for Gothic-style horror movies like Frankenstein, Bride of Frankenstein, The Invisible Man and The Old Dark House. Waterloo Bridge isn't a horror movie and isn't remotely Gothic, but it does feature Whale's tendency to portray social pariahs sympathetically. In this case that's Myra (Mae Clarke, who went on to play Victor Frankenstein's wife in Whale's Frankenstein), a prostitute in London during World War I. She starts out as a chorus girl (which totally sounds like an early Hollywood euphemism for "prostitute" already), but when work dries up, she's forced to become a streetwalker. Her favorite pick-up spot is the title location, where she meets Roy (Douglass Montgomery), the world's most naive and wholesome soldier. He too is American, fighting with the Canadian military because he just couldn't wait to join the war effort. 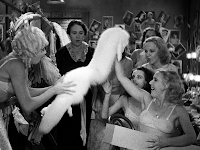 Myra agonizes over her relationship with Roy, who is clearly incredibly dim and can't figure out that he's fallen in love with a prostitute. Montgomery is bland and kind of dopey as Roy (which is sort of the point, I guess), but Clarke does a good job as the conflicted but good-hearted Myra, and Whale treats her position very matter-of-factly, as do the other characters who know about it. It's a refreshingly non-melodramatic portrayal of Hollywood's go-to tragic profession, right up until the very end when Myra gets what looks suspiciously like cosmic comeuppance for her harlotry. The pre-Code laxity also provides for a nice scene at the beginning in which Myra and her fellow chorus girls are in various states of undress backstage.

But what about Bette Davis? Yes, she's in this one, too, although to very little effect. She plays Roy's sister, who appears in maybe two or three scenes and exists solely for exposition purposes or to move the plot along. She's perfectly fine, but there's no indication of future star power, and the part could probably have been played by anyone. Davis would later get plenty of chances to play fallen women, and I think she could have done well as Myra here, although Clarke really does quite a good job, especially in contrast to Montgomery's tiresome swooning. Waterloo Bridge was based on a play, and it does seem a little stagebound at times; I think maybe half the movie takes place in Myra's one-room apartment. It was adapted again in 1940 with Vivien Leigh (the most famous version) and in 1956 as Gaby with Leslie Caron. Bette Davis never got the chance to play the lead.
Posted by Josh at Sunday, July 10, 2011 No comments: