With end-of-year list-making and awards-voting rapidly approaching, I'm trying to catch up on some notable movies of 2011 that I missed.

Heartbeats (Monia Chokri, Xavier Dolan, Niels Schneider, dir. Xavier Dolan)
Dolan is a bit of a film-fest wunderkind; he made his acclaimed first feature, I Killed My Mother, at 20, and was only 21 when he wrote, directed, edited, costume-designed and starred in Heartbeats. It's quite self-assured for someone so young, but it's also a little overly enthusiastic, so in love with its own sensual visuals that it sometimes forgets to be about anything. Dolan and Chokri play two friends (one male, one female) who fall for the same guy and engage in a passive-aggressive rivalry for his affections (which he clearly has no intention of giving to either one). The characters are pretty shallow, and the movie sort of celebrates that, shooting them in vibrant colors and lush slow-motion, with wall-to-wall pop songs and classical concertos on the soundtrack. It makes for a luxurious but sometimes frustrating viewing experience; the interludes featuring unrelated characters monologuing about their own romantic troubles are often far more incisive than the movie's main thread, but Dolan does capture a sense of how it feels to be young and pointlessly in love.

Martha Marcy May Marlene (Elizabeth Olsen, Sarah Paulson, John Hawkes, dir. Sean Durkin)
I've been reading and hearing about this movie since it played Sundance back in January, so it was probably inevitable that I wouldn't be blown away when finally seeing it. But even if I wasn't wowed to the degree I might have been if I had experienced the movie without any hype, I was still substantially impressed, both with Olsen's acclaimed performance and with Durkin's filmmaking. This is an impeccably written, directed, shot and edited film, creating a mounting sense of disorientation and unease perfectly in line with its title character, who's physically escaped from a cult but clearly hasn't freed herself mentally from the group's influence. I like the unsettling ambiguity, although sometimes things are so vague that it's hard to figure out what Durkin is going for. But the confusion helps to align the audience with Martha's distressed mental state, and Durkin keeps you on edge all the way through the end.

Point Blank (Gilles Lellouche, Roschdy Zem, Elena Anaya, dir. Fred Cavaye)
This is the kind of movie that would star Gerard Butler and get dismissive reviews if it were made in the U.S., but because it's French it has an air of respectability that seems to have blinded some to the fact that it's just another ludicrous thriller with giant plot holes and no character development. Cavaye was behind the French movie that was remade in the U.S. as The Next Three Days, and Point Blank is similarly melodramatic and manipulative, with the main character's pregnant wife constantly in peril. There are a number of really contrived fake-outs, and while some of the chase scenes are exciting, the whole thing is completely hollow and forgettable. I expect a Hollywood remake shortly.

Win Win (Paul Giamatti, Alex Shaffer, Amy Ryan, dir. Tom McCarthy)
I liked McCarthy's first movie, 2003's The Station Agent, but despite their acclaim his next two haven't really impressed me. I thought The Visitor was predictable and preachy, and Win Win has the same problems, presenting a low-key version of a familiar inspirational story, about a troubled guy who learns what's important in life thanks to his relationship with a wayward kid. It's clear that Giamatti's lawyer/wrestling coach is going to take in his elderly client's teenage grandson, and it's clear that the kid's going to be a star wrestler. McCarthy's approach lacks broad sentimental moments, but it also keeps things so subdued that it lacks all passion and excitement. It's too restrained to be rousing, and too obvious to be challenging.
Posted by Josh at Tuesday, November 29, 2011 No comments: 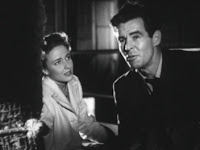 It's kind of hilarious to watch this ridiculous piece of Red Scare propaganda, until you realize how seriously some people took the material. Supposedly producer Howard Hughes offered this project (originally titled I Married a Communist, until the studio changed the title to The Woman on Pier 13 thanks to poor audience response) to directors as a test of their patriotism, and he was turned down an appropriate 13 times before finally finding someone (British director Robert Stevenson, who went on to make family classics like Old Yeller, Mary Poppins and The Absent-Minded Professor) to take it on. Those various other filmmakers were right to pass on Hughes' offer, since Pier 13 is a laughable piece of hysterics that envisions the American Communist party as a group of thugs who are essentially interchangeable with any other 1940s movie gangsters. 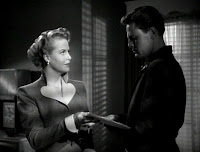 The stolid Robert Ryan plays a San Francisco shipping executive who's changed his name to escape his shameful past as a Communist Party member, but here the Commies are like the mob: Just when you thought you were out, they pull you back in. Janis Carter is pretty entertaining as the Commie femme fatale, who returns to help blackmail Ryan's Brad Collins (or Frank Johnson the Commie) into sabotaging labor negotiations at the San Francisco pier (hence the retooled title, I guess, even though no pier numbers are ever mentioned). Carter's Christine Norman also seduces Brad's brother-in-law for good measure, providing an important lesson about avoiding hot Commie seductresses who will indoctrinate you with sex (or something). 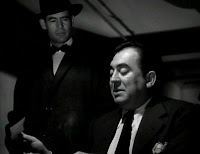 The whole thing resolves in a lame shoot-out, with the Commies getting what's coming to them, of course (although not before a series of overwrought murders). Thanks to Carter and a few hammy thugs, Pier 13 could be an okay second-rate noir, but the noxious politics really push it over the edge and make it sort of uncomfortable to watch. It's not quite inept enough to be obviously comical along the lines of something like Reefer Madness, and although reviewers at the time dismissed it as obvious propaganda, some audiences presumably took the message at face value. The actors do their best to imbue the absurd material with some semblance of reality, but it's pretty much a lost cause. Thankfully, the movie's hoped-for witch hunt became a lost cause, too.
Posted by Josh at Sunday, November 13, 2011 No comments: