Everybody Hates Chris (UPN)
After giving this one the highest rating of any new show in my TV column for Las Vegas Weekly, I stopped watching it after three episodes. Why? Well, for starters, I'm watching two other shows in the same time slot (Alias and Survivor) that I don't plan to give up, and since I'm often out in the evenings at movie screenings, I can only record so many things at once. On top of that, while I found the pilot (upon which I based my four-star review) very funny and warm, the subsequent episodes were less funny and sort of cliched. That said, it's certainly a pleasant show to watch, and when Alias goes on its eight-week hiatus, I may go back and give this show another shot.

Invasion (ABC)
I pegged this as the best new drama of the season back when it premiered, and even though other reviews have been mixed and a lot of viewers find the show too slow, I stand by that assessment. Part of the reason is that this season's new shows just haven't been as good as last season's new shows, but I do think this is an interesting drama with a lot of layers that some people don't really give it credit for. Yes, the plot progression is sometimes maddeningly slow (this week's episode didn't even feature a single supernatural happening), but I think that Shaun Cassidy and the rest of the writers have established a tone and pace that works for the story they're trying to tell. The show's characters are finding things out at a rate just as slow as the viewers are, and it's often as frustrating for them as it is for us. This is a show about a possibly dangerous unknown piercing the veil of normalcy surrounding a small town, and I think it does a very good job of playing on the fears of anything foreign coming in and taking over our wholesome American life (just like Invasion of the Body Snatchers, from which the show takes its name and much of its inspiration). But more than just the political allegory, I think this show does a fascinating job of using the supernatural to explore the idea of the crumbling family, the way that things like divorce can make us think that our parents or children or ex-spouses are such different people now that they've actually become aliens. I think at its heart this is a show about a man trying to keep his family together, not just in the face of divorce or re-marriage or premarital sex, but in the face of actual aliens. And that's what keeps me watching every week. 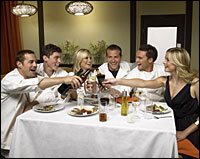 Kitchen Confidential (Fox)
It looks like this is on its way out after only airing three episodes, and I'm a little disappointed, but not heartbroken. It's a good show with funny moments, a solid cast and interesting characters, but it's definitely not spectacular, at least not in the few episodes that made it to air. It has a polished sort of urban sophistication that reminds me of Darren Star's last failed dramedy, Miss Match, which was also likable but not quite compelling enough to pull in a dedicated audience. If the show indeed comes back in December as Fox claims, I'll keep watching, and I think if it's given the chance to hit its stride, it could be a very good comedy. 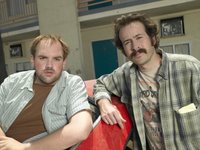 My Name is Earl (NBC)
This right here is the best new show of the season. It's probably the one show I look forward to the most each week, and the one that's the most consistently entertaining. It might even be my favorite show on TV right now, possibly edged out only by Veronica Mars. It's amazing that it takes a gimmicky premise (each week Earl tackles one item on his list of wrongs he's committed in his life that he wants to rectify), a good amount of sentimentality and characters who could easily be white trash stereotypes and turns it all into one of the smartest, funniest and most enjoyable shows on TV. Jason Lee is perfect as Earl, and the rest of the cast is excellent as well, especially Jaime Pressly (Jaime Pressly!) as Earl's vindictive ex-wife. Although the characters are dim and uncouth, the show never condescends to them, and it manages to throw in its life lessons without seeming sappy or heavy-handed. It's the kind of show that just makes you feel happy after watching it, which sounds silly but is totally true.

Prison Break (Fox)
This was probably the most hyped new show of the season, and while it's been very successful in the ratings, it hasn't necessarily delivered on the promise of its ingenious premise. Even the pilot didn't impress me as much as I'd hoped, with dialogue and characterization straight out of any B-level action movie. It's held my interest in fits and starts, most notably during the two-episode prison riot, but at this point things have gotten so formulaic (in each episode, they encounter a new obstacle that might prevent them from breaking out, overcome it and move on) that I'm getting bored. The conspiracy plot outside the prison was never anything more than a second-rate 24 knockoff, and given that the actual break is set to occur in a few episodes (after which the show goes on hiatus, possibly all the way until May), it seems like a good time to jump off this bandwagon.

Sex, Love & Secrets (UPN)
I think I was the only critic in America who liked this show, which got cancelled after four episodes (the last of which I unfortunately missed). Sure, it was cheesy and poorly acted and kind of stupid, but it was also campy and sexy and even unpredictable at times, making it lots of fun to watch. Since I'm not watching The O.C. or Desperate Housewives anymore, I need something to give me my nighttime soap fix, and this was looking like a good candidate. Too bad that in addition to being the only critic who liked it, I may have also been the only person who watched it.
Posted by Josh at Saturday, November 12, 2005