This is shaping up to be an amazingly good summer for quality TV. The shows I've been watching rival the best stuff that's on during the regular season, and I've also seen pilots for USA's Psych and Sci Fi's Eureka, both premiering in the next week and a half, and both of those look promising as well. Good thing I don't ever plan to leave the house.

The 4400 (USA)
I've always referred to this show as a cheesy guilty pleasure, but somehow it's evolved into something less guilty and more pleasure. It still has plenty of cheesy elements, and leans heavily on sci-fi cliches at times, but over the course of three seasons, it's built up a complex and interesting mythology, and moved away from its X-Files-lite "monster of the week" format to a more serialized take that widens the scope and treats the 4400 themselves sort of like the mutants of Marvel Comics (but with enough differences that it doesn't come across as a rip-off). This most recent two-parter, with Maia's disappearance, really highlighted the ways that the characters have evolved and the complex relationships that have developed. Like last season, it's obvious that they are leading up to something big, with the grown-up Isabelle and the imminent return of Jordan Collier, and they're doing a very good job of building suspense. This still isn't quite at the level of some of the other sci-fi shows I like (Lost, Battlestar Galactica, Invasion), but I think now I'd definitely keep watching even during the regular season.

The Closer (TNT)
Despite my general apathy toward police procedurals, I still really love this show, and that's all down to the wonderful characters. The writers and especially the actors have crafted such incredibly three-dimensional, fascinating characters, even with minimal personal moments amid the murder mysteries of the week. Kyra Sedgwick reveals more layers to her Deputy Chief Brenda Johnson every week, and it seems like the writers have gotten the hint that viewers like the character stuff, because there's definitely more of it this season. Not that it takes away from the crime-solving, and they do a good job with that too. The mysteries are always good enough to at least hold my interest, and often provide the catalysts for some of the more introspective developments. It's great that the ratings have been so high for this show and that TNT already picked up a third season; it's one of the best things on TV right now, and not just for people who like cop shows. 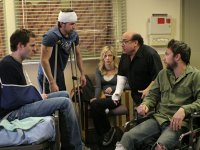 It's Always Sunny in Philadelphia (FX)
This was a real pleasant surprise last summer, a show I had no expectations for that turned out to be brilliantly hilarious. It's great that FX has given it another shot after last year's relatively low ratings and pairing with the awful Starved. I thought the two-episode premiere was really good, just as offensively funny as last year, and I like the increased focus on continuity that allows for some character development. I'm still not sure about the addition of Danny DeVito to the cast - he was funny in the first two episodes, but I think his character could get a little old appearing in every single episode. He takes the focus off of the great dynamic among the four core characters. At the same time, his whole storyline has opened up new possibilities, and I like that Anne Archer as Dennis and Dee's mom is going to be in at least one more episode. Mainly, I just love the uncompromisingly bleak view of humanity that this show has, and the way it makes that view so incredibly funny.

Pepper Dennis (The WB)
I realize this show got terrible reviews and I am currently the only person in America watching it, but I'm glad that the WB is going away and doesn't care about its ratings and thus was willing to run all 13 episodes, ending tonight. I really think this is a highly underrated show, and Rebecca Romijn and Brooke Burns, both former models, are proving themselves to be deft comic actresses, even if no one is paying attention. There's still a certain tension that's obviously never going to be resolved between the predictable, trite elements of the "single working girl in the city looks for love" premise and the more quirky stylistic tics that I like, especially the rapid-fire, screwball-comedy-style dialogue, but even when things are predictable and cutesy, the show is still entertaining and just plain fun. The writers have done a good job of developing characters to care about, even when they end up in absurd situations. Certainly if the show had kept going, they would have needed to evolve the Pepper-Charlie relationship so that every episode didn't revolve around whether they'll finally admit their feelings for each other, but tonight's finale with the wedding looks like the culmination of all that, and it'll be a nice note to go out on. If this show ever gets a DVD release, it's worth looking out for. 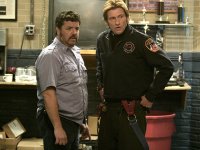 Rescue Me (FX)
There's been a lot of heated online debate recently about this show, particularly a scene in the June 20 episode with Denis Leary's Tommy Gavin forcing himself on his wife sexually (much of this debate has been about whether or not to call this event "rape," and I'm not quite sure myself what to call it). I'm not going to get into that here, because it's been discussed to death in numerous forums, most notably the Television Without Pity message boards, where co-creator Peter Tolan showed up to defend the show. I will say that the fact that so much impassioned rhetoric has ensued is a testament to the show's dramatic power, and whatever you think happened in that particular scene, it's also a bold direction for the characters. I was sort of down on this show at the end of last season, which had a lot of cliched and predictable storylines. But they've done a good job so far of dealing with the aftermaths of those storylines (the scenes with Uncle Teddy in jail are hilarious), and introducing new ones that are a little more complex. Tolan swears that he is trying to tone down the misogyny, but in the end that's one of the show's charms. One of the reasons the infamous scene didn't really bother me is that I've long since come to terms with the fact that this show is about unlikeable people doing stupid and/or bad things, but they're almost always fascinating to watch.
Posted by Josh at Tuesday, July 04, 2006