Unavoidably late, although I actually saw three of these movies weeks ago. 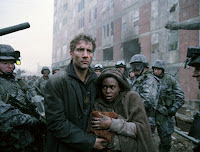 Children of Men (Clive Owen, Claire-Hope Ashitey, Chiwetel Ejiofor, Julianne Moore, dir. Alfonso Cuaron)
I had an odd experience with this movie: I was really excited about seeing it based on the previews, the premise and the talent involved; then I saw it about a month ago and was very disappointed, and sort of put it out of my mind; and several weeks later I started reading all these incredibly glowing reviews that made me feel like I had missed something and I ought to see it again. There wasn't another press screening before the release in Vegas, so I haven't gotten to see it again yet. But every positive thing I read about this film makes it sound like something I would really like, so I do wonder if I would appreciate it more a second time. As of my one viewing, I found the visual style rather striking (not only the long-take action set pieces, but also the production design, the costumes - all of it combined for a very satisfying aesthetic experience) and the future world very well-realized. I like sci-fi films that don't feel the need to spell out every detail of how things got the way they are, but allow you to form your own conclusions based on background details, and simply leave some things to the imagination. But plot-wise this movie was lacking for me - the chase was without real urgency and the message rather sappy ultimately. I didn't buy the political awakening of Clive Owen's character; actually, I found it sort of annoying. Plus, maybe it's wrong of me, but I find a world devoid of children sort of appealing. Prediction: I will not actually see this movie again. Opened limited Dec. 25; wide release this week 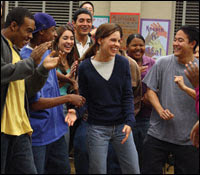 Freedom Writers (Hilary Swank, April Lee Hernandez, Mario, Patrick Dempsey, dir. Richard LaGravenese)
My review in Las Vegas Weekly
I'm a little surprised at the relatively positive reaction to this movie, which to me was about as square, boring, predictable and naive as they come. I sort of wanted to slap the Hilary Swank character for being so saintly, especially in the scene that basically vilifies her husband for daring to question her unhealthy devotion to her students at the expense of her marriage. My mom (a big Grey's Anatomy fan) got all excited that Dempsey was in this movie, and I had to tell her that McDreamy does essentially McNothing here. Wide release

Little Children (Kate Winslet, Patrick Wilson, Jennifer Connelly, Jackie Earle Haley, dir. Tood Field)
My review in Las Vegas Weekly
I remember being sort of indifferent to Field's first film, In the Bedroom, and I feel similarly here. The review is fairly negative, but I thought there were some positive aspects to the film, and overall I wasn't able to hate it with quite the passion of Jeannette Catsoulis, say. Much praise has gone to Haley's performance, but Noah Emmerich is just as good as the intense unemployed local man who makes it his mission to punish Haley's pedophile. There's some strong acting and some decent visuals, but the tone is too moralistic and condescending, and the characters are flat no matter how much the actors bring to them. Not one of the worst movies of the year, but certainly not worth its recent surge in praise and awards nominations. Opened limited Oct. 17; in Las Vegas this week

Perfume: The Story of a Murder (Ben Whishaw, Alan Rickman, Rachel Hurd-Wood, Dustin Hoffman, dir. Tom Tykwer)
I've found just about all of Tykwer's movies since the bracing Run Lola Run sort of soporific and indulgent. The Princess and the Warrior was tedious and overlong; Heaven was ponderous and forgettable. And I can't quite get into this either, although I will say it grabbed my attention more readily than those two others. It's got an odd pacing that breaks the story up into several segments with wildly divergent tones; I thoroughly enjoyed the parts with Dustin Hoffman hamming it up as an old perfume-maker, but the dark and bizarre final third didn't work for me. Still, it's a unique and memorable film, and any movie with a gigantic orgy can't be all bad. Opened limited Dec. 27; in Las Vegas this week
Posted by Josh at Saturday, January 06, 2007