Veitch @ Vertigo: Can't Get No and Army @ Love

Although Rick Veitch is something of an icon of indie comics and the early days of Vertigo (collaborating with Alan Moore on Swamp Thing and later taking over as both writer and artist), I wasn't familiar with his work until recently, when I happened to read his 2006 graphic novel Can't Get No and the first issue of his new ongoing series Army @ Love (both kindly sent over by DC/Vertigo) around the same time. These are very different works in many ways - obviously foremost in format, with one a longform, self-contained work, while the other is a serialized, open-ended story (the second issue was out last week, although I didn't read it). And Can't Get No is somber and sweeping, even in its moments of humor, while Army @ Love is a full-on satire. 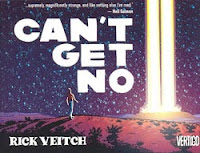 Let me get this out of the way before I go any further so you can understand my opinion on Veitch: They are both really, really bad. In fact, Can't Get No may be the most unbearable reading experience I've ever had with a graphic novel. It only took maybe 10 pages for me to realize I was going to hate it, and yet I read all 352 pages of it for the same reason, I suppose, that I refuse to walk out of a movie or turn off a DVD even if I can't stand what I'm watching. Veitch's art is clear and accomplished enough, but his subject matter and storytelling style are so pretentious and cloying that they easily overwhelm any enjoyment that comes from the appealing visuals. The book is in an odd horizontal format, with long, squat pages, and the art is simple, black-and-white linework. The most striking formal element, though, is the disconnect between the words and the pictures. There are no dialogue bubbles or thought balloons; rather the entire book is filled with narrative captions that form sort of an epic, free-verse poem, using overwrought and pseudo-profound language that generally has little if anything to do with what the reader is looking at.

On top of that, the subject matter here is 9/11 and its aftermath, which is certainly legitimate but takes a special touch not to seem like exploitation. Veitch's meaningless, irritating narration makes it look like he's tacked it onto a national tragedy in order to give it false resonance, and the actual story, with a protagonist covered accidentally in indelible ink, seems like some sort of hazy metaphor for the country being marked by something it can never erase. While the art is good, it can't really convey much without dialogue, and thus the characters are all just ciphers. Veitch seems like someone with very strong political views who has trouble expressing them without resorting to obtuse literary devices.

Which is essentially the same problem with Army @ Love, an unfunny and completely bizarre satire that, although it's told in a much more straightforward style, is no less baffling than Can't Get No. Veitch's near-future world in which the U.S. Army uses battlefield sex to recruit people and makes war cool again is both illogical and confused, and I'm not exactly sure what aspect of current political or military life is being satirized here. It's so over the top that certainly none of the characters are sympathetic or easy to identify with, and the humor seems rather dated. Again, the art is solid, and helped by Gary Erskine's strong inking, but Veitch's point is lost under his strained efforts to shock. I also can't imagine how this is sustainable as an ongoing series.

Not many people are doing explicit political commentary in mainstream comics (unless you count something like Civil War, which I wouldn't), so it's good that Veitch is making the effort and Vertigo is supporting it, I guess. As much as I admire grand, ambitious failures, though, I'd much rather see something more down to earth with fully realized characters that makes its point less showily, but maybe with greater effect.
Posted by Josh at Friday, April 27, 2007