Knocked Up (Seth Rogen, Katherine Heigl, Paul Rudd, Leslie Mann, dir. Judd Apatow)
My review in Las Vegas Weekly
Although I enjoyed this movie well enough, I'm not with the surprising groundswell of critics who seem to think it's an instant comedy classic. There's definitely some overrating going on here, maybe because most comedies are so bad that finding one that's both funny and well-constructed as a film is such a shock that people's reactions are a little exaggerated. And maybe it's just my hatred of children, but I definitely found something off-putting about the movie's family-values message and its reprimand to aimless slackers to grow up and take on some responsibility. Slate's Dana Stevens, in a mildly positive (although marked as "rotten" on Rotten Tomatoes) review, talks about this a little, as well as Apatow's handling of women (which I thought was more effective than she did). She's one of the few critics to seriously address any negatives about this movie, especially from a sociopolitical standpoint, and I think that's a position that's being overlooked out of the shock of "Man, this shit is funny." Wide release 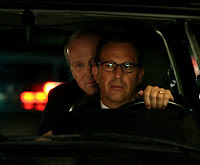 Mr. Brooks (Kevin Costner, William Hurt, Demi Moore, Dane Cook, dir. Bruce A. Evans)
Casting Kevin Costner and Dane Cook as a serial killer and his peeping-tom admirer, respectively, is certainly a bold move, but not much in this movie pays off. Costner is always at his best playing loveable schlubs, so his polished and tortured businessman who can't resist the allure of killing never really comes to life, despite an occasional mischievous gleam in his eye. Hurt is better as Mr. Brooks' alter ego/imaginary friend, because he knows that the only way to get through a movie like this is to ham it up as much as possible. Too bad he can't save the muddled plot and stiff direction, or account for Moore's awful performance as a hard-nosed detective who's also worth millions. There are random plot digressions and loose ends galore here, and standard serial-killer psychology that's been tired since the first Silence of the Lambs sequel. Unless you're a Dane Cook hater who (spoiler alert!) wants to see the annoying comedian's neck slashed open with a shovel, steer clear of this one. Wide release

Offside (Sima Mobarak-Shahi, Shayesteh Irani, Ayda Sadeqi, dir. Jafar Panahi)
My review in Las Vegas Weekly
I've seen very few Iranian movies, but I didn't realize until looking up info online later that Panahi was actually also the director of Crimson Gold, one of the handful of other Iranian films I've seen. Gold was grim and pessimistic, but this film, despite its clear political message, is optimistic and life-affirming, suggesting that the artificial boundaries of a repressive society like Iran's can be brought down by the unifying force of soccer. It's sweet but unsentimental, and entertaining in its pointed social commentary. Opened limited Mar. 23; in Las Vegas this week
Posted by Josh at Friday, June 01, 2007