August Rush (Freddie Highmore, Keri Russell, Jonathan Rhys Meyers, Robin Williams, dir. Kirsten Sheridan)
My review in Las Vegas Weekly
Various scheduling issues kept me from seeing this week's other modern fable, Enchanted, but all indications are that it gets right everything this film gets wrong. It's not easy to strike the right balance between the realistic and the fantastic in a movie like this, and while I give it credit for trying, the result is a definite failure, sappy and lifeless and unexciting. I'm happy to see Keri Russell getting more mainstream roles after the obscurity she languished in for a while post-Felicity, though. Wide release

Hitman (Timothy Olyphant, Dougray Scott, Olga Kurylenko, dir. Xavier Gens)
I was glad that our video-game critic also hated this movie, since video-game fans tend to get defensive about bad reviews of video-game movies. I have nothing against video games - I haven't really played any since I was 12, but I think they're an entirely legitimate form of entertainment and even art. If you like the Hitman video game, you should probably go play it rather than seeing this movie, which is incoherent, poorly written and really very boring. It's so cheap-looking that I'm sort of surprised it didn't go direct to DVD; the story, the cast, the direction and the subject matter all scream "Blockbuster original." Wide release

The Mist (Thomas Jane, Marcia Gay Harden, Laurie Holden, Toby Jones, dir. Frank Darabont)
My review in Las Vegas Weekly
Some reviewers have praised the bleakness of the changed ending to this film, but it really bugged me, and not just because it altered the source material (which is decent but not exactly Stephen King's best work). It just seemed like such a cheap shock tactic, and while I like movies with dark worldviews and am impressed that a major studio film can get away with such a downer of an ending, it just was so jarring that it negated a lot of the character work that went before it. Other than that, though, I think this is a good horror movie, suspenseful without being gory, and a fun bit of nostalgia for drive-in B-movies. Wide release 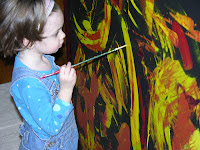 My Kid Could Paint That (documentary, dir. Amir Bar-Lev)
As I've said before, any documentary that is about an obscure and fascinating story rather than a political issue is okay with me, and this one certainly qualifies. Bar-Lev agonizes a little too much over the ethics of his movie when the question of whether or not his subject, a 4-year-old art prodigy, actually paints her own pictures comes up. His inserting of himself into the film is overly dramatic, and while the question is a valid one, it seems to sort of take over the last third of the film. Even so, this is a really interesting movie, and a story that demands a follow-up a few years down the line (when the girl is a teenage drug addict whining that she peaked at age 4). Opened limited Oct. 5; in Las Vegas this week
Posted by Josh at Wednesday, November 21, 2007