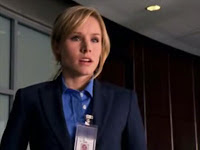 At the end of the final season of Veronica Mars, in a last-ditch effort to save the show, creator Rob Thomas pitched The CW on a complete reinvention, which would fast-forward several years and find Veronica a first-year FBI agent, presumably offering a fresh enough start to attract new viewers who didn't want to catch up on three seasons' worth of backstory. Ultimately, The CW passed on the idea, but before they did so Thomas & Co. produced a 12-minute presentation, a sort of mini-pilot for the potential new series, and it's been released as an extra on the Veronica Mars Season 3 DVD.

Only Kristen Bell as Veronica shows up in the presentation, although presumably other regular characters might have shown up in recurring roles as time went on (Veronica's dad, at least, seems like a given). More than just moving the character forward in time, the presentation really does change the tone of the show, less detective noir and more typical cop drama, with Veronica joining a photogenic crew of fellow young agents. Thomas says in the supplementary interviews that the network wanted a Grey's Anatomy-type show, and indeed there are hints that this could be the same mix of soapy relationship drama and procedural, with cop work replacing medicine.

Jarring as the shift is, though, it's still recognizably Veronica Mars, both the show and the character. Bell manages to make Veronica seem older and a little wiser while retaining her tough, sarcastic demeanor, and the hints of a messy break-up with a fellow trainee point to her having moved on romantically from Logan, which predictably drove some online fans nuts (and certainly would have more so if it had actually made it to air). The presentation quickly introduces a few new characters and sketches a basic plot, but it ends right about where the first commercial break might be, and skips around a bit before that. Reaction online seems to have been mostly negative, but I would have liked to see this turned into an actual series. I think it would have actually solved some of the problems inherent in seasons two and three, mainly that their efforts to build on the plot elements of the first season often paled in comparison. Since Thomas envisioned season one's plot initially as a novel, it was completely self-contained, and doing a sequel of sorts that took place years later I think would have worked better than the direct continuations of the second and third seasons.

Of course, we'll never know, but it's nice to have this little glimpse, and it does give me some faint hope for the theoretical movie and/or comic-book series that have both been rumored for a while. There's still plenty of potential in this character, and even a 12-minute teaser can show that.