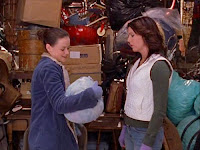 My co-worker who has kindly loaned me her Gilmore Girls DVDs doesn't own anything beyond the fourth season, because as she sees it that's when the show ceased to be worth watching. Although I mostly enjoyed the show's third season, and thought a few of the episodes were as wonderful as anything in past years, I can definitely see the seeds of decline being planted here. For me, the biggest frustration was the same I had with the second season: I couldn't stand either of Rory's two love interests (Dean and Jess), and Lorelai's paramours were virtually nonexistent. Both Dean and Jess seem to have been disposed of, at least for the time being, by the end of the season, but their competition for Rory's affection took up so much of the show's time that it really drained the energy out of a lot of episodes. Jess is clearly an unrepentant asshole, but while it's fine to have someone to root against, it's tough when his rival for Rory's affections is the completely bland, personality-free Dean (who only becomes mildly interesting after he and Rory break up).

Although Rory is a little whiny and entitled, she's an interesting character because she's allowed to grow and make mistakes (at least more so than her mother), and the fact that the show doesn't treat her relationship with Jess as a complete error of judgment is infuriating given the way he treats her. Only at the end of the season, after he's moved to California for his thankfully never produced spin-off, does she get to express real anger and acknowledge what the audience has been able to see for the entire season. Lorelai, on the other hand, seems incapable of growing at all, and this season really shows the limits of her conflict with her parents, played out in the same predictable notes over and over again. What she needs is a love interest who can match her quip for quip, but instead she gets only a brief cameo from Max, and Billy Burke in two episodes as a character who just vanishes into the ether. The will-they-or-won't-they tension with Luke continues to simmer sort of pointlessly, and once again my knowledge of how goddamn long it's going to continue only makes it more irritating. 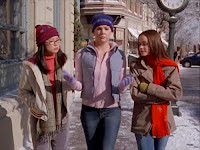 But lest it sound like I hated everything about this season, let me say that one of the reasons the flaws are so infuriating is because the rest is so good. The relationship between Lorelai and Rory is as rich as ever, and just watching them sit on the couch and chat for 44 minutes would make for a good episode. The dialogue remains sharp and clever, and background characters like Paris and Lane really develop in their own interesting ways this season - both of their romantic lives are more interesting than Rory's, even with their extremely minimal screen time. Part of the problem is that in a show that's just about life being lived, new obstacles and setbacks have to constantly arise for the characters to have something to do, and as time goes on the crises seem more and more contrived. The good still outweighs the bad, though, so I head on to the fourth season hoping to see the characters mature and change a bit, to stop enacting their same conflicts and maybe even learn something from their (mostly entertaining) mistakes.
Posted by Josh at Tuesday, January 29, 2008