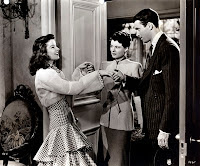 The pervasive sexism of these old screwball romantic comedies has hampered my enjoyment of them in the past (I couldn't get into His Girl Friday at all), but it was subdued enough here that I was able to focus mostly on the film's many virtues, including the incredibly smart writing, the surprisingly complex plot and the excellent acting. This is one of the prototypical romantic comedies, but for much of its running time it presents a genuine question of which potential suitor the heroine will end up with (her dopey, barely seen fiance is of course out of the running, but both Cary Grant and James Stewart play the kinds of characters who typically end up getting the girl in romantic comedies). The eventual resolution is the most obvious one, but for once it actually feels earned, even if it forces Katharine Hepburn's headstrong Tracy to assume the subservient, traditionally feminine role that she's spent most of the movie avoiding.

Stewart (who won an Oscar for his role) and Grant are both excellent as the cynical but of course goodhearted men who are simultaneously drawn to and repulsed by Hepburn's often abrasive blueblood, and Hepburn herself gives a great performance that should be studied by all female rom-com leads, making Tracy into a smart and independent woman who's not defined solely by her search for love (until, um, the end of the movie). Ruth Hussey is also appealing as the sort of background love interest who turns out to be the right one for Stewart's Macaulay Connor. She doesn't have as much screen time, so she doesn't have to undergo quite as much taming as Tracy does to make the outcome of the movie conform to traditional ideas of marriage and romance.

The scene in which Tracy's father basically tells her that women are obligated to tolerate their husbands' affairs, and it's the wife's fault if a marriage breaks up after the man cheats - and then she apologizes to him for disagreeing! - did make me a bit ill, but it's well-balanced by all the wonderful post-party scenes the night before the doomed wedding, where the drunken characters engage in all sorts of funny and honest soul-baring and debauched behavior. This is a film resolutely of its time, to be certain, and deserves a little leeway. But it seems like so many of the movies that it's influenced have taken from it only its ultimately regressive sexual politics and not its celebration of challenging romance between complicated people.
Posted by Josh at Wednesday, February 27, 2008