See, this is the kind of movie that Angelina Jolie's evolution into savior of the Third World is denying us. A lurid, ridiculous melodrama that was savaged by critics and tanked at the box office, Original Sin is a nasty, sexy, campy good time, and I'm glad I added it to my Netflix queue after reading some revisionist take on it somewhere (which I can no longer locate to link to). This is sort of like the Wild Things of 19th-century Cuba, with Jolie as a sultry seductress who shows up as a mail-order bride for Antonio Banderas' rich coffee merchant. She is, of course, not who she says she is, and in short order she's stolen all his money and run off. But the sex was so hot that he just has to have her (or maybe kill her), so he heads off in pursuit, along with Thomas Jane in a very silly-looking fake mustache as a private investigator who is, of course, not what he seems. 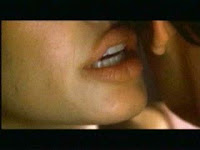 Cristofer, who has yet to make another movie as a director, clearly knows what he's got in his star (he also directed Jolie in her breakout role in Gia), and lingers on every inch of her gorgeous body, which is on ample display throughout the movie. There are extreme close-ups of Jolie's famous lips recounting her sad tale as she sits in a jail cell awaiting execution. There are very hot and intense sex scenes between Jolie and Banderas in some very naughty positions, which really sell the crazy passion between the two characters (and offer Jolie lots of opportunity to flash her fabulous breasts). It's not hard to believe that this woman could drive men insane with lust (she even nearly seduces an actual monk), and the twists and turns are so overheated that they can't help but be entertaining in a romance-novel sort of way (the movie is based on a book by renowned pulp writer Cornell Woolrich). 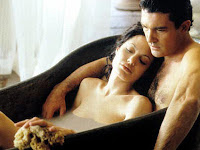 Jane also gives the most exuberant performance I've ever seen from him, going so far as to give Banderas an open-mouth kiss (to see if he can taste Jolie on Banderas' lips, of course) in one of the movie's more over-the-top scenes. Jolie oozes sex, but also occasionally slips into a light British accent for no discernible reason; she still delivers the stylized dialogue with verve and passion. Cristofer goes all out with the sumptuous costumes and tight, tight corsets and opulent locations and showy camera moves and slo-mo. But it all comes down to the kinky sex (the unrated cut I watched comes with two extra minutes - of fucking!), and I think it's sad that Jolie isn't likely to give another performance in which her character is ritually cut and then gets off when her lover licks up the blood any time soon.
Posted by Josh at Monday, April 14, 2008