(Apologies for lateness; it's been a busy week.) Hear me chat about these movies with UNLV professor Katy Gilpatric, of Movies That Matter and Vegas Arthouse, on this week's Josh Bell Hates Everything podcast.

Flow: For Love of Water (documentary, dir. Irena Salina)
My review in Las Vegas Weekly
I know I say this a lot, but here again is a movie that doesn't need to be seen on a big screen. It's more educational than entertaining, and clearly slanted toward a certain point of view. That's not necessarily bad, but it means that the audience for this is very narrow and self-selecting. If the issue interests you, you're better off donating your $10 to an organization that brings clean water to underprivileged areas than spending it to see this well-meaning but didactic movie. Opened limited Sept. 12; in Las Vegas this week 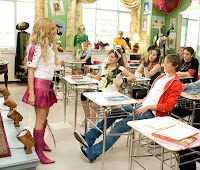 High School Musical 3: Senior Year (Zac Efron, Vanessa Hudgens, Ashley Tisdale, dir. Kenny Ortega)
My review in Las Vegas Weekly
I have a certain affinity for pop culture marketed to tweens, which tends to get quickly dismissed by mainstream critics (and anyone over the age of 12). I'll gladly stand up for the Jonas Brothers or Aly & AJ or even Wizards of Waverly Place, and the High School Musical series has its moments. There aren't quite enough moments to make this movie worthwhile for anyone other than the diehard fans; a couple of numbers do showcase a bit of creativity, but overall the songs are bland, the acting is flat, and the plot is recycled. But I'm still happy to see entertainment for kids that pays attention to story and character (even in a simplistic way), and at least has a sense of cinematic history when it comes to its genre. This isn't great entertainment on its own by any stretch of the imagination, but it could very well function as a gateway to something better, and for that I have to give it credit. Wide release

Pride and Glory (Edward Norton, Colin Farrell, Noah Emmerich, Jon Voight, dir. Gavin O'Connor)
My review in Las Vegas Weekly
This movie is so rote and predictable that I think it had already left my mind by the time we got to this week's podcast. Really, the only thing I remember at this point is Colin Farrell threatening to iron a baby. That certainly got my attention; the rest is instantly forgettable. Wide release

Saw V (Tobin Bell, Costas Mandylor, Scott Patterson, dir. David Hackl)
I actually sat through a marathon of the entire Saw series leading up to this movie (story forthcoming in next week's LVW), which served to highlight how particularly inept it is, even in comparison to the crappy earlier installments. I think Saw IV is the nadir in terms of convolution, but this one is just outright boring, with more contortions to fit in dead Jigsaw and another new accomplice, plus a death-trap scenario with random new characters who never have any bearing on the main plot. There are a bunch of scenes without any payoff that seem to exist solely to set up Saw VI; the prospect of that next chapter is the scariest part of all. Wide release
Posted by Josh at Saturday, October 25, 2008