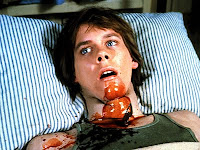 So Friday the 13th is a horror classic almost by default, and not really in a league with its supposed peers of the time. But it's also worth looking back on for horror fans, to see how different this franchise was when it started out, and to spot a few interesting elements that have since been lost.
Posted by Josh at Thursday, May 13, 2010