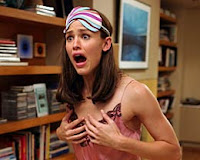 I really didn't expect much out of this lightweight 2004 romantic comedy, although a few people I know had recommended it as being worth a look, and it got better reviews than most of its kind. So I was pleasantly surprised to find an entertaining, well-acted piece of fluff, with (of course) a predictable plot and some strained comic moments but far more genuine emotion and character development than I ever would have imagined. Director Gary Winick has gone on to make movies ranging from unspeakable (Bride Wars) to forgettable (Letters to Juliet), but here he strikes an effective balance between the cliches of the genre and telling an actual heartfelt story.

It helps that 13 Going on 30 doesn't follow the typical rom-com formula, since it's more indebted to the classic body-swap genre that flourished in the '80s with movies like Vice Versa, Like Father Like Son and especially Big, to which this movie owes everything. As in Big, here a teenager (13-year-old Jenna) wishes to escape her problems by becoming a grown-up, and gets her wish. Instead of just becoming an adult, Jenna fast-forwards 17 years in her life to when she's 30 and, naturally, she has to learn to appreciate all the things she wanted to throw away as a teen (including her best friend, who's grown up to be Mark Ruffalo).

Sure, you can guess everything that happens in this movie from the moment it starts, and the plot is full of lame contrivances. But Jennifer Garner is really charming as Jenna, and does a great job of coming off like a 13-year-old in a 30-year-old's body while also gradually becoming more comfortable over the course of the film. The '80s kitsch (Jenna jumps from 1987 to 2004) is rarely overplayed, and the always welcome Judy Greer has the right amount of bitchiness and humor as Jenna's frenemy. Even the rom-com elements are executed fairly well, with the unsuitable secondary partners never getting vilified or trashed. This is a movie that climaxes with a main character rushing to stop a wedding, so it's never going to be subtle or daring. But for what it sets out to do, it does it remarkably well.
Posted by Josh at Sunday, June 13, 2010