It's silly to expect these later Halloween sequels to be quality films, but at least there's some dumbass entertainment value to be found in the previous two installments. No such redeeming qualities show up in Halloween: The Curse of Michael Myers, the sixth and possibly worst film in the series. It follows up on some of the plot elements of Halloween 5, but in a haphazard, nonsensical way, taking the mysterious symbol and black-shrouded stranger of that movie (which were annoyingly never explained) and making them part of some sort of mystical cult that worships or perhaps created Michael Myers (like everything in this movie, it's totally unclear). Curse is consumed with this idiotic mythology, which makes even less sense after all the on-set rewrites and reshoots that came out of creative clashes between director Joe Chappelle, screenwriter Daniel Farrands and producer Paul Freeman. And while Curse is gorier than previous installments, it's also almost completely suspense-free, thanks to Michael being on a killing rampage from the first scene, with no time to build up interesting characters or situations to care about. 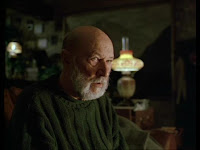 Right away the filmmakers trash the work of the previous two films, with poor Jamie (now played by J.C. Brandy) getting offed early on, right after giving birth to a son who is apparently the new designated heir of the Michael Myers legacy (at least as far as the muddled cult is concerned). It's a shame that Danielle Harris didn't come back for even this brief appearance; it's clear from the disaster that is Curse just how vital her presence was to the previous two movies, and she's become nearly as much of a franchise icon as Jamie Lee Curtis or Donald Pleasence (she did go on to play a teenager in Rob Zombie's two remakes). Pleasence does come back, but his role is diminished, partially because Chappelle reportedly didn't like his work and cut many of his scenes, and partially because he died before the extensive reshoots took place. It's a sad way for this distinguished actor to end his career.

The real star of Curse isn't the top-billed Pleasence but Paul Rudd in one of his earliest movie roles, playing the grown-up version of Tommy Doyle, the little kid Laurie Strode was babysitting in the first movie when Michael attacked. Tommy has become a super-creepy loner obsessed with Michael (so where was he in the previous sequels?), and he somehow lucks in to finding Jamie's infant son, whom she has conveniently stashed in a cabinet in a bus-station bathroom before getting killed. Tommy is intense and weird, but Rudd's performance is so hammy that it seems like a constant self-parody. Although he's now known primarily for comedy, Rudd can certainly pull off dramatic roles. Here, though, he seems like he's about to bust up laughing the whole time, and it makes Tommy more goofy than creepy.

None of the acting here is any good; Pleasence lumbers through his role without any hint of the craziness that Loomis displayed in previous movies (he's even somehow lost his burn scars, although he retains his limp). And Chappelle's direction has none of the visual flair of Halloween 5's Dominique Othenin-Girard. There's apparently a radically different cut available in bootleg form, with more than 40 minutes' worth of different footage, and perhaps that version makes more sense, or is at least coherently edited (here, scenes often seem to be missing or cut before they've actually ended). Even so, I can't imagine there's actually a good version of this movie to be salvaged from this fiasco.
Posted by Josh at Friday, October 29, 2010