I saw more than 400 movies for the first time this year, probably only a little more than half of which were actually released in 2010. So as I did last year and the year before, I'm putting together a second top 10 list, aside from the more attention-getting one of my favorite new movies of the year (which you can see in the next Las Vegas Weekly). Here then is my list of the top 10 movies I saw for the first time in 2010 that came out in previous years.

1. Breakfast at Tiffany's (Blake Edwards, 1961) I actually got the chance to see this movie in a theater, as part of a vintage film series at one of the local Regal Cinemas. I didn't really have expectations either way -- mostly it was the most convenient movie in the series for me to go see with a friend -- but I was so surprised and delighted with how sophisticated, clever, stylish and moving this film is, with absolutely terrific performances from Audrey Hepburn and George Peppard. It's so casually complex about sexuality, coyly but clearly referring to the way its main characters trade sex for money and other benefits. And it effortlessly captures that excitement of being young and living in a city; it made me want to move to New York in 1961. Yes, Mickey Rooney plays a horribly racist Japanese caricature, and, yes, much of the explicitness of Truman Capote's novel has been toned down. It's still a fantastic movie, a wonderful romance and a shining example of the best of the time period. 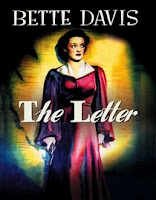 2. The Letter (William Wyler, 1940) I watched 30-plus Bette Davis movies this year for a project that's still ongoing, so I could probably have made this list into my top 10 Bette Davis movies of 2010. The Letter certainly would have topped that list, but it places deservedly among all the movies I saw this year. It's a masterfully shot, expertly constructed noir with Davis at her devious best, playing a haughty plantation owner's wife defending herself from a murder charge. Wyler (working from a play by W. Somerset Maugham) weaves a complex story full of shady characters and shifting allegiances, and he uses the Malaysian setting effectively to portray the perils of colonization. Read more in my original post.

3. Rock N' Roll High School (Allan Arkush, 1979) There will eventually be a full piece on this movie, which I watched for a project that I am still working on. For now I will say that, like Breakfast at Tiffany's, this movie is very evocative of a certain time and place, although it's more of a generic time of life (high school) and location (the suburbs) than something concrete. It's just an infectiously fun movie about teenage rebellion and thinking that your favorite band is the most important thing in the world and having debilitating crushes on classmates, and it's set in this kind of stylized fantasy world that amplifies and personifies the extremes of teenage emotions. Plus, P.J. Soles is great as Riff Randell, and the Ramones rock, too. 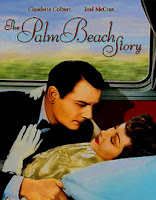 4. The Palm Beach Story (Preston Sturges, 1942) I'm consistently amazed at the kind of weird, off-kilter storytelling Sturges was able to throw into Hollywood studio films in the 1940s. This movie subverts expectations at every turn, getting its leads (played wonderfully by Claudette Colbert and Joel McCrea) together at the beginning, splitting them apart and then not forcing them to fall in love again but instead demonstrating how hard they work to keep each other happy. It's goofy and funny and never predictable, another demonstration of Sturges' boundless creativity. Read some more in my post about Claudette Colbert. 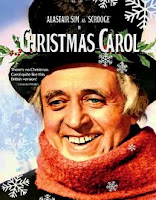 5. A Christmas Carol (Brian Desmond Hurst, 1951) Of all the Christmas movies I watched for my Christmas in July feature, a version of A Christmas Carol is pretty low on the list of what I would have expected to be my favorite. But this austere and surprisingly affecting version starring Alastair Sim is not only the best of the Dickens adaptations I watched, it's also the best of all the Christmas movies I wrote about. No matter how familiar you are with this story, you'll get something out of Sim's deeply felt performance as Scrooge, stripping away everything that has made the character into a cartoon over the years and showing him as a damaged, sad and pitiable man. Read more in my original post.

6. 24 Hour Party People (Michael Winterbottom, 2002) There's a full piece on this one forthcoming as well, with more on its manic visual style, self-referential writing and performances and giddy celebration of the Manchester music scene of the 1980s and '90s. Winterbottom is one of those directors whose greatest strength/weakness is working in pretty much every genre imaginable, but 24 Hour plays to his best instincts, with a funny, hyperactive lead performance from Steve Coogan and just the right balance of snark and reverence in regard to its subject, music impresario Tony Wilson.

7. The Little Foxes (William Wyler, 1941) Hey, it's another William Wyler-directed Bette Davis movie. Like The Letter, The Little Foxes features Davis as a gleefully nasty schemer, although in this movie she's just one of several unscrupulous characters, all part of a toxic Southern family in 1900. The writing, by Lillian Hellman based on her play, is complex and unconventional, and Wyler's direction makes the stage-based material into something dynamic and cinematic. Davis always excelled at playing characters who are compelling in their awfulness, and in The Little Foxes she digs into one of her best. Read more in my original post. 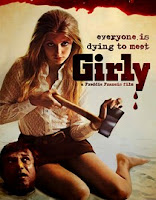 8. Mumsy, Nanny, Sonny and Girly (Freddie Francis, 1970) I had no idea what to expect from this weird British cult horror movie when I volunteered to review its long-awaited DVD release. But it totally transfixed me with its surreal, unnerving take on the horror-movie staple of the demented family, and its complete lack of explanation or back story is chilling in the best way. Part sadistic horror movie, part social satire, the movie toys with its audience the same way its characters toy with their kidnapped victim. With creepy performances and a moody, evocative style, Girly really deserves a rediscovery now that it's on DVD. Read more in my DVD review. 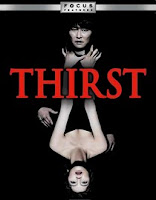 9. Thirst (Park Chan-wook, 2009) When I saw Park's fanboy favorite Oldboy, I think I had heard too much hype, and I was impressed but not wowed. I came to Thirst without the same preconceptions, and I was drawn in much more effectively. The unconventional vampire story goes in all sorts of unexpected directions, and Park takes on over-the-top violence, severe crises of faith and all-consuming love with equal verve. The lead performances from Song Kang-ho and Kim Ok-bin are every bit as intense as the direction, and the whole movie has a manic sense of danger that never lets up. It's totally insane, in a good way. 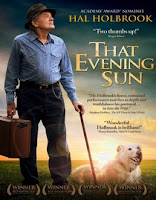 10. That Evening Sun (Scott Teems, 2009) I probably would have had this on my 2009 best-of list if it had made it to Vegas theaters in time, but as it stands I didn't get a chance to see it until it opened here in February. It's a lovely little character study with a great (and rare) lead performance from Hal Holbrook, playing an irascible old farmer who refuses to leave his land even when his son leases it to a new family. Teems paints an evocative portrait of the South as a region poised between tradition and modernity, and Mia Wasikowksa, who had a hell of a year in 2010 (with both Alice in Wonderland and The Kids Are All Right), does nice supporting work as a teen who tentatively bonds with Holbrook's old coot. Read more in my review.

Josh, just browsing blogspot and found your movie reviews. Gonna go find 'em and watch 'em, again or for the first time. Thanks for the fun, thoughtful comments.
On another note, I see lots of horse ads - savvy club, saddles, etc. Is it me or are you a horseman? Just wondering.
The best to you in the new year!

Thanks for the kind words about the reviews. It's always nice to reach a new reader.

As for the ads, I think it's just you, since Google tailors adds to searches, etc. I just see movie-related ads.

No honorable mention for Mixed Nuts? So sad.