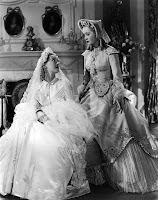 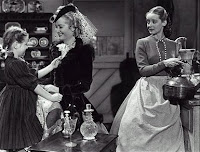 In short, it's a bunch of typically overwrought melodrama, and Hopkins plays it to the hilt. Davis, however, keeps things much more low-key, and conveys Charlotte's anguish with her eyes better than Hopkins manages with her entire body. The woe-is-me stuff gets awfully overdone after a while, especially in the movie's final section as Charlotte's daughter is grown up, about to get married herself and acting like a whiny ungrateful brat. In between the silliness, The Old Maid makes some pointed comments on the hypocritical sexual mores of the Civil War era, although really a movie set in 1939 about a woman with an illegitimate daughter could feature many of the same plot points. Most of its social relevance gets drowned in over-emoting anyway, but Davis manages to make Charlotte's emotions feel earned all the way through until the end.
Posted by Josh at Sunday, February 06, 2011