The bargain-basement Mexican sharksploitation movie Tintorera: Killer Shark is just one of many opportunistic '70s Jaws ripoffs, but it achieved infamy for its use of real sea animals being injured and killed in scenes of the main characters hunting for sharks. The transition between bloody underwater slaughter and sleazy sexcapades is rather jarring, although the unseemly tone of the whole thing ties it together. It's not like director Rene Cardona Jr. was interested in some kind of radical verisimilitude, either -- there just wasn't any concern with animal welfare on movie sets in Mexico at the time, and it was a lot cheaper to spear actual animals than mock up fake ones to use. I don't know if indifference or malice would be the sadder motivation.

And all of those animals died in vain, too, bringing about this totally shitty movie. Cardona barely seems interested in shark attacks at all, spending most of his time focused on the sexual exploits of his main characters, American rich guy Steven (Hugo Stiglitz) and his Mexican friend/rival Miguel (Andres Garcia). Steven, wealthy for unspecified reasons, shacks up off the coast of a beautiful Mexican resort town in his fancy yacht, coming ashore to lure hot young women with gross pick-up lines and his ever-present creepy leer. No matter what Steven is doing, Stiglitz always has a look in his eyes like he's on the verge of sexual assault, and whoever dubbed in the English-language dialogue sounds just as sociopathic.

Steven even meets Miguel when they both happen to sleep with the same woman (she's later eaten by the shark, although neither of her paramours knows or cares), and they bond over their shared womanizing. Eventually they also bond over their enjoyment of shark-hunting, which they engage in even before they know that a killer tiger shark (or "tintorera") is on the loose. This is certainly the most environmentally unfriendly shark-attack movie of all time; in addition to killing sea animals for fun, in one scene Steven throws an empty champagne bottle off the side of his boat into the ocean, and then tosses in the glass, too. You could almost look at this movie as a revenge fantasy from the perspective of the shark, who gets back at these unfeeling murderers who are constantly killing its kin. 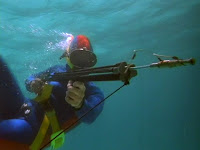 Cardona doesn't see it that way, though -- not that he has any sort of message here at all. The movie is just a vehicle for lots of nudity and occasional animal attacks, and a pretty weak one at that. Apparently there's a longer Mexican cut of the film that's 40 minutes longer than the American release I watched, and I can't imagine how there could be 40 more minutes of anything in this movie, unless it's just extended footage of topless girls swimming (which I suppose I could support). The sheer sleaziness can be kind of amusing, although the animal abuse certainly dampens the entertainment value. Better to stay away and not support this sort of thing at all.
Posted by Josh at Tuesday, August 02, 2011